Pieces of mosaic come together for Old Globe's 70th year

The Old Globe has a lot of celebrating to do this year: 2005 marks the theater's 70th anniversary, Artistic Director Craig Noel's 90th birthday, the return of the Shakespeare Festival, the addition of Jerry Patch as resident artistic director, and an eclectic winter season that features two world premiere musicals, classics and provocative new plays. 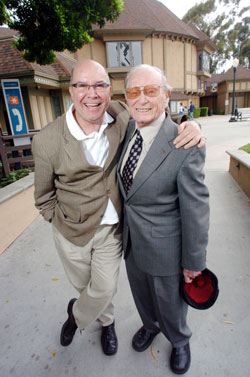 The Globe's summer season will see the return of the Shakespeare Festival, which will once again be led by Darko Tresnjak. After a nearly 20-year absence, the Globe brought back Shakespeare in repertory for the 2004 summer season. The large resident acting company consists of professional actors and 14 graduate acting students from The Old Globe/University of San Diego Master of Fine Arts program.

The festival this year includes "The Comedy of Errors," "Macbeth" and "The Winter's Tale," all three of which -- by mere coincidence, claims Tresnjak -- were featured as part of the Globe's inaugural season in 1935 as part of the California Exposition.

Tresnjak will helm the two comedies, while Paul Mullins will direct "Macbeth." The three plays will run in nightly rotation in the outdoor Lowell Davies Festival Theatre from June 19 through Oct. 2.

To kick off the summer festival, the Globe will host a free open house June 18. The event will feature short Shakespeare presentations by the 2005 Shakespeare Festival company, Elizabethan treats, family activities and more. Actress and Globe associate artist Marion Ross will serve as the master of ceremonies.

The summer season also includes Ron Hutchinson's "Moonlight and Magnolias" and the world premiere of David Rambo's "The Lady with all the Answers."

"Moonlight and Magnolias" takes audiences back to Hollywood, 1939, in a fun, fast-paced comedy about how three men saved the film "Gone with the Wind" in just seven days. Hutchinson's play runs July 16 through Aug. 14. "The Lady with all the Answers" is drawn from the life and letters of advice columnist Ann Landers, and will run Aug. 6 through Sept. 11.

Beginning June 1, Jerry Patch joins the theater in the new position of resident artistic director. Patch is currently the dramaturg at the Tony Award-winning South Coast Repertory theater in Orange County, where he has coordinated the development of 150 new plays, including three Pulitzer Prize winners. Artistic Director Jack O'Brien called Patch "the other piece of the mosaic of imagination" at the Globe, along with himself and Tresnjak.

The theater will celebrate Artistic Director Noel's 90th birthday on Aug. 25 with a special dinner in his honor on the Globe stage.

The Globe recently announced its 2005-2006 winter season, which kicks off with the world premiere of "Chita Rivera: The Dancer's Life" by Terrence McNally and choreographed and directed by Graciela Daniele. The Globe scored the premiere after its scheduled summer run at Los Angeles' Ahmanson Theatre was canceled due to reported funding problems. It opens at the Globe Sept. 10.

The show celebrates the life and career of Two-time Tony winner Chita Rivera, along with those of her more famous collaborators like Bob Fosse, Jerome Robbins and Gower Champion. Rivera originated the roles of many of Broadway's most famous shows, including "West Side Story," "Chicago" and "Kiss of the Spider Woman."

Also in the lineup is another world premiere musical, conceived and choreographed by Twyla Tharp ("Movin' Out," "The Catherine Wheel"). The as yet untitled show will feature the music of Bob Dylan in a fusion of theater, music and dance, and is scheduled to open Jan. 25, 2006.

Dakin Matthews' "The Prince of L.A." will run Sept. 24 through Oct. 30 in the Cassius Carter Centre Stage. Winner of the L.A. Drama Critics Award for Outstanding New Play, the show is a funny and poignant exploration of character and faith in the midst of corruption in the Catholic Church in present-day Los Angeles.

The usual holiday offerings will return this year. Dr. Seuss' "How the Grinch Stole Christmas!" is back for its eighth year, directed by O'Brien, and runs Nov. 19 through Dec. 31.