Photojournalist Steve McCurry is most famous for his haunting "Afghan Girl," the portrait of a 12-year-old refugee that appeared on the cover of "National Geographic" in 1985. The girl with the arresting green eyes -- flecked with fear and dignity -- was forced to make a two-week trek out of the perilous mountains of Afghanistan after her village and family were destroyed by Russian helicopters. 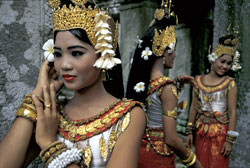 The portrait is one of the most widely recognized and reproduced photographs ever made. It was named one of the top 100 "National Geographic" photographs.

"Afghan Girl" and about 60 other color photographs by the renowned documentary photographer will be on view at the Museum of Photographic Arts (MoPA) in Balboa Park beginning May 29. The exhibition, "Steve McCurry: Photographs of Asia," provides a window into the people and cultures of the Asian continent, and runs through Sept 25.

McCurry's career was launched in 1979 when, disguised in native garb, he crossed the Pakistan border in native clothing into rebel-controlled Afghanistan just before the Russian Invasion. When he emerged, he had rolls of film sewn into his clothes. The images were published around the world and were the first to demonstrate the conflict there. For his coverage in the war-torn nation he won the Robert Capa Gold Medal for Best Photographic Reporting from Abroad, an award dedicated to photographers exhibiting exceptional courage and enterprise.

Since then McCurry has been a member of the prestigious Magnum Photo Agency, published books, won many of photojournalism's highest awards and covered areas of international and civil conflict. He is now a freelance photographer working on the Asian Continent for National Geographic, Time, Newsweek, Geo and other publications.

His documentary photography has taken him all over the world to find what he calls the "unexpected, the moment of serendipity." He has covered conflicts in Burma, Yemen, Kashmir, Cambodia, Beirut, the Philippines, the Iran-Iraq War and the disintegration of the former Yugoslavia, yet his focus is not the wars themselves. He focuses on the human face of war. 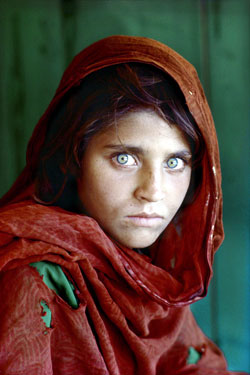 "Steve McCurry: Photographs of Asia" highlights the rich history and the faces of the many places he has visited. The exhibition includes photographs from his travels in Asia, from Pakistan to Afghanistan, India, Nepal, Tibet, Myanmar, Thailand and Cambodia.

With the inauguration of this exhibition, McCurry has established a nonprofit educational relief fund called ImagineAsia that assists in health and education issues among the people and nations he photographs.

"McCurry has become a photographer of sensitivity and involvement not unlike Sebasti“o Salgado. What he sees, he honors by way of wanting us to see not just beauty in countries different from the West, but something of ourselves there," said MoPA Curator Carol McCusker. "I also brought the exhibition to MoPA in order to keep the people affected by the war and the tsunami in the public's consciousness."

The most effective and affecting photojournalism not only communicates an idea, issue or story, but also provokes action. In the case of the Afghan girl whose face so intrigued viewers that she became famous across the world, McCurry found the grown woman in 2002 and she again graced the cover of "National Geographic," 17 years later. Sharbat Gula survived the refugee camp in Pakistan and returned to a remote area of Afghanistan. She is now married with three daughters. Because she came to symbolize the suffering -- and resilience -- of an entire generation of Afghan women and their children, the National Geographic Society created a special fund to assist in the development of educational opportunities for young Afghan women and girls.

"Steve McCurry: Photographs of Asia" is accompanied by a catalogue and was organized by Curator Wendy Blazier of the Boca Raton Museum of Art in Boca Raton, Fla. The photographs are from the collection of the artist.

MoPA will host the artist for a lecture and book signing on Thursday, Sept. 15 at 7 p.m. in the Joan and Irwin Jacobs Theater.

The museum is open daily from 10 a.m. to 5 p.m., except on Thursdays, when it is open until 9 p.m. Gallery admission is $6 adults; $4 students, seniors and military; and free to members, and children under 12. Admission is free to the public on the second Tuesday of the month.