Stella Gibbons' novel, "Cold Comfort Farm," was first published in England in 1932 and met with great critical and popular success. It was adapted for the stage by Mabel Constanduros in 1936 and Paul Doust in 1991, and in 1965 a musical version was produced. The novel was also twice adapted to film, most recently in 1997 starring Kate Beckinsale. 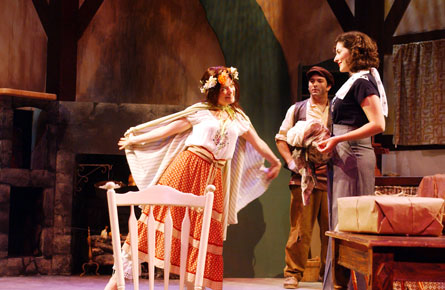 But when "Cold Comfort Farm" opens on Lamb's Players Theatre's stage Friday night, it'll be the first time American audiences get to see a live production of Gibbons' satire of the English rural novel.

"Most people don't know about Stella Gibbons' novel," said director Robert Smyth. "It's like 'Huck Finn' over here -- everybody knows it in England, but it's just not known here, because it's really got an English sensibility to it."

Still, Smyth said there's a lot of universal truth -- and humor -- in the story that American audiences will readily recognize and relate to.

The U.S. premiere of Doust's adaptation, which the folks over at Lamb's like to call "Jane Austen meets Monty Python," is a send-up of the tortured rural novel. It parodies the stylistic traditions -- the dark romance, deep melancholies and poetic expanses -- set forth by writers like Emily BrontÎ, Thomas Hardy and D.H. Lawrence.

The play tells the story of smart and poised Flora Poste, a young woman from London who moves to gloomy Cold Comfort Farm to reconnect with her long-lost extended family. She attempts to bring order to the chaos of her dysfunctional, loony family, which includes a fire and brimstone preacher whose flock call themselves "the Quivering Brethren," a mute girl, a poetry-writing cousin, a soft-spoken hunk and an old matriarch madwoman.

Taking on the role of Flora is Sarah Zimmerman, who seems happy to return to Lamb's after a four-year stint in New York. The actress appeared in the Broadway productions of "The Rivals" and "The Full Monty," and was recently nominated for a Helen Hayes Award for her role as Irene Molloy in "The Matchmaker" for Ford's Theatre.

But Zimmerman said she's always felt like San Diego was home. The young actress first appeared on the LPT stage when she was just 15.

"It was my training ground for everything I do now," she said in a recent interview. "There's such an intimacy (at Lamb's) that I don't think you can find anywhere, really, and I think that's such a great foundation. Normally it takes a month to trust the person that you're playing a scene with. But to instantly trust everybody around you and go from there -- it's a remarkable way to play."

Her character, Flora, represents refinement, progress, culture and the voice of reason surrounded by zany relatives.

"That's what's so much fun to see. Every character represents somebody in your life in some way," said Zimmerman, "and it's thrilling to get to just get to stand in the face of that and respond to that, to break it apart."

In the midst of the screwball comedy, the play also has something to say about our notions of order and chaos, nature and society. Gibbons' novel challenged the romanticization of the pastoral, a perspective many of us still cling to today.

"Nature in its true form is chaotic, so if you put people in a situation where they're allowed to just fester in a natural, open but dysfunctional way, they will present not beauty but chaos," explained Smyth. "There is a certain reality about the need for discipline and clear thought. When you bring discipline and hope to something -- that's what makes it beautiful."

"It's very odd," he said, "to have a play that's this wacky and farcical at times, that is also this wise."