Equipped with computers and fortified by caffeinated beverages, playwrights will feel the pressure of a looming deadline this weekend as they rush to complete their piece of a high-speed micro-theater experiment called Instant Theatre. 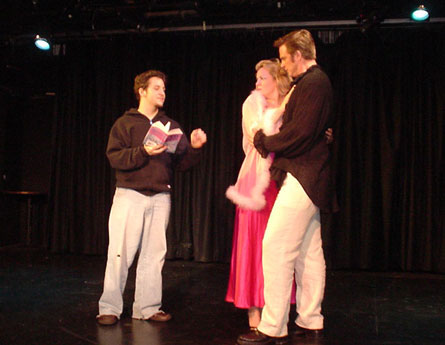 It usually takes weeks or months to mount a theatrical production. But this weekend, teams will have just 24 hours to create and stage a bunch of short, original plays.

The concept is simple. Gather a bunch of writers, directors and actors together, and give them one day to put on a bunch of five- to seven-minute plays.

The execution, though, is a little trickier.

The participants will meet up for orientation Saturday, where they'll be given random assignments -- one writer paired with one director and anywhere between two to five actors -- and the first line of dialogue. Then it's up to the teams to work together and produce, 24 hours later, a skit which will be performed live and off book Sunday, at 6 and 8 p.m. at 6th @ Penn Theatre.

The process boils theater down to its essentials, putting professionals and amateurs on the same playing field and challenging artists in new ways.

"This experience will be wonderful for me because a lot of times as a writer you stop and put things off, pace yourself too much or stop before you put pen to paper because you convince yourself your ideas aren't good enough," said playwright Stacy Michelle Walker. "I don't have that luxury in this situation. I have to write, I have to risk things. I have to risk the fact that maybe the actors will hate the script that I come up with. Maybe they'll demand I rewrite the entire thing with a few hours left.

"It will help me develop a thick skin."

And all the while the clock will be ticking. David McAtee, a freelance commentary and fiction writer who hasn't previously written for the theater, said he's used to working under tight deadlines.

"It doesn't scare me," McAtee said of the time constraints. "Deadlines are always intimidating, and this is the ultimate deadline compressed into 24 hours. It'll be something that's going to test my mettle."

The key, said both writers, is to be mentally prepared. Since the point is to create a new work, and writers aren't supposed to come in with preconceived material, that means a lot of creative brainstorming and practice with improvisation.

"I keep myself writing a little bit every day, and I'm constantly thinking of things that are not necessarily reliant on specific location, that are universal," said Walker. "Basically I'm keeping sharp, keeping myself aware of things so that I can be spontaneous and run with it and we can all work together."

Collaboration, it seems, will be the key. Players will have to rely on each other and discover and exploit each other's strengths to get through the process. And positive interchange between participants is one thing event producer Raab Rashi hopes will come out of the event.

"It's a great networking experience," Rashi said. "They'll get to meet lot of people in the San Diego theater scene. It's unlike any other artistic project they've worked on."

Rashi brings Instant Theatre to town after successfully participating in similar events in New York and New Jersey. But this weekend will mark the first time it's been attempted in San Diego.

If all goes as successfully as his East Coast experiences, Rashi hopes to make Instant Theatre a regular event, hosted in a larger venue. With a possible 64 participants, they won't even get to see their peers' work in the 49-seat 6th @ Penn Theatre (they'll watch a video of the productions). But Rashi seems confident that the artists will rise to the challenge, and that audiences will be rewarded with intriguing theater.

"Every time I've done this project, there are a few that get expanded to larger pieces," said Rashi. "I've seen some of the most exciting performances as well. With five to seven minutes, it forces writers to create a concise picture in that time. They might not get the reaction they anticipated, but in the past all the pieces have stood up for themselves."