A radiant Maxfield Parrish makes believers at the SDMA

Maxfield Parrish's instantly recognizable images of nymphs in Arcadian landscapes never fail to capture the imagination. More than 80 of his works will be presented in "Maxfield Parrish, Master of Make-Believe," at the San Diego Museum of Art through Sept. 11. 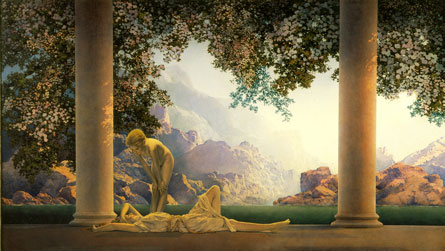 Maxfield Parrish's 1922 painting "Daybreak" became a pop icon of the 1920s, and is now part of the San Diego Museum of Art's exhibition, "Maxfield Parrish, Master of Make-Believe."

The nationally touring exhibition features many of the master illustrator's most famous works, including his popular calendar and book illustrations, his signature classicized paintings, and the mural he painted for the Long Island studio of Gertrude Vanderbilt Whitney. The exhibition also explores Parrish's artistic development and his working methods, with the aid of documentary photographs, demonstrating why he is counted among the best-known and most beloved American artists of the 20th century.

"Parrish's work, his creative method, and his imaginative subject matter will resonate with visitors of all ages," said SDMA Executive Director Derrick R. Cartwright. "His imagery balances the popular and fantastic in a way that has secured him a lasting place in the history of art in the United States."

Parrish (1870-1966) considered himself a commercial artist, though he studied fine art at the prestigious Pennsylvania Academy of Design. His immense popular success was partly due to his application of the newly developed, high-quality color printing techniques. Parrish transformed his paintings into America's first mass-produced art posters, and created a unique style -- part illustration and part fine art -- tailored to the strengths of the new printing process.

The SDMA exhibition includes examples from each phase of Parrish's career, beginning with his illustrations for children's books such as "Mother Goose in Prose" and "The Golden Age." The illustration "Alphabet," included in the exhibition, is among the examples of Parrish's early work.

Magazines were an ideal showcase for his luminous paintings, and Parrish's work was featured on the covers and inside Colliers, Scribners, Harpers Weekly, Hearst's, Ladies' Home Journal, Life, McClures and more. Many of these issues are prized by collectors today.

But Parrish is best known for his annual production of calendar art for Edison Mazda, a manufacturer of electric lamps from 1918 to 1934. Through these images, depicting toga-clad figures in fantastic landscape settings, Parrish challenged the technology of his day by pushing for advances in color lithography. The result was an entirely new and vivid form of printing never before seen.

Parrish's meticulous painting method involved alternating numerous layers of thin, transparent oil with varnish over stretched paper, creating works of great luminosity and extraordinary detail. Among the highlights of the SDMA exhibition is his 1922 painting "Daybreak," featuring a female figure greeting the first rays of sunlight. It became a pop icon of the 1920s, selling more than 200,000 prints and appearing in hotel lobbies, college dorm rooms and homes across America. It was a marketing triumph that secured the place of inexpensive, popular fine art reproduction during the 20th century and guaranteed Parrish's fame as one of America's most recognizable artists.

He composed his paintings with the aid of photographs, which allowed for the prolonged study of a model to ensure the accurate portrayal of the figure's anatomy. His wife Lydia and their three children, especially middle daughter Jean, appear frequently as models, as demonstrated by a selection of examples in the exhibition. His most important model was Susan Lewin, his mistress and muse who began posing for him in 1905 and stayed with him until 1960.

The exhibition also includes a rare opportunity to view the spectacular murals commissioned by arts patron Gertrude Vanderbilt Whitney, including the largest single work ever created by Parrish. "North Wall" is comprised of five panels, the longest of which measures 18.5 feet, and features a color cast of characters gathered for what looks like a Renaissance ball.

In the 1930s, Parrish moved away from figural work to focus on pure landscape painting. His decision echoed the mood of the country; during this period of economic hardship and social upheaval, images of domestic comfort in peaceful, idyllic settings became very popular to those suffering through the Great Depression. As the United States moved toward World War II, there was a renewal in nationalism echoed by Parrish's landscapes. While not overtly political, the artist's landscapes proclaimed the beauty of the American land. After the war, the popularity of Parrish's landscapes persisted because they embodied the stability and prosperity of the American way of life.

Parrish continued painting until he was about 90 years old, and died at 96. But his works continue to inspire successive generations who rediscover the imagination and romance of his art.