The truth in history can be hard to pin down. Despite being entrenched in the past, history is a living, breathing, mutable thing, as is made abundantly clear in Doug Wright's absorbing play, "I Am My Own Wife." 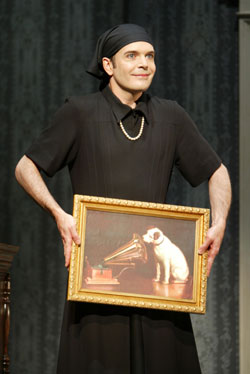 Jefferson Mays is a one-man tour de force as cross-dressing Charlotte von Mahlsdorf in "I Am My Own Wife," now playing at La Jolla Playhouse. Photo by Joan Marcus

The one-man drama began as a Page to Stage production at La Jolla Playhouse in 2001 and now returns to the Playhouse as part of a national tour, with a pile of accolades behind it including a Pulitzer and two Tony awards. Jefferson Mays also revisits the role he originated as the indomitable Charlotte von Mahlsdorf, a German transvestite and furniture collector who survived the repressive Nazi and Communist regimes -- in a dress.

Mays deftly moves between von Mahlsdorf and three dozen other major and peripheral characters, lending to the themes of personal transformation, shifting political alliances and the mutability of history. His seamless permutations through all these personas, their multinational accents and their mannerisms is impressive, but it is Mays' portrayal of the quietly unyielding, enigmatic von Mahlsdorf that is most startling.

Decked in black dress, a strand of pearls, thick orthopedic black shoes and a black kerchief, Mays plays her with the appropriate touch of affection and skepticism, guided by MoisÈs Kaufman's straightforward direction.

The impetus for "Wife" was the playwright's own discovery of von Mahlsdorf in the early 1990s. The script is culled from historical documents, Wright's correspondence with his subject and more than 500 pages of transcribed interviews.

Von Mahlsdorf's life is certainly a fascinating one. Born Lothar Berfelde in 1928, as a boy she quickly realizes her sexuality with the help of a sympathetic aunt. She survives an abusive father, a Nazi firing line, Communist repression of gay life and the East German secret police. She even becomes something of a celebrity after the fall of the Berlin Wall.

Through it all she collected the remnants of the 20th century that were being destroyed by two brutal regimes. She turned her home into a museum of antiquities, represented here by set designer Derek McLane's massive back wall filled to the rafters with gramophones, clocks and furniture.

But the playwright, who wrote himself into the play, saw something more in her story. "Charlotte doesn't run a museum, she is the museum," says Wright. Both playwright and subject are documentarians of sorts. Von Mahlsdorf preserves 20th century European culture and political history through objects, while Wright also traces scarcely told queer history.

Von Mahlsdorf says she never refurnished any of the furniture because defects are proof of the living. Wright also seems to be making the claim that he presents von Mahlsdorf's story as is, with all the cracks, missing pieces and peeled paint.

But the crux of the drama lies in the possibility that von Mahlsdorf cooperated with the Stasi, the German secret police, perhaps even informing on others. And here the truth gets hazy. Von Mahlsdorf tells her own version of events. The gay playwright admits that he has a personal bias and a need to believe in her stories just as much as she does.

This intriguing footnote of moral ambiguity leads audiences to question history and motivations. It also makes "Wife" more than just a story of what you'd do to survive in a hostile world, giving the drama more dimension and providing the talented Mays yet more layers to explore.

PROGRAM: "I Am My Own Wife," directed by MoisÈs Kaufman

Show times: Tuesdays through Saturdays at 8 p.m.; Sundays at 7 p.m.; Saturday and Sunday matinees at 2 p.m.