At a time when fear and patriotism go hand in hand, when the California governor welcomes armed vigilantes patrolling the border, and a massive triple border fence is being pushed in San Diego, the term "border crosser" has become a profanity. But for Guillermo Gómez-Peña, the words have a different connotation. 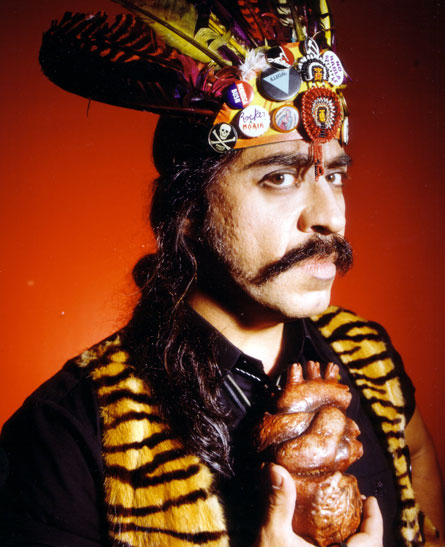 The performance artist, writer and satirist is a proud border crosser -- navigating not only the U.S.-Mexico border, but also crossing social, political, artistic and cultural boundaries.

Gómez-Peña will perform his latest barrier-breaking piece, "Mexterminator vs. the Global Predator," Friday and Saturday at St. Cecilia's Playhouse as part of Sushi Performance and Visual Art's Takeout Series.

"The only pertinent way to deal with border issues is to use hybrid genres, border genres," said Gómez-Peña. "I was born and raised between two cultures, two languages, and I've been constantly crossing that border for at least 25 years. I cross it by foot, by car, by airplane. I cross it in my dreams, through my friendships. I cross it within my own family, which is divided by the border.

"A performance artist is someone who experiences a permanent crisis of professional identity," Gómez-Peña continued. "We want to be too many things at the same time, and the only way to resolve that is through performance. I always wanted to be a journalist, an activist, a poet, a philosopher, a drag queen, a rocker, you name it. I am able to be everything in my performance work."

The Mexican-born artist came to the United States in 1978, at 23. His "professional identity crisis" has resulted in a number of published books, various arts collectives, regular contributions to National Public Radio, newspapers and magazines articles, and numerous awards for shows performed around the globe.

Gómez-Peña has also been known to push the envelope on stage, involving the audience in what he calls a "form of radical democracy." But his is not the empty contravention offered by radio shock-jocks, talking heads spouting hate, and reality TV shows where wannabe celebs deliberately violate social norms. These serve no political or social purpose. The traditional role of the performance artist, said Gómez-Peña, is to engage in meaningful acts of transgression that push audiences toward epiphany or shatter their sense of the familiar.

"My job is to make everybody feel democratically uncomfortable, to raise impertinent questions in all directions, to question the narrow-mindedness or the shortsightedness of all communities," he said. "The role of art is not to make people happy -- it is to make them think about important issues. And sometimes that's a bit uncomfortable."

Gómez-Peña feels a certain dose of danger is necessary in performance art. Audiences need opportunities to try on different perspectives, identities and values. But his show isn't about spectacle or shock value.

"If my role was to shock I would lose, because there is nothing I can do that can be more shocking than what I see on television or the Internet every day," he said. "All I need to do is read what's happening in Iraq. That is really, truly, emotionally shocking to me." 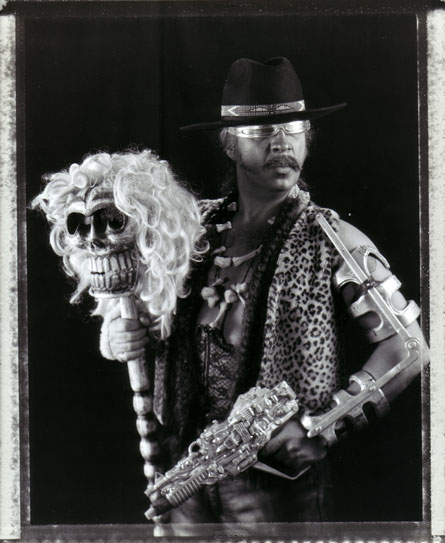 This brings up a new dilemma for contemporary artists: What does radical mean nowadays? Artists in general are rethinking their role in society, he said, searching for a new place within the post-9/11 landscape. To Gómez-Peña, the process of searching for this new voice and space is the performance itself.

"We're seen as extreme provocateurs, a cultural phenomena, as opposed to social thinkers and vernacular philosophers."

In "Mexterminator," Gómez-Peña embodies a number of characters -- El S&M Zorro, El Web-Back, El Traveling Medicine Vato -- to address issues like fear of immigration, censorship, interracial sexuality, and the side effects of globalization and the War on Terror on the U.S. Latino community. But who is the Global Predator? Is it Muslim fundamentalists, President Bush, corporations? In Gómez-Peña's multilayered performance, the answer is open to interpretation. He's just there to slip you across the border to the realm where questions await answers.