Not much happens in Joanna McClelland Glass' "Trying," now getting its West Coast premiere at The Old Globe. The play centers on real-life judge Francis Biddle, who served as attorney general under President Franklin D. Roosevelt and chief judge of the Nuremberg Trials. 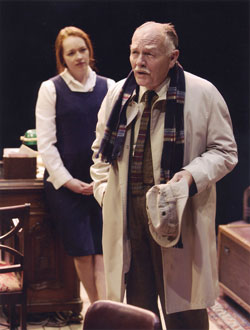 At 81, with death knocking at the proverbial door, the judge hires a new secretary to help him get his affairs in order and complete his memoirs. Then he dies. The end.

But the play, under Richard Seer's graceful direction, is a quietly moving, endearing and humorous take on the odd couple story. The dynamic relationship created by Globe Associate Artist Jonathan McMurtry and Old Globe/University of San Diego MFA graduate Christine Marie Brown is what makes the play interesting and enjoyable.

McClelland Glass based the play on her own experience working for Biddle in 1967-68 during the last year of his life. McClelland Glass' dramatic counterpart Sarah Schorr is likewise a Canadian "prairie populist" from Saskatoon, Saskatchewan, who grew up in a working-class family with an alcoholic father.

At first blush, employee and employer couldn't be more different -- or contentious. "We can't help but find each other extremely trying," Biddle says.

He's an Ivy Leaguer from a wealthy landowning family stretching back generations. He's got old-fashioned notions of propriety and is a stickler for grammar, correcting syntax and usage at every turn. Despite his democratic politics -- he advocated for the rights of Pennsylvania coal miners and eternally regretted not doing enough to stop the internment of Japanese-Americans -- he's a domineering, cantankerous, controlling patrician and intellectual.

Sarah is the latest in a long line of secretaries. Her blue-collar upbringing and genuinely kind disposition seem to stand in direct contrast to her boss. But through her resilience and self-assuredness in standing up to Biddle's bullying, and in the humorous way she matches wits with him, she eventually proves that the two have more in common than they think.

Veteran stage actor McMurtry is known for his physical approach to roles, and his deft portrayal of Biddle is grounded in physicality. He fully embodies the aged judge through his shuffling pace, the stiffness in his joints, his stooped shoulders, the pained movements. Yet through this frailty and occasional excursions into the land "somewhere between lucidity and senility," McMurtry projects Biddle's remarkable intellectual stamina and his force of character.

As Sarah, Brown gives a nuanced and unsentimental performance of a character that could easily fall flat. Brown provides just the right balance of sweetness and aggression, steely determination and servility.

Charlotte Devaux's lovely costume designs take us through the seasons, while Alan Muraoka's set is appropriately stately and cluttered -- providing the requisite opportunity for Sarah to get Biddle's business affairs, checkbook and office cleaned up. Chris Rynne's lighting and Paul Peterson's sound design of period recordings and Mozart sonatas add to the mood and historical context.

The play touches on themes of equality and civil rights, through Biddle's dictated letters and recorded bits of historical speeches. It also points to a women's liberation movement gathering steam but not quite rolling -- when the best work a keenly intelligent young woman might get was as a part-time secretary for an important judge.

But theatergoers expecting insight into the politics and spirit of the era or Biddle's significant place in history will be disappointed. What McClelland Glass provides is a backdrop of politics and history. The focus is entirely on these two formidable personalities who initially clash and are steadily drawn toward mutual admiration and friendship.

And though we know where the story is going, and even how it gets there, the journey is warm and graceful in this smartly written, smartly acted drama.

Show times: Sundays, Tuesdays and Wednesdays at 7 p.m.; Thursdays through Saturdays at 8 p.m.; Saturday and Sunday matinees at 2 p.m.