The Voice 1156 Gallery downtown has a name apropos to its undertaking. The newish gallery space-cum-artists' studio is focused on bringing fresh voices to the San Diego art scene. 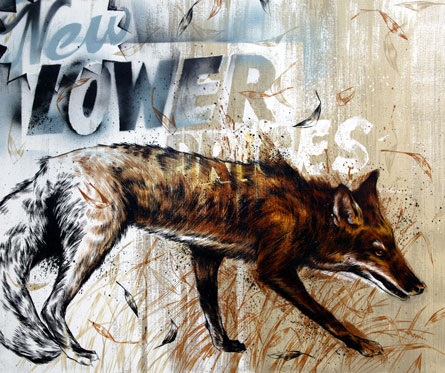 Ben Horton's artwork is now on display at Voice 1156 in "Under These Circumstances," through Feb. 24. The installation also includes work by Pamela Jaeger, Brendan Monroe and Josh Cochran. Photo courtesy Voice 1156 Gallery

Since opening in September of last year, Voice 1156 has hosted a show each month. The gallery's latest installation, "Under These Circumstances," opens Friday and runs through Feb. 24. It features work from local artists Pamela Jaeger and Ben Horton, along with Los Angeles-based artists Brendan Monroe and Josh Cochran.

The gallery provides a place for up-and-coming artists to showcase their work, in a city that curator Mike Maxwell said too often plays it safe when it comes to art.

"It's easier for high-end galleries to show safe, 'in the design magazine behind your couch' sort of artwork," he said. "I'd rather have something more in your face, pushing the boundaries of what is considered art or fine art."

San Diegans, he said, don't get the opportunity to view much cutting edge or experimental art in person. Part of the reason is that there's a lack of gallery space, though downtown's Cassius King and Selective Hearing galleries, and the nearby Voz Alta performance space and gallery, are beginning to fill the void.

Part of it is also education -- learning an appreciation for art and seeing the value in collecting it. According to the 2002 Survey of Public Participation in the Arts conducted by the National Endowment for the Arts, just 20 percent of the overall American population owns original art.

At Voice 1156, Maxwell hopes to bring in younger crowds, get them interested in artwork that speaks to them and maybe even help mold future art collectors. Much of the work shown at the gallery is created by youngish artists influenced by things like graphic design, pop culture, comic books, video games, music, film and fashion. But what all the artists really have in common, said Maxwell, is passion.

"I pick artists who I think do this because they have to, not because it's a side hobby," he said. "This is their life. It's what they do every day. These are artists who really have something to say and want to express that to people."

Voice 1156 also doubles as a studio for a collective of about 15 artists who volunteer their time and talents to running the gallery. Maxwell, for instance, is also a painter and illustrator. Photographer Monica Hoover, who sets up photo shoots in the space, is the gallery's creative director. Sharmila Ray, who does film and video work at the studio, is also the gallery's public relations director. Other artists in the collective, Ray said, include fine artists, a Web designer, graphic artists and stylists.

"We all donate time to the gallery, and we all have jobs to do," she said. "On the side we do our own work, and we work together as a team to put together the gallery."

Once the artists for each show are chosen, they're given a lot of free rein with the space to do with it as they will. For "Under These Circumstances," the artists will utilize the gallery walls themselves as canvases.

If these four featured artists have anything in common, it's that their paintings are based on figurative work. But aside from that, said Maxwell, the show bears no thematic connection.

"I try to stay away from trying to classify things as a whole," he said. "All four styles are really different, but they sort of magically fit together."

Jaeger received a bachelor's degree in graphic design from San Diego State University, and has studied drawing, painting, color theory, costuming and design. For inspiration she draws on fashion and beauty traditions of the past, childhood memories and her own writing. Jaeger's work has appeared in CityBeat San Diego, the San Diego Reader and LA Weekly. Her paintings will also be featured in the upcoming Universal Pictures film, "The Skeleton Key."

Ray described Jaeger's work as dark and somewhat morbid, with a "'Nightmare Before Christmas' feel," referring to the German-expressionist stop-motion film by Tim Burton.

Cochran's artwork is based in "graphic fiction and visceral memories," according to a press release. He works as a freelance illustrator in Los Angeles.