For one weekend every summer, San Diego becomes the pop culture center of the world when Comic-Con comes to town and brings with it hundreds of thousands of entertainment fans and industry insiders alike. And the event's organizers say they would very much like to keep that tradition going. But Comic-Con is growing every year, and space in San Diego is not.

Comic-Con is contracted to stay at the San Diego Convention Center through the year 2012, and David Glanzer, the organization's director of marketing and public relations, said the hope is to stay in San Diego forever. But as the convention keeps growing, that's getting tougher.

"We've maxed out our space," Glanzer said. "There is no exhibit floor space to increase, so we can't have more exhibits on the floor. Last year, we sold out three of the four days of the event, so we can't accept more attendees, so while our income may plateau, I would assume are costs are going to keep increasing." 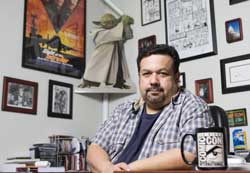 The convention has already spread into the conference rooms of nearby hotels and last year they started using tenting areas outside.

Comic-Con was born in San Diego: The first convention was held in the basement of the US Grant Hotel in 1970, with 300 people in attendance. From there, it moved to the El Cortez Hotel, spent one year at University of California, San Diego, and spent a few years in Golden Hall. It moved into the Convention Center in 1990 shortly after the facility opened, first taking up only one hall. Now, Comic-Con takes up the whole thing.

Last year Comic-Con attracted about 125,000 attendees. Glanzer, who began working at Comic-Con as a volunteer around 1984, said he doesn't remember a specific year or event skyrocketing the convention into the huge draw it has become. He said it was always gradual.

"I think now with Hollywood in particular embracing a lot of comic-book properties, with libraries and schools utilizing comics and graphic novels as teaching and learning aides, with high-profile people admitting that they read comics and all that, it's a viable art form. It's a viable form of entertainment," he said. "But that wasn't always the case."

Comic-Con stopped being just being about comic books decades ago. In fact, Glanzer said it never really was just about comics or the action figures and other toys that tie into them. While some traditionalists may grumble over just how much Hollywood has taken over the event, Glanzer points out that legendary director Frank Capra was a guest at the second year of the show. In 1976, LucasFilm came to promote its upcoming sci-fi movie, "Star Wars." Now, the convention is known as much for its panel discussions with actors, directors and special effects wizards as it is for the cavernous floor space covered with booths from Marvel, DC and Warner Bros.

While Comic-Con has been nicknamed "nerd prom" -- a nod to all the science fiction and fantasy fans that attend, and a characterization some organizers bristle at and others embrace -- Glanzer said organizers never really thought of it as an underground event.

He credits the convention's exponential growth through word of mouth buzz, and noted that most people come to the show more than once in their lives.

"There is something at our show for almost everyone," he said. "There was a period of time when people didn't realize what comic book and comic art truly were. I think a great many people, even to this day, think that comic books are a children's medium only. Well, that would be the same as saying, you know, books are only for adults, or movies are only for teenagers."

Glanzer points out for example that "Road to Perdition," a 2002 Academy Award winning film starring Tom Hanks and Paul Newman, came from a graphic novel.

That's not to say that Comic-Con doesn't attract its share of people others might consider "nerds," those folks who spend hours sewing the perfect Star Trek or Batman costume. They are a part of Comic-Con and in fact one of the organizers' favorite parts, Glanzer said. But he wants people to know that even if they couldn't tell Clark Kent from Peter Parker, they could still have fun at the event.

"Something that really is incredibly gratifying (to see is) people having an amazing time in an environment where they can be who they are," Glanzer said. "There's no aspersions cast on anyone for their size, for their age, for their race, for their gender, for their orientation, for anything ... everybody has value."

A 13-member board of directors, most of whom have been long-time fans of the show and were nominated to join the board, officially runs Comic-Con. The convention's office in La Mesa staffs 16-20 full-time and temporary workers, and about 80 volunteers work on various committees that help organize the show.

The organization has already moved beyond San Diego's borders in some ways: For seven years, it has been sponsoring WonderCon, a smaller comic convention and it also helps run the Alternative Press Expo, better known as APE. Both of those take place in San Francisco. Glanzer said the proceeds from Comic-Con, which is a non-profit organization, help to fund WonderCon and APE.

Despite that, Glanzer said Comic-Con's organizers are hoping to the keep the centerpiece show in San Diego.

"We've been approached by other cities, [but] I don't think anybody wants to leave San Diego. I certainly don't," he said. "It's a perfect fit for us. It's expensive, whether it be paying for the street signs that tell you what streets are closed, or for any police or the hall or any of the myriad things, it's expensive. But it's a great city.

"There's been some talk of expansion of the center, which we would certainly welcome," he added. "Hopefully if everything lines up, we will be here for many more years."