A proposal for three hotels totaling 650 rooms at Liberty Station, where a single Nickelodeon hotel had been planned before the recession, is scheduled to be heard by the California Coastal Commission on Dec. 12 in San Francisco.

Plans currently call for a 252-room, all-suites hotel; a 215 room, residence-style hotel with kitchenettes; and a 183-room hotel with a mix of standard rooms and suites. A total of 701 parking spaces would serve the hotels.

Developer The Corky McMillin Cos. acknowledged that it is in discussions with such firms as Marriott, Hilton and Hyatt to determine which would be the best fit. The property is owned by the city of San Diego. 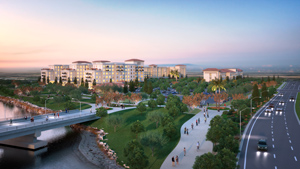 Located in the 2200 block of Lee Court across a boat channel from the rest of Liberty Station, the adjoining hotels will share a 3,180-square-foot restaurant, a pedestrian/bike path, a sand court area for volleyball and a 150-foot-wide esplanade intended to be a major feature that will link Liberty Station with Spanish Landing.

"And the pedestrian path will go all along the boat channel," said Kim Elliott, McMillin senior vice president of land development.

Construction of the public esplanade is supposed to be completed prior to occupancy of the first hotel.

Joe Haeussler, also a McMillin senior vice president, said rather than having a single massive structure as the Nickelodeon would have been, the smaller, four- to six-story hotel buildings "will allow nice views to the bay."

"We've taken great care to protect those views," Elliott added, saying McMillin agreed to orient the buildings in such a way to minimize visual impacts.

Assuming the Joseph Wong & Associates design is approved, Haeussler said, construction could begin later next year or early in 2015 with completion about two years later.

"One of the hotels could be up in about 18 months after the start," Haeussler said.

When asked why the big Nickelodeon hotel never emerged from the ground, Haeussler said that among other things, when the recession hit in 2008-09, debt markets evaporated, especially for 650-room, highly specialized hotels.

"The debt markets have re-emerged for select service but not yet for full-service hotels," Haeussler said.

That said, Haeussler emphasized "the hotel market continues to do very well," and anticipates it will only become stronger during the next few years.

Haeussler, who said the projected cost of the hotels is still being determined, is far from happy about one thing: a proposed $1.89 million Coastal Commission imposed in-lieu mitigation fee to help provide lower-cost lodging from hostels to lower-cost hotels.

The in-lieu fee is calculated by multiplying 25 percent of the total high-cost rooms in a proposed hotel development by the cost required to construct one lower-cost unit in a facility that provides overnight accommodation, such as a hostel or inexpensive motel.

"Although the proposed project involves the construction of three separate hotels, the applicant contends it is not economically feasible for any of the hotels onsite to be offered as lower-cost," the Coastal Commission staff report states."Two of the hotels are projected to be moderately priced, and the all-suite hotel located directly adjacent to the public esplanade is projected to be high cost."

Haeussler couldn't say if that $1.89 million charge could be a deal breaker.

In the meantime, Haeussler said, there are plenty of places all around the city to find affordable lodging.

"There is also affordable lodging along the coast," Haeussler said adding that many of the new rooms at Liberty Station will be affordable to most visiting families.

But first the project has to get built, and money may not be the only concern. A Coastal Commission staff report said the proposed hotels' footprints are close enough to the bay that liquefaction could become an issue.

Because of this, commission staff has urged coastal commissioners to demand a final geotechnical report and a provision to protect the commission from any liability in the event such a problem occurs.

In addition, "because McMillin is not the property owner, but a lessee, it is important the commission be assured that future lessees and sub-lessees are aware of and agree to comply with the special conditions of the permit."

While McMillin was gearing up its plans for the hotels, it also obtained $47 million in permanent financing for the 152,495-square-foot Liberty Station Marketplace at the end of September.