Some of the most interesting examples of Victorian architecture in San Diego County are located in National City. San Diego County's second oldest city was purchased for $30,000 in 1868 by Frank Kimball and his brothers. The brothers set out to develop the property into streets and lots for new residents attracted by the promise of "the best climate in the country." 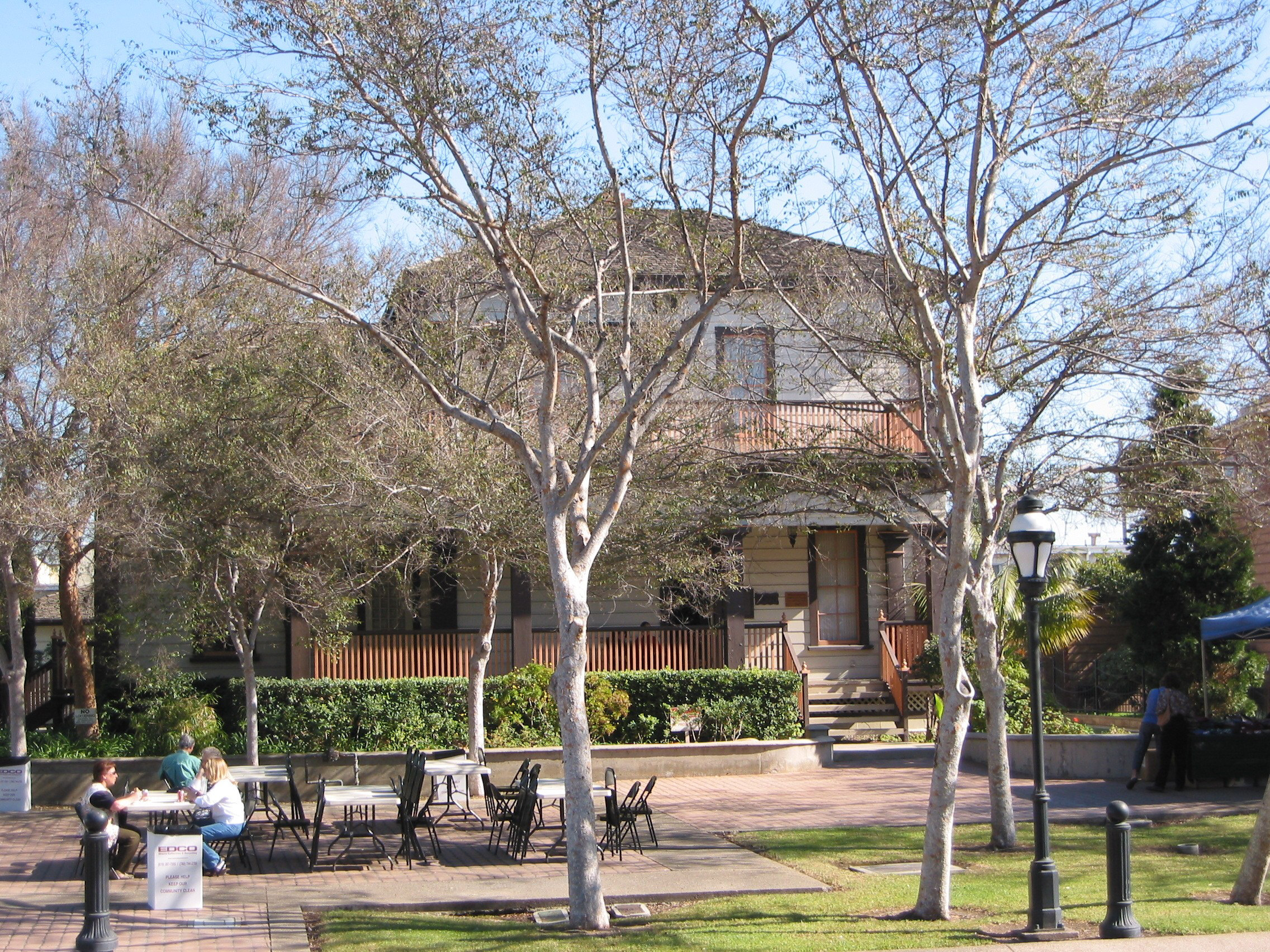 As soon as the ink was dry on the purchase, Frank Kimball and his wife began building their Italianate home. They occupied their new home in August 1868. The house was the first two story wooden house built in South Bay and was distinguished by its indoor plumbing.

The house was the centerpiece of National City for many years and the Kimballs extended bountiful hospitality to new families arriving in the area, sailors home from the sea and once to President Benjamin Harrison and his party. The extensive grounds that surrounded the home were used for Kimball's agricultural experiments including his introduction of olives to the region.

Eventually a growing National City encroached on the home, and it was moved to Heritage Square to prevent its demolition. It is currently owned by the city of National City and is furnished with some original pieces from the Kimball family. 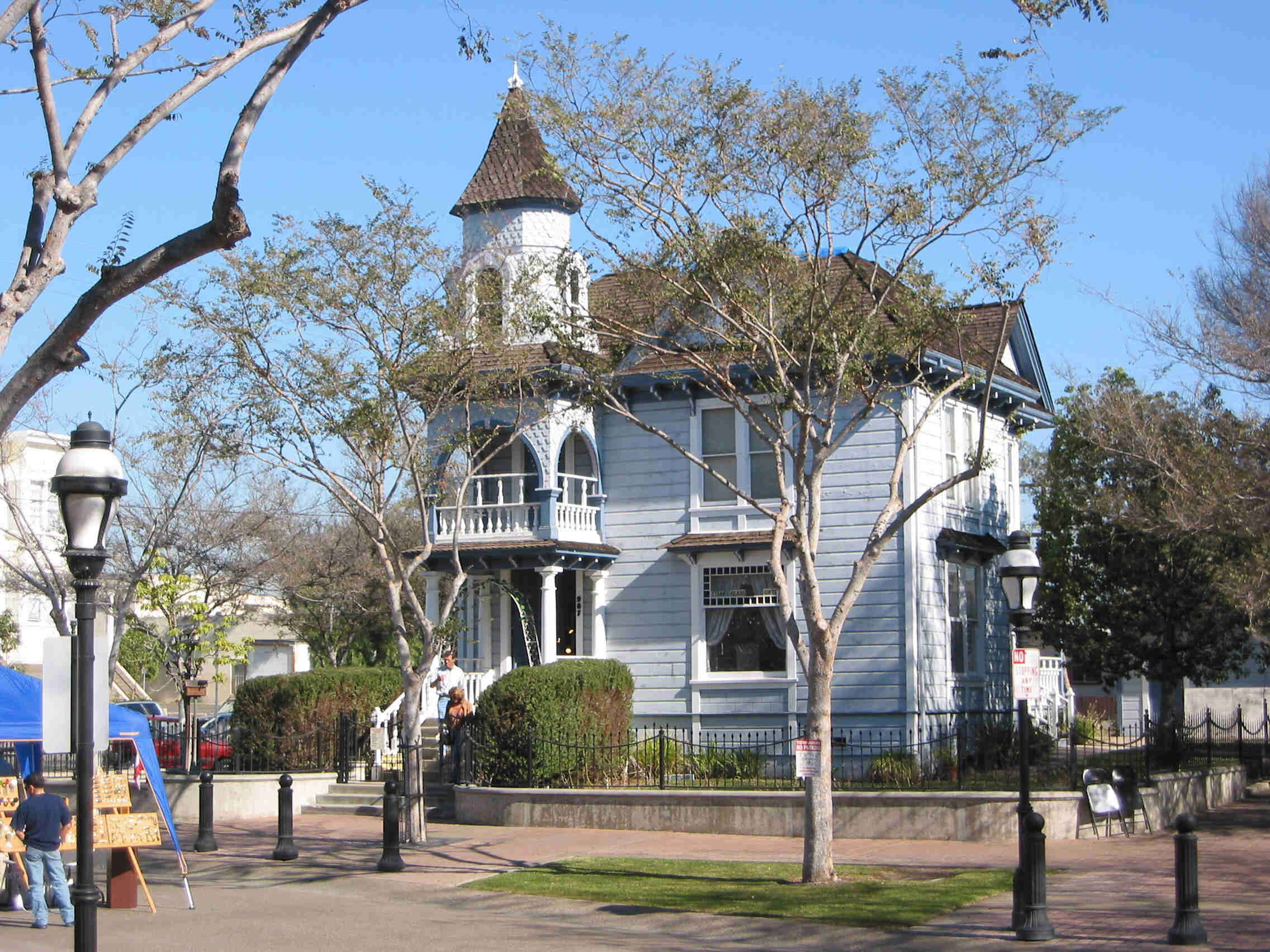 Next door to the Kimball House in Heritage Square is the Steele-Blossum House built in 1879 by contractor Elizur Steele and purchased by the Blossom family in 1883. Steele and his brother John ran a successful contracting firm that built many homes in National City. Eventually they moved to the El Cajon area. Steele Canyon is named for the family. The Blossom's owned a merchandising store on Seventh Ave. (now McKinley Ave.) Charles Blossom named the house El Cipres for the large tree that shaded his front yard.

The house is notable for its detail and its tower, carefully build to a smaller scale so that the house would appear taller. The house was moved from its original location to Heritage Square in 1977 in order to avoid demolition. It is currently the home to Glassworks Studios. The house appears on the official logo for National City. 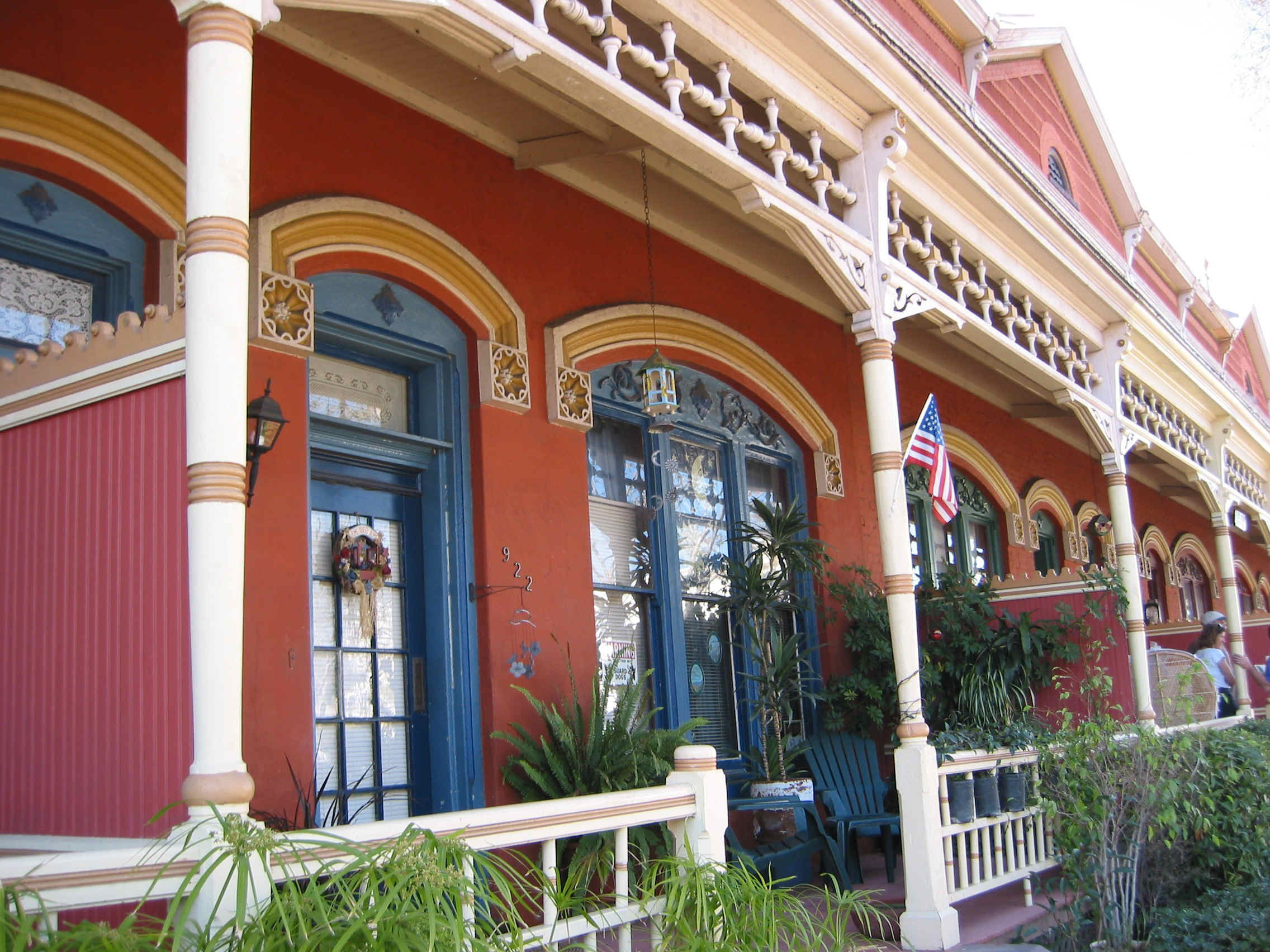 Frank Kimball built the Brick Row as housing for the Santa Fe Railway executives living in National City to build the railroad. The 10-unit row house was designed by R.C. Ball, the architect who designed Folsum prison, to look like row houses in Philadelphia and other eastern cities. It was hoped that these familiar surroundings would make the VIPs feel at home.

Each unit had a formal dining room with a fireplace, a kitchen, a parlor with a fireplace and four upstairs bedrooms. Front doors opened up on a a gracious entry hall with an imposing oak staircase. A wooden porch runs the length of the building with separations attached to the dividing walls so that each unit has its privacy.

The Brick Row forms one side of Heritage Square and is listed on the National Registry of Historic Places. Each unit is privately owned and maintained, but there is a protective covenant that ensures the exterior facade remains in keeping with its Victorian heritage. 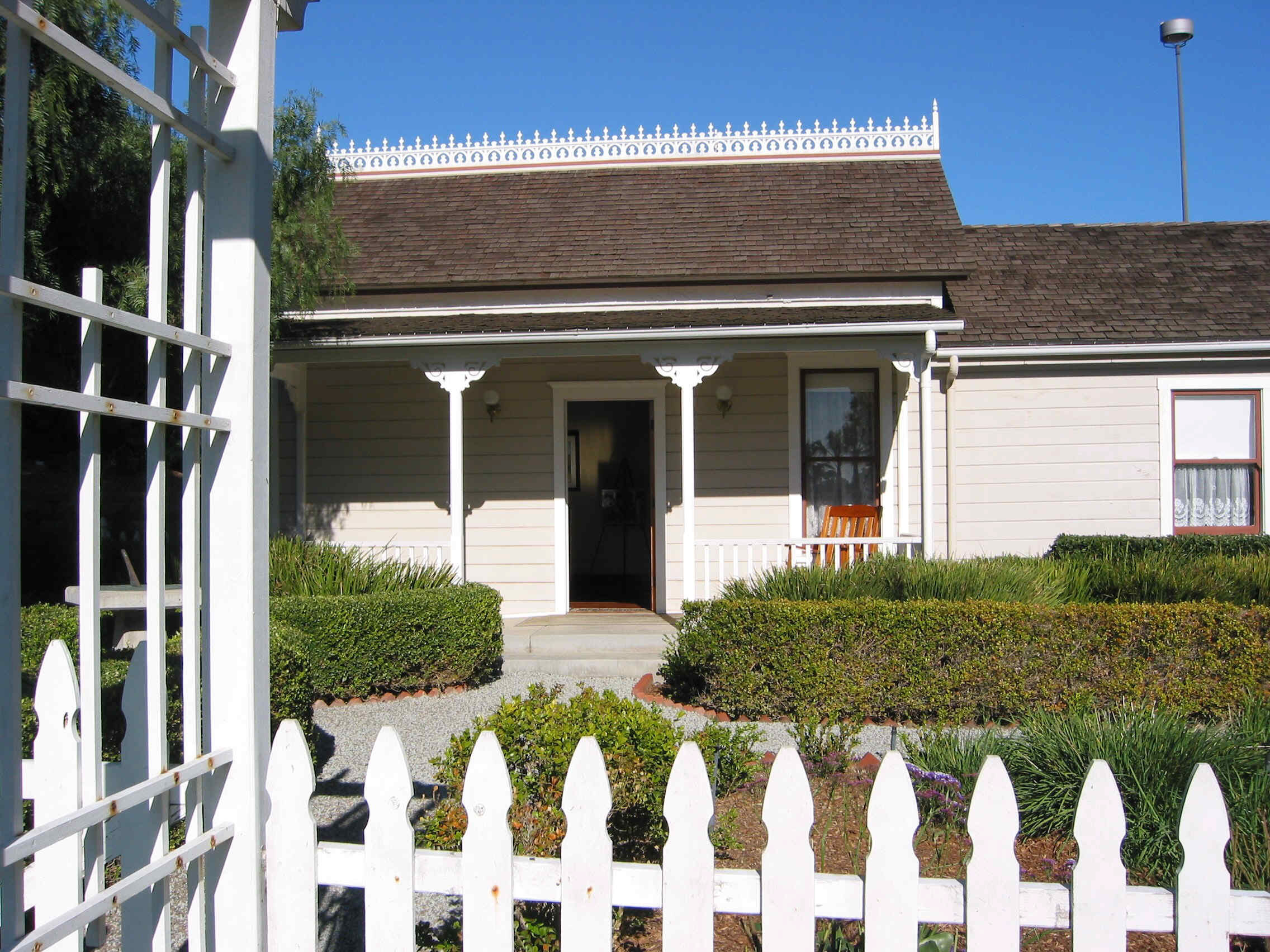 This simple bungalow is the oldest building located on the Paradise Valley Hospital grounds. It was built at the same time as the original Paradise Valley Sanitarium buildings and probably originally housed the sanitarium manager. It has been home to other hospital employees over the years. In 1980, the house was moved to its current location and the main part was restored to its 1880 looks. The kitchen was added in the 1940s and was restored to that period.

The ceilings are the original tongue and groove wood, and one of the rooms is decorated to look like a patient's room in the original sanitarium. Replicas of combination lights; one arm is electric and one is gas. Since electricity was unreliable, gas was the backup. 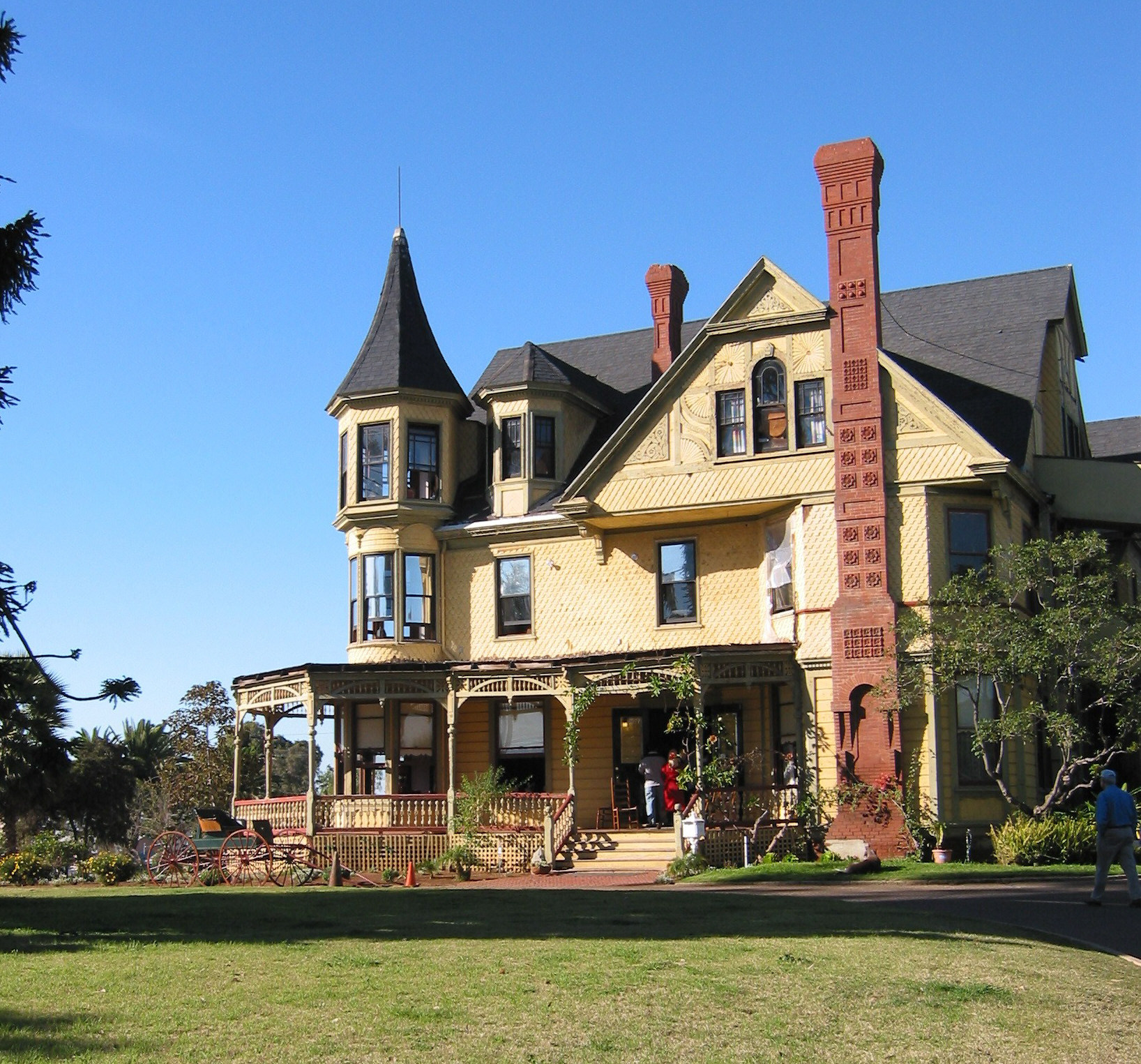 This 18-room Queen Anne home was designed by the same architect that designed the Dell Coronado Hotel. The home was built for Colonel William Dickinson who managed the real estate arm of the California Southern Railroad. Dickinson developed Chula Vista, the Sweetwater Dam and the National City and Otay Railroad.

This house is elegant even today with stained glass windows, a carved stairway of black walnut and numerous architectural motifs. The front porch has an outstanding view of the ocean. In its heyday, the house was the center of National City social life and many celebrations were held in its third floor ballroom.

This two-story Italianate house was built for Ira Floyd who moved to National City in 1876. He had owned a shoe factory in New England, but became a fruit rancher in National City. A practical man he built his barn first and lived in it until he had planted his acres and could build his home.

The exterior of the house is decorated with moldings and extensive detailing. Inside there is a central hall with a staircase leading up to the second floor and five bedrooms. The original ceiling medallions have survived. Ground floor rooms include a parlor, a sitting room, a library, a dining room and a kitchen. There is a matching carriage house.

The house is currently the Casa de Novia, selling wedding and formal attire. Bridal parties use the upstairs rooms as dressing areas for their ceremonies. 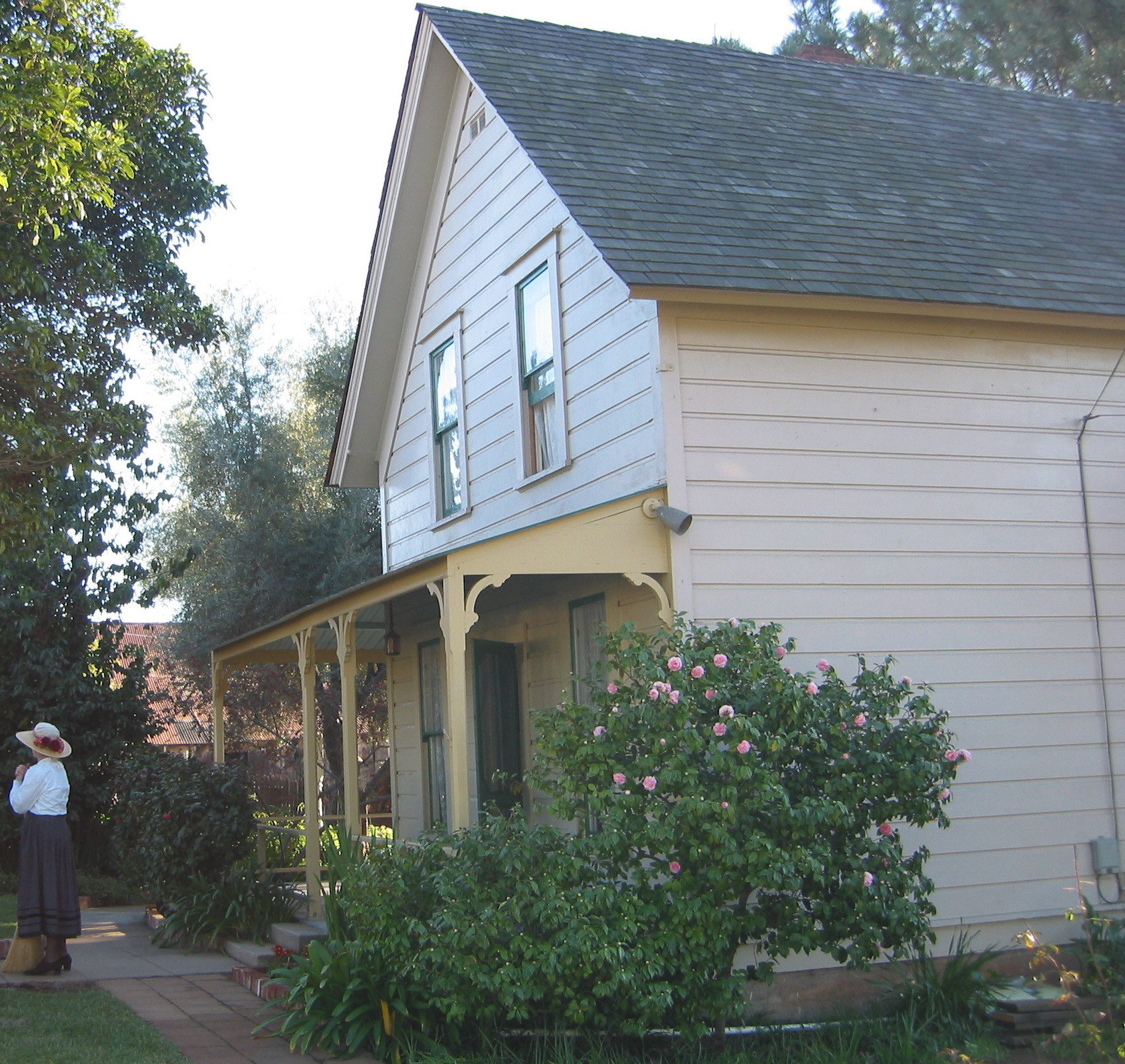 This Victorian farmhouse is surrounded by its barns and fields and has been restored to look much as it would of when the Stein Family built it in 1890. The Steins were part of the German community that settled in South Bay. Originally they homesteaded in Otay, but when the dam was built they purchased 10 acres on F St.in National City. The home from Otay was moved to the site and added to the existing small home that was existed at the site. The barn was built later and stands in its original spot.

The Community Development Commission purchased the farm in 1992 in order to preserve it from demolition. The property has been restored through countless hours of work by dedicated volunteers. Today it is open to school children and the visiting public. In addition to the house,there are chickens, ducks, a pig, rabbits and a collection of farm implements.

The private homes are open to the public along with other local landmarks during the National City Heritage Days Tours held every couple of years.

The Stein Family Farm and the Heritage House are open to the public. The Kimball House and the Steele-Blossum house are open as well. A map of the locations of these houses is available at the National City Chamber of Commerce.

I use to know the people who lived in the Dickinson Boal house back in the 70"s played with the son who's family lived up on the third floor. we use to ride bikes up in his room and was fun to play up in the round turret. I believe at the time the grandpa and grandma lived on ground level the uncle lived on second floor and other part of family on third floor. There use to be a switch back stair way/ ramp that went from the ground up to the second and third levels of the house. also use to know the family who lived across the street in the other large home. we lived at 2505 N. av. now our house was turned into the garden offices. I took my family down to area this summer in august and checked out the area it was fun showing the family the homes....

I live in the Dickinson Boal house, my parents own it. It is a great house to grow up in .