By DOUG SHERWIN, The Daily Transcript
Friday, May 9, 2014

Former U.S. Supreme Court Justice Sandra Day O'Connor is proving that it's never too late to embrace the digital age.

The 84-year-old Texas native who grew up on a cattle ranch in Arizona now frequently uses terms like "unique visitors" and "hits" to talk about the success of her nonprofit group's website, iCivics.com.

The site, which O'Connor helped launch upon retiring from the bench in 2006, uses video games and other interactive content to engage students in civics education.

"Yes, this Arizona cowgirl has gotten involved with video games, and it's working," she said while addressing the Lawyers Club of San Diego's annual "Raising the Bar" dinner Thursday at the US Grant hotel.

During the most recent school year, the iCivics website attracted 6.5 million unique visitors and approximately 11 million games were played.

The video games give students experience in self-governance and civics participation, causing them to learn while they have fun. 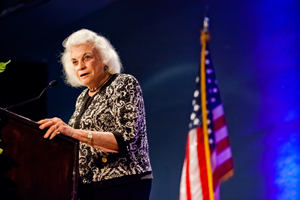 "I see students achieve a sort of muscle memory for civics," she said. "They learn the basic knowledge about democracy and are shown how to apply that knowledge to solve some real problems.

"Best of all, the students who play iCivics have a good time online. We often hear from them. 'Hey, you snuck learning in on us while we were having fun.'"

O'Connor began her career as a deputy county attorney in San Mateo, Calif., and later served as an assistant attorney general in Arizona. In 1969, she was appointed to fill a vacancy in the Arizona State Senate, where she became the first woman in the nation to serve as a majority leader.

That early government experience made her realize that she had a role to play in shaping the character of America.

Her latest mission is to restore civics education in U.S. schools.

"The fundamental skills and knowledge of citizenship are just not handed down through the gene pool," she said. "We have to learn them.

"I really think those of us who operate within the judicial system have a special obligation to help the public understand our role in this great democracy."

She said she is astounded at the lack of basic civics knowledge among American students.

Citing some recent studies, she said less than a third of eighth-graders can identify the historical purpose of the Declaration of Independence, "and it's right there in the name," she joked.

Two-thirds of Americans cannot name a single Supreme Court justice, and only one in seven know that John Roberts is the chief justice, according to O'Connor.

"The more I read, the more apparent it is that our society suffers from an alarming degree of public ignorance when it comes to the way our government is structured, how it works, our system of checks and balances, and the importance of an independent judiciary," she said.

She believes public education is the best way to preserve the county's independent judicial system and to maintain its representative democracy.

"Democracy is a conversation, really, among our citizens about how we ought to govern, but people can't comfortably or effectively participate in that discussion if they don't understand the topic of the conversation," she said.

O'Connor was given the Lawyers Club's Icon Award -- presented to only four other women to date -- in recognition of her contributions to society, which epitomize the group's values of justice, inclusion and progress.

The Lawyers Club also recognized three other award winners for 2014.

Teresa Beck, a partner with Lincoln Gustafson & Ceros, was given the Belva Lockwood Award in recognition of her devotion and outstanding contributions to Lawyers Club.

Amaya, the sole legal counsel for global inventory management company WIS International, was honored for her exceptional leadership and professionalism within the legal community.