Editor's note: This is the third in a series of stories about the recent international legal incubator conference in San Diego.

But Schaumann, like other deans at the second annual International Legal Incubator Conference hosted by California Western last weekend, said the positive effects of incubators also extend beyond efforts to reduce the country’s access-to-justice gap.

He highlighted that the school’s Access to Law Initiative, which has two downtown locations offering space to solo and small-firm practitioners, allows the school to provide ongoing learning for its graduates.

The training and mentoring that is part of the program can be especially helpful to new attorneys in a challenging job market, he said.

“One of the things deans have learned over the last five years is that it is very important that we not view our endeavor as a three-year program, after which our alumni go out into the world and we never hear from them again,” Schaumann said. 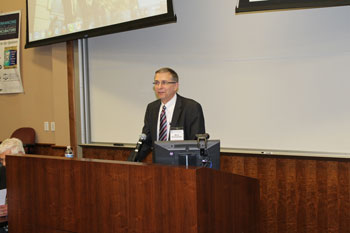 Mary Lu Bilek, dean of the school, said the program has brought UMass Law an advisory board of people who are “movers and shakers” in the Boston bar and local bars that support the incubator’s mission.

“I’m building a lot of support from allies and people in powerful places — people with the capacity to support this program and other justice-related programs of the law school,” she said.

Bilek also said the program has had a positive effect on the law school’s faculty, which she believes will pay dividends for students.

She allows faculty members, many of whom have experience working at small firms, to take relief from an elective and spend a semester working in the incubator as mentors.

Ellen Suni, dean of the University of Missouri-Kansas City School of Law, said the incubator launched through her school in 2011 was an outgrowth of the school’s efforts to help students who wanted to become solo and small-firm practitioners.

She said too many law schools act as if most of their students will go to large law firms, while statistics show that is not the case.

“If your schools are willing to play the reality game, incubators are where the action is,” Suni said.

Some of the deans on the panel said they have been told by admission officers that prospective students like hearing about incubator programs.

“We talk about it at every open house,” said Patricia Salkin, dean of Touro Law Center in Central Islip, N.Y., which operates the Community Justice Center of Long Island.

But the law school leaders also acknowledged that launching an incubator is not without challenges.

Among them are whether tuition dollars should support a program for graduates and what type of liability a law school faces if one of the attorneys in an incubator gets sued for malpractice.

Sean Scott, senior associate dean of Loyola Law School in Los Angeles, recommended that law school administrators who are considering launching an incubator meet with a variety of officials to discuss possible difficulties early in the process.

She said the gathering should include members of the finance, career services, advancement and admissions departments, as well as the risk manager and at least one representative from alumni.

Similar meetings as the process moves along are opportunities for the group to decide how to tackle obstacles, she said.

“If you want to be able to persuade your dean to do this, you have got to do your homework and come up with answers that are very persuasive,” Scott said.

Salkin said keeping things in perspective and with the goal in sight helped her school launch its incubator.

“It was important as a dean to not let the perfect be the enemy of good,” she said.

· Growth of legal incubator movement on display at conference