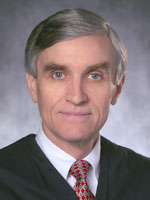 Appointed to the bench in 1995 by Gov. Pete Wilson, Nevitt spent his prejudicial career in the private law sector: associate and later partner, Wright & L'Estrange (1983-95); associate, Sullivan & Jones (formerly Sullivan, Jones & Archer) (1980-83). Upon taking his oath, Judge Nevitt presided over felony trials and then Juvenile Court proceedings. In 1999, he began more than 15 years in the court's Civil Division.

A 1971 graduate of the U.S. Naval Academy, Annapolis, Md., Nevitt spent six years as a Navy helicopter pilot before entering law school and receiving his law degree from the University of Texas School of Law, Austin, Texas in 1980.

"It has been a wonderful environment in which to work – in both capacities. The citizenry of San Diego County can be very proud of their Superior Court and can have great confidence in it," Nevitt said. "It has been a privilege, an honor and a pleasure for me to have served the public in such a fine institution that is both exceptionally well staffed by such able and learned judges and such dedicated and professional court personnel and also very well tended by such an able and professional bar. I will very much miss associating with these enormous pools of talent, erudition, dedication and courage.

"I don't expect to engage in activities for monetary compensation," Nevitt continued. "I'll be pursuing personal interests that I have not had the time to pursue earlier."