By JILL ESTERBROOKS, Special to the Daily Transcript
Wednesday, April 30, 2008

As the leading water expert at the law firm of Buchanan Ingersoll Rooney, Solar navigates the firm's public and private clients through complex and often turbulent water issues.

There's been no shortage of contentious deals and compelling characters in past water rights struggles. The corruption and conspiracy over the scandalous Owens Valley water rights and San Fernando speculative land grab was noir fodder for the 1974 Jack Nicholson-starring movie "Chinatown." 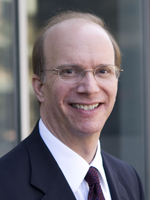 While perhaps not an Oscar-worthy topic -- though who would have thought global warming would be a box office hit? -- Solar does forecast more stormy weather and heated legal battles in the years ahead.

Here in San Diego, he said, a water supply "perfect storm" is brewing.

"Our main source of water, the Colorado River, is drying up. A recent legal decision to protect an endangered fish in Northern California will result in less water coming to the area from our second leading source, the San Joaquin Delta," Solar said. "The region is in a near-historic drought condition; and increasing populating is adding demand for water at the same time supplies are rapidly diminishing."

This isn't just a San Diego County or Southern California concern, he added.

"Policymakers and stakeholders throughout the state and around the nation are challenged by such compelling contemporary issues as municipal water supply, instream flows, endangered species and federal and tribal reserves," said the 47-year-old water authority.

He even views water (or lack there of) as one of the "biggest global issues of the 21st century."

Considering that 80 countries and 40 percent of the world's population is facing chronic water problems, and demand for the resource doubles every two decades, Solar's dire warning doesn't sound too dramatic.

And if oil is the natural resource the world is fighting over now, water might very well be the focus of international conflict in the century ahead.

"I would not be surprised if there were wars over water," he said. "Everybody needs water to live, and it is becoming more scarce. There are substitutes for oil -- they might be costly, but they are available."

The Point Loma resident says the best part of his job "is helping to find creative solutions to real life problems."

"Some folks have advocated cloud seeding to make it rain, and bringing water in bags from Alaska, but those have been relegated to the backburner for now," he said.

To prevent his worst nightmare of "turning on the tap and seeing nothing come out," he promotes desalination, water recycling, groundwater treatment, groundwater banking, water transfers and water conservation as the only ways to combat water shortages.

On behalf of these and other clients, Solar and others in the firm's downtown and Del Mar offices have handled the purchase, lease and sale of groundwater rights, and negotiated deals for privately owned water systems, shares in mutual water companies and public/private partnerships for municipal water systems.

He's also tapped into the groundswell of socially charged water-related issues ranging from global warming and environmental terrorism to the threatened Delta smelt.

And that's not to mention major flashpoints such as "toilet-to-tap" and desalination.

While conservation is clearly important, Solar said because traditional water development is both expensive and controversial, there is now heightened interest in finding new sources of water. Two methods are reclamation and desalination. These have been limited to date because of their high costs, due primarily to intensive energy requirements.

Solar currently serves as water counsel to the city of Carlsbad in its desalination matters. The proposed $300 million plant is to be built by Poseidon Resource on the grounds of the Encina Power Station site south of Agua Hedionda lagoon.

According to Solar, environmentalists opposing the Poseidon plant say its brine discharge, greenhouse gas emissions and use of the power plant's cooling intake system endanger ocean fish. Others are concerned that the project will prolong the life of the power plant (which many would like to see closed down), while some contend that desalinated water is too costly.

"Ultimately, these kinds of lawsuits just postpone part of the water supply solution and could substantially increase the cost charged to customers," he noted.

His work with Carlsbad is just one drop in the bucket overflowing with other local, regional and national water-related work. Though there's a deep well of West Coast concerns, Solar also spends considerable time consulting on water rights and water-related issues with clients and staff of Buchanan Ingersoll Rooney's 17 other offices in seven states.

Recently returning from meetings in Pittsburgh -- a trip fraught with mechanical delays and American Airlines-cancelled flights -- the road-weary Solar never hesitates to travel thousands of miles for the chance to gush over water.

While some might find the work a little dry, Solar has fully submerged himself in the industry. He previously served as a member of the Legal Affairs Committee of the Association of California Water Agencies, and currently serves as general counsel as well as a member of the board of directors of Basin Water Inc., a company that treats contaminated groundwater to meet drinking water standards.

A Chicago native (and still a big Cubs and Bears fan), Solar loaded up his hatchback car upon high school graduation and headed south to Indiana University's Bloomington campus, where he earned a journalism degree.

He moved to the Golden State in 1982 to attend the University of the Pacific McGeorge School of Law in Sacramento. Solar was a co-founder of Alhadeff & Solar LLP, a San Diego and Inland Empire-based commercial law firm that joined forces with Buchanan Ingersoll Rooney in 2007.

"A subtext of real estate development and growth management increasingly became water. The availability of potable water and its uses are a very important component of the land develop mix," he said.

In addition to his early and extensive work with commercial real estate, Solar also represented companies and individuals in the U.S. tuna industry, including Chicken of the Sea International and South Pacific Tuna Corp.

He continues to pursue this line of legal work, and for the past year or so has been working with a group to bring at least 12 vessels under the U.S. flag, which he says would help to rebuild the size of our nation's tuna fleet.

Fish and farms, cities and wildlife -- many major players are vying for parts of the diminishing water supply.

And if ever a slide show on global water woes is made into a blockbuster documentary, Solar -- as San Diego's leading water expert -- might very well find himself with a starring role.