The second annual "alt.pictureshows" at the Museum of Contemporary Art San Diego in La Jolla will feature the best in weird, edgy film shorts.

A Chia Pet, a raw chicken and chronic telephone calls drive a lonely shopaholic to madness.

A New Jersey divorcee joins a group therapy session with Snow White, Cinderella, Red Riding Hood and other fairy-tale characters dealing with what follows "happily ever after."

An animated meditation on the rhythms and cycles of a dogsled journey.

These are just a few of the stories that will be told at the Museum of Contemporary Art San Diego's "alt.pictureshows" on July 22. The museum's second installation of the event features 19 short films by independent filmmakers from the San Diego and Tijuana region, as well as selected works from the 2004 Sundance Film Festival.

As the title suggests, the event showcases alternative films, typically low budget, that tackle unusual subjects and embrace experimentation, or what Neil Kendricks calls the spirit of "let's see what happens."

"These are films that aren't as easy to digest (as mainstream films); they are maybe a little edgier," says "alt.pictureshows" co-curator and local filmmaker Kendricks. "Maybe the themes are more difficult or at times disturbing."

The films will run on a continuous loop in one of four rooms. Biker Chicks, Headcases and Other Discontents features a collection of diverse, offbeat works, while the Stranger Than Fiction room focuses on documentaries about weird subjects. Algebra of Need (a phrase coined by William Burroughs to describe addiction) is a group of "midnight movies" with adult themes, and the music videos of Retinal Jukebox will be projected on the facade of the museum's Oceanview Terrace.

"The idea is that you have these different kind of rooms that have a different mood, a different sensibility," Kendricks said. 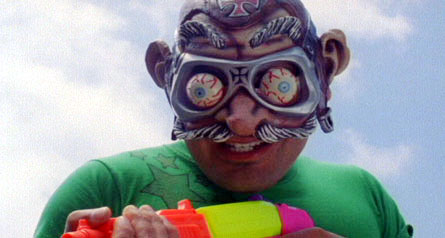 A scene from Giancarlo Ruiz's "Insecto," in which a young woman deals with lust, dysfunctional family life and insects. The film, which won the Best Experimental Film Award at the 2004 San Diego Latino Film Festival, will be part of "alt.pictureshows" at the Museum of Contemporary Art San Diego in La Jolla.

"Alt.pictureshows," he said, is more like an art installation than another film festival -- instead of a call for submissions, filmmakers must be invited to participate. It isn't a competitive event. And, according to Kendricks, it's not a static experience.

Audiences are encouraged to roam from room to room. Kendricks likens the experience to channel surfing.

"But you're channel surfing with your body in this project, in that you have to physically move. You don't have a remote, but you have the choice to move to the next room if something doesn't grab you or you're just curious. And it's a social event," he added. "It's a combination of happening and installation."

One commonality among the films, he said, is the passion that went into their creation.

"You really can't make money off a short film. When a filmmaker is investing whatever funds they have to make a short movie happen, that money most likely isn't going to come back," he explained. Consequently, he said, these are intensely personal films; films that push the envelope and have something to say about the world from each filmmaker's unique perspective.

"We knew we had hit with something that could potentially stand on its own, apart from TNT," he said. "Right now the museum is interested in making this an annual event."

Despite the downtown facility's accessibility to the urban art scene, this year the now stand-alone event has been moved to the museum's La Jolla location. While the La Jolla museum provides more space, it remains to be seen whether audiences will fill it.

"The challenge is, obviously, will we be able to generate the same kind of crowd, or will people make the trek to La Jolla," said Kendricks, adding, "Maybe we bring in a whole new audience that can come and appreciate this work."