If preview night at Comic Con 2004 was any indication, comic book, anime, gaming and sci-fi enthusiasts at the 35th annual event can expect huge crowds, long lines -- and to drop loads of cash.

On Wednesday evening, four-day pass holders and the media were invited to get a sneak peak of the exhibitors that will fill 460,000 square feet of the San Diego Convention Center this weekend. Business was brisk during the preview, as attendees took the opportunity to snap up sure-to-be popular items like Park Sabers Inc.'s very authentically "Star Wars" (but unaffiliated with Lucasfilm) looking "light sabers."

Hundreds of booths will sell everything from comic books to tangentially related items such as costumes, animation software, toys, and any products associated with the big-trilogy films "Lord of the Rings," "Harry Potter" and, of course, "Star Wars."

The popular Lord of the Rings Pavilion returns this year. And with the next installation of the "Star Wars" series to be released in May 2005, Lucasfilm also has a hefty presence in the exhibit hall -- including a life-size X-Wing fighter plane. 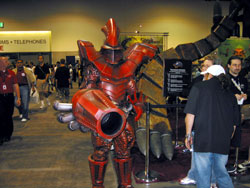 But the convention is more than just a shopper's dream. In addition to the multitude of vendors, the event will host panels, workshops, lectures, a film festival, an awards ceremony and the first-ever Comic Con Film School.

And then there are the celebrities.

Comic Con conventioneers have long awaited the appearance of Sarah Michelle Gellar, star of the immensely popular television show "Buffy the Vampire Slayer." This year they'll finally get their wish, as Gellar is scheduled to discuss her new film, "The Grudge," on Saturday at 4:30 p.m., along with co-star Jason Behr.

Other film stars set to attend are Keanu Reeves and Djimon Hounsou on Friday at 12:30 p.m., promoting their upcoming film "Constantine," based on the comic book "Hellblazer." Jude Law will discuss his "Sky Captain and the World of Tomorrow," at 3 p.m. on Saturday.

Jessica Alba, Jaime King, Rosario Dawson (of the forthcoming "Sin City"), Jessica Biel and Ryan Reynolds ("Blade Trinity"), Eliza Dushku (from the show "Tru Calling") and many others will make appearances, along with producers, directors and writers.

Also not to be missed is the Masquerade costume competition on Saturday night. Heroes, villains, gods, monsters and familiar film characters will compete in this stage show for cash and prizes in categories like Best In Show, Best Re-Creation, Most Humorous, Most Beautiful, Most Imaginative and Best Workmanship. 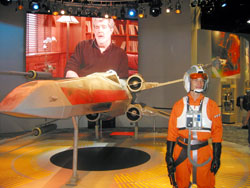 A life-size X-Wing fighter plane is the centerpiece of the Lucasfilm Pavilion. Jennifer Chung/The Daily Transcript

The ever-expanding event takes over yet another exhibit hall at the convention center this year, but the crowds this weekend are sure to be crushing -- and traffic and parking are sure to be difficult. So throw on your Storm Trooper costume and speed downtown on the trolley.