The hallmark of Greek tragedy is a noble character who is brought to ruin, usually as a consequence of a tragic flaw, moral weakness or inability to cope with inauspicious circumstances. Think Oedipus Rex.

Edward Albee's "The Goat or Who Is Sylvia," which opens Friday night at the San Diego Repertory Theatre, is a modern study in Greek tragedy, as suggested by its scholarly subtitle, "Notes Toward a Definition of Tragedy." The word tragedy itself comes from Greek, literally meaning "goat song."

The controversial play, which first opened in 2002, has at its center a man who is having a satisfying sexual relationship -- is in fact in love -- with the titular goat.

There aren't too many taboos left in American theater, but zoophilia may be one of the last frontiers. Like old Oedipus, Martin is a noble character -- he's just won a major architecture award and was chosen to design a multibillion-dollar city of the future. He has a loving wife of 22 years and a good relationship with his gay teenage son. Also like Oedipus, Martin has made a grave sexual transgression. And when Martin's secret is revealed to wife Stevie and son Billy, the fallout is swift and disastrous. 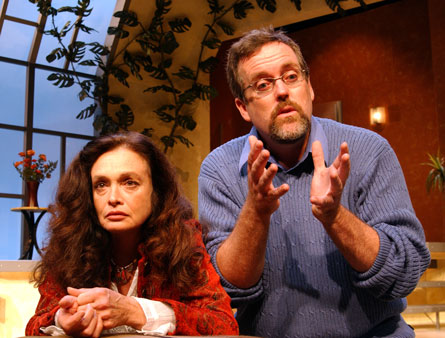 It may sound like a repulsive, if comic, premise for a play. "The Goat" opened on Broadway to mixed reviews, though it went on to garner a number of "best play" awards, including the Tony, New York Drama Critics Circle and Drama Desk.

Albee is known for pairing the unreal with societal issues, as in his acerbic "Who's Afraid of Virginia Woolf?" in which a couple's empty marriage revolves around an imaginary son. But the goat here is real.

"It very much could be a metaphor. But it could be the real thing," said Doug Roberts, not wanting to give too much away. Roberts plays the goat-loving Martin in the Rep staging.

"It's a meditation on tolerance and love and sexuality," he said.

The goat in the play has also been viewed as symbolic of forbidden love. The title forces us to ask just precisely "who is Sylvia," suggesting Albee may have had multiple answers in mind, and theatergoers often point to homosexuality. An examination of reactions against homosexuality may have seemed to Albee too passe in a society where it is now broadly accepted (if not yet sanctioned). But substitute a goat for a gay lover and those visceral, and often hostile, reactions resurface.

When director Sam Woodhouse approached Deborah Van Valkenburgh, who plays Stevie, a year ago about doing the play, she was hesitant.

"I remember being sort of horrified when I read it," she said, "but Sam helped me in finding the 'garish pleasure' in the dark comedy."

Van Valkenburgh said audiences will likely react with a mixture of laughter -- Albee's script is littered with witticisms, word play and farmhouse puns -- and revulsion.

"You're laughing and enjoying everyone's sense of humor and their wit and how strange and radical it is," she said, "and then you're horrified at yourself for enjoying yourself that much."

A big challenge of the intermissionless, 100-minute play is integrating the at times torrential verbiage with the appropriate pace and emotion, said Roberts and Van Valkenburgh, both Rep veterans who shared the stage in the theater's 2001 production of "The Beauty Queen of Leenane." Martin and Stevie, like characters in other Albee plays, are deft and cutting with their language.

The classic Greek tragedy, as Aristotle defined in his "Poetics," evokes pity and fear in its audience. So we are moved to pity Oedipus as a man who doesn't deserve his misfortune, and fear that his tragedy could be our own. Whether Albee's play and the Rep's staging of it are successful as tragedy will depend on whether theatergoers see past the sensationalism of the bestial love making, and are moved by the family drama.

"I think when you get inside people's lives for a few minutes, it forces you to deal with them on a more personal level," said Van Valkenburgh. "So even when you're hearing something that you might think is grotesque, you kind of have to be involved in their emotional life, which then alters how you absorb the act itself."

PROGRAM: "The Goat or Who Is Sylvia," by Edward Albee, directed by Sam Woodhouse