February is Black History Month, created to pay tribute to inspirational blacks from the past and those who continue to make history today. 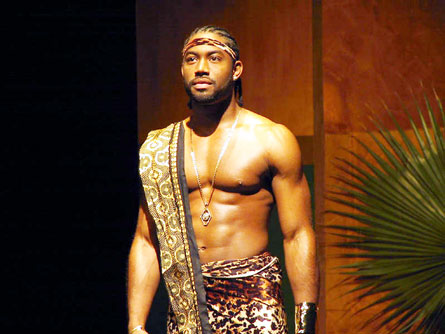 Tychicus Stanislas as part of the Royal Court Processional at Kuumba Fest, one of the many events celebrating Black History Month during February. Photo/Randy Rovang

The celebration dates back to 1926, when Harvard scholar Carter G. Woodson organized the first annual Negro History Week. The son of former slaves, Woodson devoted his life to promoting black education and black history. He chose the second week in February in honor of the birthdays of black supporters Frederick Douglass and Abraham Lincoln.

Fifty years later, in 1976, the week of black history was expanded into a month-long celebration. In San Diego, the festivities include a film festival, various tours around town, an historical exhibit and the 13th annual Kuumba Fest.

The Black Historical Society's "Micheaux Film Festival" continues throughout the month. The festival is named for Oscar Micheaux (1884-1951), a pioneering black filmmaker. Micheaux owned his own film company, and produced and directed more than 40 silent and talkie films that often featured all-black casts.

The film festival will screen Micheaux's 1938 musical drama "Swing," along with his 1934 film "Harlem after Midnight." "Black Vaudeville" is a collection of shorts featuring 1920s entertainers performing the cake walk and Lindy Hop.

Screenings are Saturdays in February, between 4 and 8 p.m. in the Van Gogh Room at the Gaslamp Plaza Suites Hotel, 520 E St., downtown San Diego. The films are free to the public, but donations are accepted. For more information and specific show times, visit www.blackhistoricalsociety.com.

Downtown's Central Library hosts another tribute to the filmmaker with a movie poster art exhibition called "Micheaux! Micheaux! (Race Films Maverick)." The exhibit, which runs through the month, will be on display in the library's street-facing exhibit windows at E Street and Eighth Avenue, and within the library's second-floor exhibit display case. Call the library at (619) 236-5800 for hours of operation.

Two walking tours focus on downtown San Diego's historic black sites and trace the migration of blacks into the area.

The "Harlem of the West" tour takes a look back at San Diego between the 1920s and 1950s, when jazz and blues flowed out onto Market Street. Stops along the 90-minute Gaslamp tour include Nat King Cole's favorite hangout, where Billie Holiday sang the blues and the "Micheaux! Micheaux!" exhibit.

The tour runs every Saturday at 11 a.m. and is free during the month of February. Meet in the lobby of the Gaslamp Plaza Suites Hotel, 15 minutes prior to the start of the tour.

The "Blacks in the Ballpark District" tour follows early black settlements in the area dating back to the 1870s. The tour lasts an hour and 15 minutes and ends with a stop at Petco Park for viewing of the "Blacks in the Ballpark District" exhibit, installed within the Western Metals Building. A cooperative effort between the San Diego Padres, Brian F. Smith & Associates and the Black Historical Society, the exhibit displays artifacts found in areas known to have been settled by blacks.

The Ballpark District tour begins each Saturday at 1 p.m., and its usual ticket price has also been waived during February. Meet in the lobby of the Gaslamp Plaza Suites Hotel 15 minutes prior to the start of the tour.

The celebration kicks off at 6 p.m. Friday, Feb. 25 with an African marketplace and a reception in the Lyceum lobby hosted by the African American Council of San Diego Repertory Theatre and the African American Museum of Fine Art. The event includes an art exhibit along with vendors, live music, fashion and ethnic foods. The Royal Court Processional, featuring African princesses and warriors, will honor role models and positive resources within the community with an awards ceremony. The evening concludes with "Black Like That," a dramatic musical about a family in turmoil struggling to heal and continue the legacy of community.

The festival continues all day Saturday, focusing on positive challenges and showcasing the best talents within the black community. Highlights include "Which Way to Go," a youth play dealing with social and peer pressure; "Deal With It: Hip-Hop, Dance & Step Competition," in which top teams will battle for talent producers and give tribute to the contribution and influence of black dance; a Kultural Extravaganza, featuring a sampling of African American food, fashion and art; and the wild Apollo-style talent competition, "Late Night Live at the Lyceum."

Sunday afternoon features "He Was There All the Time," a thought-provoking drama about the power of choice; and "To Everything There Is a Season," a heartfelt gospel play. The festival concludes with "Gospel Celebration," starring the hottest acts in gospel, among them the Mada Choirs, Adrian Ewing & Steps of Praise, Jmatth, Those Dang Robinsons and Greater Israelite Express Drill Team.

Purchase tickets at the Rep's box office in Horton Plaza, or by calling (619) 544-1000. For complete schedule and pricing breakdown, visit www.sandiegorep.com.