After the bloody, Biblical representation of the crucifixion we got in Mel Gibson's "The Passion of Christ," it's refreshing to see the modern retelling of the story in Lamb's Players Theatre's "Thunder at Dawn," told from the point of view of the three soldiers assigned "nail detail." 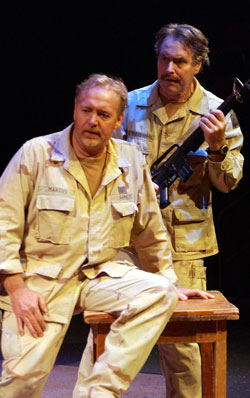 But that doesn't mean this "very different Passion Play" by Max Enscoe is any less brutal -- physically or emotionally. Under direction from Kerry Meads, the 90-minute, intermissionless play has a physicality that has its actors spending nearly as much time on the floor -- shoved and knocked about by one another -- as they do upright. "Thunder at Dawn," while not overtly religious, is a gritty psychological play about guilt, personal responsibility and redemption.

The routine execution of a social radical and gadfly fell to these three soldiers, part of an occupying force in an unnamed Middle Eastern country. But perhaps wasn't so routine after all. Private Domitian (Nick Cordileone), so disturbed by his duties of hammering the spikes into the wrists and feet of "the Nazarene," became physically ill and deserted his post.

The play opens with Sgt. Major Vitruvius (David Cochran Heath) -- a sarcastic, contemptuous and godless man -- delivering a severe tongue lashing to the young private who went AWOL. But soon the commanding officer, Capt. Marcus (Robert Smyth), steps in, and appears to be more forgiving than Vitruvius.

It seems in any play about Jesus there are bound to be father-son issues. Here, Marcus hides a terrible secret about Domitian's father, and believes his redemption may lie in taking up a fatherly role toward Domitian.

Together, the characters spend the next three days in a tavern on base, talking, telling jokes, fighting and trying to drink themselves into "the big numb." Marcus and Vitruvius even have a ritual they perform like a prayer to ward off the post-traumatic stress of executions. But they can't seem to stop debating whether Jesus is indeed the son of God, as some say. Add to their stress the anxiety over what may happen on the third day, when Jesus' followers say he will rise again. Each character vacillates between belief and disbelief, at times balancing on the edge of madness.

Cordileone, Heath and Smyth all deliver visceral, gripping performances in what is more of a taut psychological drama than a Passion Play. Playwright Enscoe seems most interested in how each character mentally deals with what he has done. For Vitruvius it usually means falling back on the Nazi defense of "I was just following orders." But Marcus and Domitian have a hard time shaking their complicity in killing a possible holy man, wavering between haughtiness, skepticism and contrition.

In one poignant scene, Domitian addresses the entombed Jesus as rabbi. He tells Jesus of his father and the scar that runs across his hands as a symbol of integrity and strength. Domitian laments that he has betrayed both his country and Jesus. Just a few scenes later, in the kind of physical, feverish rant that Cordileone does so well, Domitian says he is set on killing Jesus as many times as the specter can resurrect himself.

Still, the characters' extreme wishy-washiness gets frustrating, and at times tends to muddle the plot. Their actions can be read in many different ways in this multilayered play. Since "Thunder at Dawn" is not explicitly religious, their shifting opinions of Jesus could be viewed as a result of fear and guilt, rather than a growing sense of faith.

But for non-Christians, the play seems to miss out on the opportunity to comment on the war in Iraq. The topic is ripe for discussion, particularly with the play's desert fatigues and portrayal of an occupying force installed in a hostile land.

All three characters at least invite the possibility that "the Nazarene" is who his followers say he is. As the play ends, a final pool of light illuminates bread and a bottle of wine left on the table, a hint at the prospect of redemption through the sacrament of Eucharist.