City to take over Gibbs lease

Sixty-eight years after his father founded the airport, Buzz Gibbs is now fighting to keep his business on Montgomery Field (Map It).

The future of Gibbs Flying Service, whose lease expires May 31, is in limbo. But with or without Gibbs, San Diego plans to take over the leasehold.

A standing-room only crowd packed the Casa Machado restaurant Tuesday as the Airport Advisory Committee made a unanimous advisory vote to extend Gibbs' lease for another year. That vote, while garnering thunderous applause, was largely ceremonial because Tracy Means, city airports director, said she had no legal way to extend the lease. 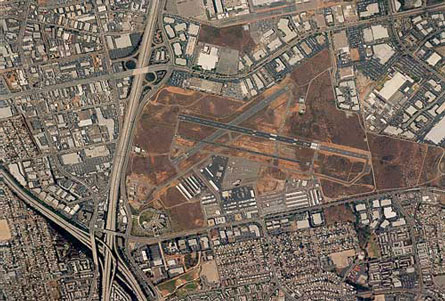 Montgomery Field, originally known as Gibbs Field, opened in 1937 with a single runway. In 1940 Bill Gibbs leased the airport to Ryan School of Aeronautics to train Army Air Corps cadets to fly. The City of San Diego purchased the airport from Gibbs in 1947.

"We couldn't just renew, it wouldn't have been legal," Griffith said. "There were no additional provisions."

While making it clear that the lease wouldn't be extended, Means said the city might be amenable to keeping Gibbs on for a time, at least, in a management capacity. He would have to compete for the right to do that.

Gibbs said after the meeting that while he might be willing to continue on in a management capacity, it would have to make economic sense.

Griffith said he remains confident that some accommodation with Gibbs will be reached. Means said she would like that as well.

"Our intent is to have a smooth transition so as not to disrupt airport operations," Means said. "If Gibbs is unable or unwilling, others have expressed an interest."

Means added that while a new master lease wouldn't be created for Gibbs or anyone else's benefit, the city after May 31 would be negotiating directly with the sublessees.

The expiration of the lease led many in the room to worry. Most concerns shared a common theme.

One concern is what would happen in the interim if Gibbs left abruptly. The fixed-base operator, which caters to everything from small Cessnas to small jets, has a fuel farm that hundreds of pilots have come to depend on. Gibbs Flying Service also has an aircraft maintenance facility, which is included in 120,000 square feet of office and hangar space. The leasehold has 120 hangars and is responsible for about 270 aircraft.

"This is scaring everybody half to death. This is not something you could pick up and move like a shoe store," Gibbs said.

The other issue is if the city does take over, what happens to the existing hangars? While many are relatively new, others have seen better days.

One man said Tuesday that while the hangars might not be pretty, they are affordable.

"This decision seems to be driven by revenue," said Ted O'Donnell, a pilot and certified public accountant. "We may lose some of these airplanes. What then? And what will the impact be on future leases?"