Ronne Froman joined the Navy in 1970 to get away from the old boys clubs of corporate accounting and graduate school. 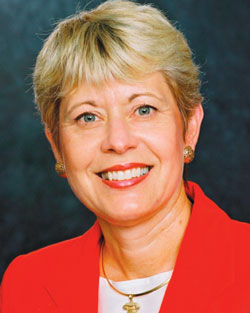 Ronne Froman is "a very savvy" business person, according to those who know her.

After enrolling as the first woman in Cleveland's Case Western Reserve's graduate program in city planning and administration, Froman dropped out because the men in the program were pretty unwelcoming. Then she took a job in Cleveland as a statistical assistant with an accounting firm earning $300 a month compared to the $500 earned monthly by male counterparts. The men were being trained for management consulting while she was being trained for bookkeeping.

"They weren't any smarter than I was," Froman said. By comparison, the Navy offered $500 a month plus room and board.

"That was one reason I joined the military, and people find that surprising," Froman said. "I still believe, now that I'm on the other side, that the military is leaps and bounds ahead of corporate America."

As the service opened up greater responsibilities to women, resistance to their advancement among men increased. Froman recalls feeling the greatest resistance in 1986, when as part of a Navy experiment she was the first woman assigned to the No. 2 position in the executive office at Naval Station Norfolk. She later took command of Naval Base Charleston, a job traditionally assigned to a male submariner, and Naval Base San Diego, a post typically assigned to a male aviator.

"There was no resistance in making admiral. The resistance comes as you start competing for the same jobs as the men," Froman said. "Once you prove that you can do the job, then that resistance goes away."

Froman retired in 2001 having achieved the rank of rear admiral and last served as the Pentagon's head of Navy installations, overseeing a budget of more than $6 billion. Along the way she built a reputation in San Diego as a community leader, serving as San Diego's "Navy mayor" while commander of Naval Region Southwest here and the central point of contact for all local officials in matters related to the military. As commander, Froman led the overhaul of how the command operated, by streamlining the contracts, services and military support each base provided to operating forces.

"She kind of made the mold for how we run this business," said Rear Adm. Jose Betancourt, the current commander of Navy Region Southwest. "In that sense, she had an influence everywhere else in the Navy." Betancourt has known Froman since 1996 when he was captain of the USS Peleliu.

"She's a very savvy businesswoman who, when she was on active duty, had lots of credibility well deserved with the senior leadership of the Navy," Betancourt said.

"She has a confidence about her that is impressive because it is one where it screams leadership and it screams success," said Mitch Mitchell, vice president of the chamber's public policy division. "When you talk to her, failure is really not an option, nor is complacency. No matter where she is, you just get the feeling she has a thought, an idea and a plan."

When Froman took over the local Red Cross in April 2003, the chapter's community relations were so impaired by controversy that volunteers were reluctant to wear Red Cross clothing in public. They couldn't without being asked a lot of questions or being criticized, Froman said.

It's been a difficult haul following scandal over the handling of donations in response to the 2001 Alpine wildfire. The national organization -- itself marred by financial scandal involving the Sept. 11 Liberty Fund -- revoked the local chapter's charter in June 2002 and fired CEO Dodie Rotherham and the entire board of directors after a damaging financial audit showed donations were mishandled.

The fallout resulted in a $400,000 decline in donations in fiscal 2002, investigations by the district attorney's office and an end to a 23-year-old, $9 million transportation contract. At the time, the chapter was struggling with a $3.5 million deficit, depleted reserves and the exhaustion of a $2 million line of credit -- all of which combined to make the chapter unable to pay salaries for the month of July 2003.

Things have changed. Last fall, the local chapter released the findings of an audit by Moss Adams LLP that said the organization is operating in the black again. The chapter raised $7.5 million for fire-related victim recovery services in San Diego and 10 other Southern California counties affected by the October 2003 fires.

"Ronne's done an outstanding job of turning around a very, very troubled organization," said Dianne Jacob, a county board supervisor and an outspoken critic of the organization's previous administration.

Despite renewed confidence, the Red Cross struggles to raise money for its general disaster relief fund, which ensures volunteers are trained and prepared to respond to disasters. But most individual donors reeling from the emotion of a natural or manmade disaster want their money to go toward relief, not overhead.

Although Froman has introduced the accountability and focus the chapter needed to regain the community's trust, the organization will probably always face an uphill battle, Jacob said. "There are people who just have a bad taste in their mouth about the Red Cross -- it goes back to World War II," when veterans felt the organization didn't always have their best interests at heart, Jacob said. "I don't know if Ronne and the board, as good as they are, are ever going to overcome those feelings."

The organization must raise $6 million annually to sustain operations, and earns $2 million toward that goal through its various courses and products. The remainder must come from donations.

"People give to disasters, but they don't realize that in order for us to be able to respond to a disaster we have to have a ready force," Froman said. "They don't want to pay for salaries and operating expenses, but if I don't have the money to operate and train, and buy equipment and pay for my people, then we can't be ready."

After a recent marketing campaign failed to attract interest from individual donors, Froman has reset her sights on corporate San Diego, hoping to exchange donations for employee training in disaster relief. If it works, large segments of the community working for some of the county's biggest employers could serve as a cadre of disaster relief minutemen.

Meanwhile, Froman has restructured the chapter to do away with redundant positions, resulting in the layoffs of about 20 workers. "These are the same people who had helped fight the fire that I had to lay off," Froman said. "It was a difficult time, but it did save about $800,000."

The remaining staff of 80 and volunteers will move into a $6.8 million, 35,000-square-foot office building in Kearny Mesa this summer, paid for by the sale of real estate, including its existing headquarters near Hillcrest for $10.5 million. The sale will also pay for $1.1 million owed on the chapter's Ruffin Road facility, eliminate the chapter's debt and boost its reserves to around $5 million.

Froman is now focused on the challenge of raising $4 million annually and creating a $30 million endowment to ensure the chapter is always ready to respond to community needs.