As chief executive officer of the nonprofit Sharp Metropolitan Medical Campus, Dan Gross has a unique perspective. He used to be a clinical nurse in the intensive care unit at the campus' flagship Kearny Mesa hospital, Sharp Memorial. 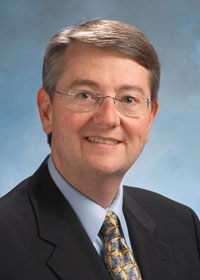 That was nearly 26 years ago. Since then, Gross has been evolving as a health care leader in San Diego, rising through nursing management and education to become Sharp's director of patient care services, regional director of clinical care and patient care services, system vice president of clinical services and, since 1996, CEO. Along the way, the relocated Kansan earned a master's in nursing administration from San Diego State University and a doctorate from the University of San Diego. Gross has taken leadership roles in numerous health care associations, including board chairman of both the Healthcare Association of San Diego and Imperial Counties and the San Diego chapter of the American Heart Association.

"I never had a career path to become a CEO," said Gross, who credits his rise in large part to the support of the "Sharp family" and Michael Murphy, president and CEO of Sharp Healthcare. Gross said there are an increasing number of former nurses assuming senior leadership roles across modern health care. In fact, he believes nurses are becoming CEOs more frequently than doctors.

Gross said his own experience has helped him create bonds through a cross section of all departments and divisions of health care.

"The ability to create those relationships -- not all CEOs have," Gross said.

Gross commands these facilities at an interesting time in American health care, while skyrocketing costs, millions of uninsured patients and unfunded regulatory mandates make it difficult for hospitals to make ends meet.

If these margins seem low, consider that 36 percent of the nation's 4,895 community hospitals operate in the red, according to the American Hospital Association. In California, the figure is closer to 50 percent, according to Gross. And, Sharp Metropolitan's operating margin is actually higher than the national average of 3.3 percent. Sharp Healthcare's overall debt at the fiscal year ending Sept. 30, 2004, was $393 million, which includes $240.54 million at Sharp Metropolitan.

Gross said California has one of the lowest Medicare reimbursement rates in the country. Add to that challenge, requirements for improved building earthquake resistance, information systems such as computerized physician order entry, controversial staffing ratios and enhanced patient data privacy.

The April issue of Consumers Digest ranks Sharp Memorial among the safest hospitals in the nation, while Sharp Healthcare has been ranked one of the top 100 most wired hospital systems by Hospitals & Health Networks, the journal of the American Hospital Association.

They are rankings Gross takes considerable pride in, even as he celebrates Memorial's Golden anniversary and oversees the financing and construction of a new $160 million Sharp Memorial hospital that will offer 315,000 square feet of new space. The original, which cost just $4.5 million, opened in 1955 and will be used for support staff and outpatient care.

Sharp is paying the bill with a mixture of philanthropy, operating income and debt financing. Most of a $50 million fund-raising campaign will go toward the new building as well as toward information technology and to meet needs at Sharp's hospital in Chula Vista. Gross said $27 million has already been raised and Sharp hopes to raise another $1 million at its 50th anniversary gala May 7 at the Manchester Hyatt.

But even more funding will be needed to fully complete the new hospital, which is being built through "shelling" -- a construction method that involves building the basic framework for the complete hospital while leaving room to add floors. The new hospital will open in late summer 2007 with three floors, and the hospital plans to add three and a half once more money is raised. Gross estimates that each floor costs about $10 million.

Meanwhile, the hospital is moving forward with the rollout of its first computerized physician ordering system. The technology places computer terminals at patients' bedsides and nursing stations so doctors can easily type in treatment and test orders and see alerts about potential hazards of a certain course. The system is expected to dramatically increase patient safety by eliminating the need to interpret a doctor's handwriting. A 1999 Institute of Medicine report found that up to 98,000 deaths in U.S. hospitals result from medical error, and more recent studies say tens of thousands of deaths are caused by errors at nursing homes and clinics.

Gross said the health care industry's focus on information technology is part of a broader movement to better track patient care data and self-report quality indicators at a time when health care plans and consumers are demanding more information. For example, Sharp Memorial can track the progress of all its diabetic patients to determine how well treatments are controlling blood sugar. That's because a patient whose blood sugar is properly controlled is less likely to have a "morbid event."

"Most CEOs realize that the best way to improve a hospital is through data," Gross said. "If you want to stimulate change, you have to have quality data."

As hospital executive confronting the complexities of American health care, Gross hopes to stimulate change at an even more profound level: shifting the focus of public debate toward medical access for the uninsured. The millions of Americans lacking health insurance and access to care cause high premiums across the system, not the other way around, according to Gross. He notes that hospitals like his own must shift the cost of caring for uninsured patients to those who are insured.

"One of our biggest imperatives is to help articulate that indeed there is a health care crisis looming," Gross said. He believes the solution must be found through public-private partnerships somewhere in the middle of universal health care paid for by taxpayers, and increased burdens on providers and employers.

To that end, Gross said, the government, employers and care providers must answer a question: "How do we all come together to create a viable solution, knowing that there will be an impact on everyone?"