By Jennifer Chung, The Daily Transcript
Thursday, May 12, 2005

On Wednesday night, a diverse crowd of about 50 people were listening to Alfred Howard and the K23 Orchestra, a Latin-flavored jazz-fusion rock band with touches of hip hop and spoken word. Some were sitting in chairs, bobbing their heads to the infectious beats. Many were on their feet dancing. Others were sipping wine, chatting with friends. 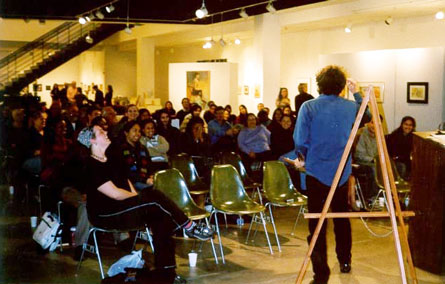 A poet performs in the San Diego Art Institute at a past Poetry and Art event.

The unusual thing about this scene was that it didn't happen in a club, bar or coffeehouse. It took place amid the artwork and clean black and white contours of the San Diego Art Institute in Balboa Park. The event was the latest installment of "Poetry and Art," which melds spoken word with visual art and music.

"You spend so much time in a museum walking quietly, or sitting admiring a painting -- in your own head with your own thoughts -- and then you take your conversations outside or whisper your conversations," said Poetry and Art host Michael Klam. "It's an interesting thing to be in a museum and have it full of sound, music and poetry, and even just loud conversation, where people are partying."

The quarterly program includes live music, featured poets, an open mic segment and the visual art housed within the museum. The idea behind Poetry and Art is to provide an opportunity for people to express themselves in a variety of artistic forms and styles. Many of the featured poets are also accomplished visual artists, and a poet might read a piece inspired by a painting or photograph, which will be on display for the reading. Saxophonist Shannon Bates is also on hand to accompany the poets.

In addition to Alfred Howard and the K23 Orchestra, Wednesday night's event included guitarist Israel Maldonado, a sort of one-man Latin jazz band. Maldonado sampled himself playing guitar and a variety of percussive instruments until he had the full sound of an entire band.

San Diego poet Elena Velasquez gave a fiery reading of new and old works tackling subjects like family, and what it means to be Chicano, a woman, and an American.

Photography by Maria Teresa Fernandez, who has spent a decade documenting the San Diego/Tijuana border fence, was also on display. And a dozen newbies and established poets alike got up during the open mic segments to perform their works, often in dialogue with a piece of visual art.

"We're really trying to give people a place to meet other living artists who would collaborate, and who would in some way inform, influence or inspire each other's artwork," he said.

During Maldonado's set, for example, a saxophonist joined the guitarist on stage for an impromptu jam. This type of collaborative serendipity is what makes the San Diego Art Institute, also called the Museum of the Living Artist, such a fitting place for the event.

The 10,000-square-foot museum at Balboa Park has a three-pronged approach of exhibition, education and outreach. The Poetry and Art series, said SDAI Executive Director Timothy Field, contains each of these components.

"Our focus is the living artist. It's what's being produced, what's being done now. How does it affect our community today?" Field said. "With the written word, the visual art, the music, you're really getting a snapshot of what's going on in the community. It's a point in history. If you listen to the poetry, you can see the anger, or you see the angst, or you see the emotion, the relative aspects of where the human condition is."

If you think of museums as alienating and antiseptic spaces, Poetry and Art just might be the thing that changes your perspective. During the course of the event, Klam encourages attendees to stroll around, check out the museum's art exhibit and talk to performers.

"When you have a museum scene where you have the appreciation of dead artists -- which is important, and the study of that is important -- but it's kind of sedate," Klam said. "When you're celebrating living artists, it's just that -- it comes alive. And people tend to want to get loud and talk to each other and have a good time."

The next Poetry and Art event will take place Aug. 17. SDAI members get in free, and there is a $3 suggested donation for all others.