In playwright Kenneth Lonergan's "Lobby Hero," when a chatty graveyard shift security guard is told by a female cop that she likes him, he finds himself dumbstruck with schoolboy befuddlement. "I was going to say ..." he repeats, flustered and embarrassed. But the words never come.

The pauses are pregnant while actor Nick Cordelione stares off as if the words would magically materialize over the policewoman's left shoulder. He looks as though he's flubbed his lines, and it's an uncomfortable moment for the audience. 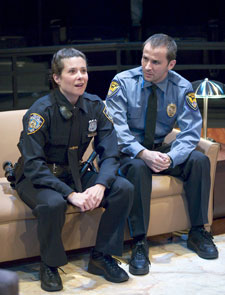 It's this kind of realism in dialogue that Lonergan is known for penning. His characters cut each other off, stumble and pause, compete for attention, speak in clips and phrases. This sort of thing can get messy in less capable hands, but director Kirsten Brandt (former artistic director at Sledgehammer Theatre) has assembled a talented four-member cast for the Globe production of Lonergan's play of moral dilemmas.

The whole play takes place in the lobby of a Manhattan apartment building, where Jeff is the night watchman. He's a likeable if foundering fellow who fights to stay awake during his usually uneventful shift. Cordelione offers an outstanding and natural performance as the charming yet insecure, inquisitive jokester.

His black boss is the youngest captain in the security firm's history, a stickler for the rules who has a strong sense of integrity and a sensitive side. But when his brother gets tied to a murder investigation, William is faced with the decision to let his brother take chances with an often unfair penal system, or to lie and save him. In working the issue out -- and deciding to lie -- William confides in Cordelione's character, setting up the dilemma for the titular "hero." Does he tell the truth or keep his friend's secret?

But things aren't as straightforward as telling the truth or not. Lonergan's many-layered drama deals with issues of motivation, self-preservation and duty. The moral quandary is in deciding which is more important -- duty to the truth, law and responsibility, or duty to family, friends and coworkers.

J. August Richards deftly portrays William's turmoil between his code of ethics and his sense of filial duty. Richards and Cordelione play off each other with natural amity, and during their exchanges you get completely sucked into the play and their predicaments.

Less successful are the interactions between the cop on the beat and his new rookie partner. Bill is a macho, self-righteous jerk with a penchant for morally reprehensible behavior. Dawn is an impressionable newbie who's taken by her partner's authority and confidence. Mark Espinoza and Lauren Lovett add fire to their roles, but they get bogged down in their stereotyped NooYawk cop characters. Lovett bounces around the stage in a weird rendition of put-on "I'm a woman in a man's world" posturing that doesn't quite work.

But these are minor flaws in an otherwise engrossing and funny play. "Lobby Hero" depicts a vivid slice of modern life, and director Brandt and this fine ensemble give it an energetic turn, with Nick Fouch's appropriately sterile, faux-marble scenic design. Lonergan's play about personal responsibility and ethics is a timely production -- especially considering the recent scandals that have rocked corporate and city governance -- that provides a lot of meat to chew on long after the laughter has subsided.

Show times: Sundays, Tuesdays and Wednesdays at 7 p.m.; Thursdays through Saturdays at 8 p.m.; Saturday and Sunday matinees at 2 p.m.