Summer's heating up, but the Old Globe's Shakespeare Festival got off to a lukewarm start this week with the opening of "The Comedy of Errors." 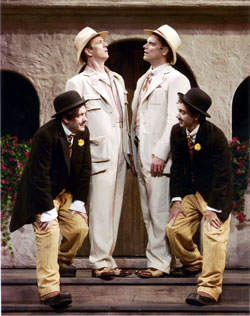 The classic Shakespearean comedy is faithfully rendered here by Director Darko Tresnjak, with loads of slapstick, buffoonery and cartoon-like sound effects. It's entertaining, it just isn't as funny as it should be. The actors -- while mostly delivering crisp lines and heroic performances of kinetic energy -- seem to be trying too hard.

Two sets of identical twins -- two gentlemen and their servants -- are separated from their other halves at birth. Years later the two pairs end up in the same city, and a number of "errors" ensue, based on improbable coincidences and mistaken identities.

These unlikely plot twists make up much of the humor in "Comedy of Errors," but the focus in the Globe production is on the schtick, and it didn't quite hit the mark for me. There are pratfalls, animated pursuits and Stooge-like drubbings, along with fat jokes and bawdy humor involving the kitchen wench. If eye poking, frying pans to the head and fish whacking are your idea of humor, this might be the show for you.

The two servant brothers, played by Liam Craig and Evan Zes, have the Chaplin waddle, along with the small derby and the large shoes, the baggy trousers and the tight jacket. Their performances are breathless and skillful, and some of the bits are truly hilarious, like the ventriloquist gag with Zes as oversized dummy on J. Paul Boehmer's lap. But other times they seem to have less natural clownish fun than a sort of forced persistence, like when a child performs antics to get the attention of the adults.

Better are the scenes between one gentleman and his priggish, presumptive sister-in-law. The sparks -- and humor -- fly when real-life husband and wife Bruce Turk and Katie MacNichol are together. Another standout segment is a psychedelic love-fest voodoo trip as a hypnotist (Wynn Harmon) performs an exorcism on one master-servant pair and ends up mesmerizing the whole town.

Charles Janasz is sincere and pathetically funny as the father who lost a wife and son at sea, and Deirdre Lovejoy is fiery as the spurned wife. Kandis Chappell plays the Lady Abbess with authority, and Brian Bielawski deserves a mention as the executioner for doing the most with a nonspeaking role.

The Globe's "Comedy of Errors" is generally an enjoyable evening of chuckles and Shakespeare under the stars. Just don't forget to bring that blanket, because you can't expect side-splitting laughter to keep you warm.

PROGRAM: "The Comedy of Errors," by William Shakespeare, directed by Darko Tresnjak