SDCERS' president finds himself in middle of pension dogfight

Another indication that the political world of San Diego is upside down is that a volunteer pension consultant from La Mesa is at the center of one of the most heated battles in the city's recent history.

Today, Preovolos, who's been president of the board for one month, was named a defendant in a lawsuit, and two City Council members are now calling for him to be fired. 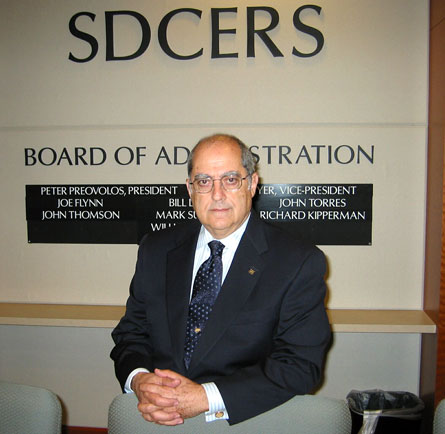 "It's been a long couple of months," the 66-year-old said in an interview.

He has a long history of overseeing retirement plans in the private banking sector; in 1966 he started managing trust operations for Wells Fargo's (NYSE: WFC) Southern California banks.

In 1974, Preovolos was offered a job to lead the pension administration department for Southern California First National Bank.

"When I joined that department there were three employees; when I left there were 20," Preovolos said.

He kept that position until 1979, when he left to collaborate with banking associates to establish Alpha & Omega Financial Management Consultants, a La Mesa-based retirement adviser.

Preovolos proudly states that he is president of two companies: Alpha & Omega, and PenChecks, a benefit distribution processing organization.

He said work, his family in La Mesa and his heavy involvement with his church were enough to keep his hands full.

Meier Wright asked if he'd be interested in performing a volunteer service for his neighboring city by becoming a retirement board trustee.

At the time, then-Mayor Dick Murphy had been searching for "business leaders" to sit on the retirement board of the city's beleaguered pension system, which was undergoing a new configuration as a result of a recent ballot initiative in the city.

The board make-up was changing to 13 members, which includes seven independent trustees appointed by the mayor; the remaining six seats represent municipal unions and the city manager.

After Meier Wright's call, a mayoral staffer phoned Preovolos to verify his willingness to serve.

He said he actually had to request to be interviewed by Murphy for the job.

"I said, 'I'd be willing to talk, but don't you think (Murphy) should interview me?'" Preovolos said.

Murphy called a couple of days later for a five-minute conversation, Preovolos said.

In a few short weeks, Preovolos was a trustee of a system that is facing a $1.37 billion deficit and is a flashpoint of conflict at City Hall.

The hot issue is the waiver of the attorney client privilege by the board of the retirement system.

At that time of Preovolos' appointment, City Attorney Michael Aguirre and Murphy had requested the waiver.

In the following weeks, requests for the privileged documents were issued by the city's outside auditor, KPMG, the city's audit committee, the City Council and U.S. Attorney Carol Lam.

Still, the board has not waived the privilege to allow those documents to be released.

Preovolos considers himself to be a man of principle and preaches the importance of discipline.

Sitting in an SDCERS conference room wearing a blue suit with quarter-sized golden cufflinks and a pin in his lapel reading "Try God," Preovolos said he opposes handing over the documents for two primary reasons.

First, releasing the documents could establish a precedent of which every future board could feel insecure about conducting business with its attorneys.

"Will the door now be open so that no future board will ever be able to carry out its business without people raiding the records at will?" Preovolos asked. "I don't want to be the guy that sets that precedent for future boards."

Second, Preovolos said the retirement system -- as an institution -- committed no crimes and should not have to compromise its security by giving up documents.

Compromise is an issue that interests Preovolos.

"I am also a fond believer that in compromise there are no winners, only losers," he said. "This boy ain't compromising because I know what we're doing is right, and I know that we've never done anything wrong as an organization."

When asked if he opposes docketing the waiver for future board meetings, he said the other trustees can vote to have it added.

"If board members want to talk about a waiver, if they feel that is critical, let them take a vote," Preovolos said. "It could be on the agenda at every meeting."

"He has been given every opportunity to perform his duties and he has failed," Frye told reporters Friday in front of City Hall.

Atkins complied with the request, docketing the item for Tuesday's City Council meeting, and noted that a board member can be removed only if cause is shown.

"I think you can only remove a board member for cause," Atkins said. "The city attorney will have to present a case, and the council will have to vote based on what they hear."

Councilman Jim Madaffer also told reporters on Friday that board members who do not agree to waive attorney client privilege should resign.

Preovolos said these actions illustrate that city leaders fail to understand that the fiduciary responsibility of the board members belongs to the retirees, not to the city or City Council.

"The fact of the matter is that I have no obligation to the city," he said. "The only responsibility I have is to the retirees and manage the system in accordance with the laws today."

When asked if would resign from the president's position, Preovolos said, "If Donna Frye and Michael Aguirre resign, I will resign and the three of use will walk down the yellow brick road together arm and arm."

An improvement in the relationship between the council and Preovolos is not out of reach, he added.

"I really would wish that all of the players could take three steps back and look at ourselves as human beings, come back to a table of reasonableness, and say the most important thing is regain the respectability as a city," Preovolos said. "We have embarrassed ourselves enough."