In October 2003, Scripps Ranch, a victim of the San Diego County Cedar fires, was engulfed in flames. Merely two years later, more than 60 percent of the 312 homes that were destroyed have been reconstructed, and since Aug. 31 the city has issued 298 permits to rebuild, according to City Councilman Brian Maienschein, whose district includes Scripps. 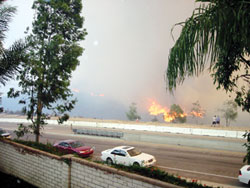 Fire laps at a road during the Oct. 2003 firestorms.

"I'm so elated with how the process has gone," Maienschein said, adding that the community is largely to credit. "If you compare this process to that of Oakland Hills and Laguna, it took Oakland nine years to get to this point and Laguna four and a half. This has been an overwhelming success."

But because so many homes need to be rebuilt, the process has encountered many hurdles.

According to Bob Ilko, chair of the Scripps Planning Group, some residents in the area believed it would be a good move to bring in a mass producer of homes. Stonefield Development Co., which represents the largest mass producer in the Scripps rebuilding process, was selected and has completed 81 homes. Stonefield, however, was not the first choice.

The process began when an unnamed homebuilder sprung a building concept on the residents, under the guise of an information meeting.

"It looked like a well-hatched, complex plan that came too quickly," Ilko said. "It seemed like they (the homebuilder representatives) were saying 'turn over the ownership of your home and we'll make it work'...so the people said 'no.'"

As a result, the members of Project Phoenix, a Scripps Ranch Community Association committee to help fire survivors also chaired by Ilko, approached other large developers that had expressed a willingness to help the members of the community interested in mass production.

But this time it was the homebuilders who rejected the offer, indicating that the rebuilding project couldn't fit into their business model. This came after homebuilders were attempting to sign residents up for homes.

"The question was 'what do we do now?'" Ilko said. That's when Stonefield stepped in with a proposal, eventually agreeing to build 81 homes in the Whispering Ridge neighborhood.

According to Stonefield, the first move-ins took place in late March 2004, with an average of seven homes per week delivered after that. The company designed seven floor plans and four architectural elevations, and it offered pricing between $93 and $98 per square foot and two- through 10-year home warranty plans.

"To their credit they got nationwide awards for undertaking the project," Ilko said, with one award coming from the San Diego chapter of the Building Industry Association.

Another homebuilder, Hallmark Communities, has completed nine homes in Scripps, with two more nearing completion, said Ken Henry, project manager. Hallmark offered 25 different home plans to residents, which ranged in area of 2,000 to 3,500 square feet at $95 to $102 per square foot.

"The building process was trying, but at the end I would say 100 percent of the people were happy with the product," Henry said.

Other homebuilders that constructed or are currently in the process of erecting homes in Scripps include: Gaitaud Construction; New Horizon Builders, which recently was sued over the incompletion of one or two homes; and D.E. Anderson Construction, which picked up 30 to 40 homes, Henry said. There were also a few residents who considered hiring an unlicensed contractor.

With the mix of homebuilders working within same area, homebuilders had to join forces to minimize the impact their labor would have on schools and traffic. They set up a transportation route during the demolition portion of the process.

Homebuilders were also thrown a curve when working with homeowners. Normally the home is built first and then homebuyers are solicited. But in this situation the homeowners were already in place and waiting for the completion of their residences.

"The homeowners threw in a different dimension," Henry said. "It became like building a custom home because you're being scrutinized daily."

A homeowner who is too involved in the day-to-day construction of a home could hinder the rebuilding process.

"I agree with some philosophies to keep the homeowner updated, but too involved means the costs start going up," Ilko said.

Homebuilders also had to take into account new building requirements, such as the ban on wood shake or wood shingle roofs. Also effective on any building permit issued on or after March 1, 2004, was a requirement that all newly constructed roofs be Class "A" roofing assembly, which signifies the most fire-resistant roofing. After the fires, however, a neighbor of Ilko's discovered that roof type didn't matter.

"Every type burned down regardless of roofs," Ilko said, adding that his neighbor found the No.1 house that burned was wood shake, and that concrete tile roofs were the best.

"I believe that to be absolutely true," he said.

Outside of the actual rebuilding process, residents experienced trying times with their insurance companies. A survey done by an insurance industry contractor cited that 80 percent of homeowners are uninsured by nearly a third.

"When we started collecting data from the 312 homes, we found the same percentages," Ilko said. "Insurance companies said using their insurance programs they found the cost was still more than the coverage."

But he said the insurance companies were not correctly using their program, which determines costs.

"It's a systematic issue. ... It's not the agents or brokers at fault. You need to train them how to use the program," he said, adding that someone whose home was burned in the Oakland Hills fire came down, plugged in more specific information into the program, and generated a number that was half the cost.

Although some insurance companies cut off ALE after 12 or 24 months, others did after a certain dollar amount has been reached. Select insurance companies also required homeowners to create a list of everything in the home combined with the dollar value of each item.

"Close your eyes and tell me everything in your bathroom," Ilko said. "They had people going on these huge scavenger hunts."

But over time companies tended to back off their demands.

As a result of these insurance problems, residents of Scripps went to Sacramento and got a homeowner's bill of rights assigned, which lays down the rights of homeowners and protects them against further situations.

Also passed by the California Senate in early September 2005 was bill SB 2, which states: No personal property inventory would be required for a homeowner when the home is a total loss; policy limits for personal property would be paid if a total loss is declared; in cases of a "state of emergency," additional living expenses must be extended to 24 months; and any computer software used in determining policy coverage must be approved by the Insurance Commissioner. This bill does not go into effect until the beginning of next year.

The insurance issues and rebuilding have contributed to a two-sided reaction to the new homes.

"Some like the new elements, but you're also asking someone to forget what happened," Ilko said. In total he said about 10 percent of people whose homes burned decided not to return to Scripps.

"Being at 90 percent (return rate), it hugely impresses me," he said. "No one died in Scripps (as a result of the fires). I'll take that over everything else."