Two years after a firestorm that burned homes from Ramona to Scripps Ranch and Tierrasanta to Alpine, Supervisor Dianne Jacob said the county and the Local Agency Formation Commission have moved closer toward the creation of a district that would merge 35 backcountry fire agencies into one.

Jacob, who notes that there are still another 30 fire agencies in the county in or close to metropolitan areas, said it is essential to have one source of command and control if fire response is to be effective.

While emergency responders mounted a heroic effort, much didn't work well on Oct. 25, 2003, and in the days that followed.

A fire helicopter that could have dampened the flames when they were still of manageable size had to retreat because of impending darkness. Potential military responders turned around because they couldn't coordinate their efforts with civilian aircraft, and an inadequate warning system doomed residents in their homes.

The Cedar Fire started south of Ramona on Oct. 25, 2003, and moved into Lakeside, where it killed 13 people. Only 16 1/2 hours later, the raging monster that would become the largest wildfire in the history of the state had pushed more than 30 miles to the southwest and already had destroyed 100,000 acres. 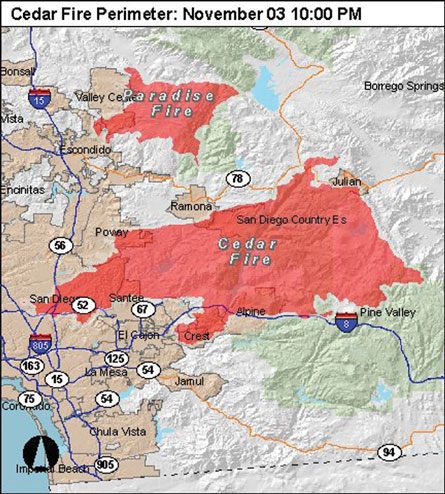 Hundreds of homes in the Scripps Ranch area burned down despite the fact that most had tile roofs. While the roofs were safe, the eves could still catch fire. And even if the eves were protected, the wind-driven flames fueled by eucalyptus and other flammables were driven with such force, the windows blew in and the homes were consumed from the inside out.

The impact of the Cedar Fire stretched well beyond the county's boundaries. When the Federal Aviation Administration's Terminal Radar Approach Control facility in the Miramar area had to be evacuated, air traffic from San Diego County to the Los Angeles basin was diverted.

Another finger of this fire extended far enough southeast to take out hundreds of more homes in Alpine, Harbison Canyon and Crest.

By the time the fire was contained over the next week, it had burned 280,278 acres, consumed 2,820 buildings (including 2,232 homes) and killed 14 people, including a Novato fireman.

Although Jacob said that while the county is in much better shape to respond today than it was during the Cedar Fire, changes aren't being implemented as fast as she would like.

The county now has two locally owned and operated helicopters at its disposal around the clock.

With $40 million of its own money and $5 million from the federal government, the county has managed to remove about 200,000 dead pine trees that were killed by the bark beetle following several years of drought in the county. The problem is there may be as many as a million more out there.

New county ordinances also give fire officials the final say in brush clearing. In short, protecting life and limb will take precedent over other considerations such as habitat preservation.

As far as the homes themselves, Jacob said stucco-boxed eves and fire-resistant skylight frames may go a long way toward protecting new homes.

Michael Pattinson, president of Carlsbad-based homebuilder Barratt American, said though more stucco on the eves and skylight improvements will help, it is the brush clearing that will make the big difference.

Communication problems were blamed for a sluggish response in October 2003. Jacob said even though $20.5 million has been spent on an 800 megahertz system to ensure that local emergency responders can talk to each other, other state and federal civil defense agencies are still operating on other frequencies.

"Our system will be done by January, but it still doesn't solve the problem with other agencies," Jacob said.

Jacob said a new reverse 9-11 system, in which residents are called to get out of their homes, will also go a long way toward alerting and saving residents, assuming the telephone lines haven't been lost in the fire.

In the meantime, tribal funds have resulted in new fire engines for the Barona, Viejas and Sycuan bands. These engines will serve the reservations and beyond if needed.

Though it would seem that the county is much better protected, Pattinson and Jacob conceded that while the danger of fire can be reduced, it can never be eliminated.

"The good news," said Pattinson, "is there is a lot more consciousness out there."