Although the Cedar Fire started northeast of Scripps Ranch, it roared in on the upscale suburban San Diego community from the southeast.

One of the first neighborhoods hit was a 76-home appendix at the southeast corner of Scripps on Walnutdale and Pinecastle streets and Meadowdale Lane. Just 16.5 hours after it started in Ramona, the wildfire was burning 312 homes in Scripps Ranch on Oct. 26, 2003, and was well on its way to being the second-largest wildfire in California history.

By the time the wildfire was finished with the Walnutdale-Pinecastle-Meadowdale neighborhood, 72 homes had been destroyed. For some reason, four seemingly random homes did not burn. 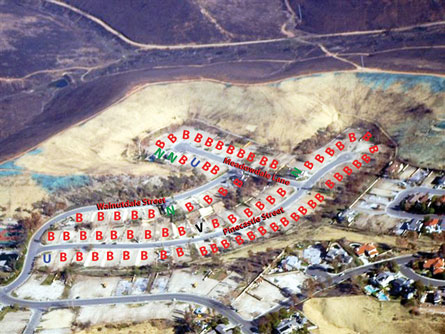 Less than two years after the devastating wildfire, 69 of the homes destroyed have been built and two others are under construction. Only one empty lot remains.

The previous second-largest wildfire in California history was the Laguna Fire, also in San Diego County. From Sept. 26 to Oct. 3, 1970, The Laguna Fire burned 175,425 acres, killed eight people and destroyed 382 homes. In 24 hours the fire burned from near Mount Laguna into the outskirts of El Cajon and Spring Valley.

Another notable urban wildfire in San Diego was the Normal Heights fire in June 1985 that destroyed or damaged 116 houses, causing $8.6 million in damage.

Another devastating urban wildfire was the Oakland Hills Firestorm on Oct. 20, 1991. The fire killed 25 people, injured 150, destroyed 2,449 single-family dwellings and 437 apartment and condominium units. The economic loss has been estimated at $1.5 billion.

The largest wildfire in California occurred in the 1800s when large-scale firefighting was unavailable.