Floristry may just be the world's second oldest profession -- ancient Egyptians produced refined floral arrangements, while the ancient Greeks and Romans incorporated flowers and plants in all of their celebrations.

Floral arrangement has always been closely aligned with art, and nowhere is that more apparent than at Art Alive, the annual springtime festival of art and flowers at the San Diego Museum of Art.

The "floral extravaganza," as the museum calls it, is now in its 25th year, and is one of the longest-running events of its kind in the country. New events include a special after-hours viewing cocktail party and a floral demonstration by Christian Tortu. The exhibition is open to the public April 28-30, with a members-only preview on April 27. 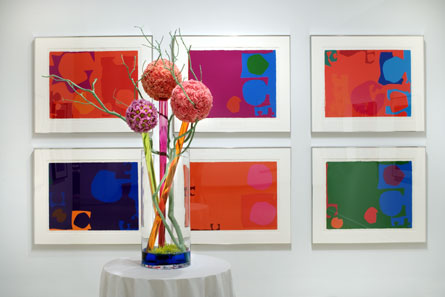 The exhibition features floral interpretations of artworks created by more than 100 professional and award-winning amateur designers from floral clubs, schools and vendors. The rotunda display will showcase contemporary designs by San Diego's Green Florals. The Green designers will re-create the glamorous, decorative look of mid-century Hollywood Regency Design through modern arrangements in a variety of spring colors.

This year's floral demonstration and lecture, "From Nature to Art," will be presented by Parisian designer Christian Tortu, known as "the Yves Saint Laurent of flowers." He's known for bold, unique creations that pay homage to nature in its original form, mixing wildness and originality with humor and nostalgia.

Tortu's celebrity clientele includes Catherine Deneuve, Princess Caroline and fashion giants Dior and Chanel. He has created floral displays for the Cannes Film Festival, and has also launched his own line of flower-related and aromatherapy products. Tortu is the author of the book "Sensational Bouquets."

The demonstration and lecture is scheduled for Friday, Feb. 28 at 10 a.m. in the museum's James S. Copley Auditorium. Tickets are $40 for members and $50 for nonmembers.

Later that evening, the museum features a special after-hours viewing called Flower After Hours, modeled after its popular Tower After Hours social for the 21-and-up crowd. The event features a no-host bar, music and a chance to view the arrangements in the galleries from 6 to 9 p.m.

The exclusive Art Alive Gala on Saturday, April 29 is one of the highlights of the weekend. The festival kicks off with a champagne celebration at 6 p.m. for VIP guests (limited tickets available for $500), with cuisine by the renowned Chef Bernard Guillas of the Marine Room.

The gala begins at 7:30 p.m. and includes gourmet fare and wine selections from a dozen of San Diego's top restaurants, including The Prado, Laurel, Trattoria Acqua and more. Crooner David Patrone provides the swinging entertainment. Tickets are $225.

The late-night portion of the gala, called Late Bloomers, begins at 9:30 p.m. and goes until midnight. This over-the-top homage to spring culminates with a chic menu of sweets and artisan cheeses, music from DJ Damon Bell and cocktails from the Pravda Vodka bar. Tickets for Late Bloomers are $75.