Though the tickets were sold out long ago, if you count yourself among the lucky and scored a seat to "Wicked," you won't be disappointed. 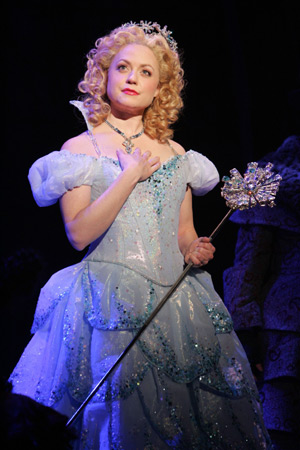 The national touring production of the runaway Broadway hit has the panache and emotional punch worthy of all the hype, plus a few political statements to make as well. It's the uncommon musical that has both substance and style.

Winnie Holzman's book is based on Gregory Maguire's novel, which is in turn a sort of prequel to Frank L. Baum's "The Wonderful Wizard of Oz." Three degrees of separation later, the musical successfully uses our familiarity with the characters of Oz to create witty humor with a wink, dazzling images and some provocative ideas under Joe Mantello's direction. There are even explanations for the Tin Man, Cowardly Lion and Scarecrow, and the presence of an unseen Dorothy.

The enchantment begins with Eugene Lee's amazing clock-themed set, complete with churning gears and ticking hands. A huge and impressive dragon overlooks the proceedings in a nod to the original books, but which has little bearing on the musical. Susan Hilferty's costumes are colorful and wildly beautiful, a cross between Victorian-era sensibility and Dr. Seuss.

At the heart of the musical is the backstory of two minor characters from Baum's Oz: the Wicked Witch of the West and Glinda the Good Witch. "Wicked" requires two outstanding performers to balance the yin and yang of the show's themes of good and evil, friendship and tyranny -- and the touring production has it in the form of Julia Murney and Kendra Kassebaum.

In Maguire's revisionist retelling, the Wicked Witch of the West -- known as Elphaba (Murney) in those pre-Dorothy days -- is a misunderstood, smart and sensitive young woman who happens to have green skin. She goes off to college with her sister, the wheelchair-bound Nessarose (Jennifer Waldman, naively controlling as the future Wicked Witch of the East). There Elphaba, shunned by all for her distinctive coloration, meets the superficial and vapid Galinda (Kassebaum), for whom life is a popularity contest and she the clear winner.

Kassebaum portrays the blonde beauty with flirtatious gestures and hyperactive energy -- her bouncing feet, a flip of the hair, a kick of the leg. Despite a somewhat nasal voice, Kassebaum brings a delightful physicality to the role, especially in the jaunty "Popular." "Don't be offended by my frank analysis, think of it as personality dialysis," she sings in a hilarious beauty makeover scene.

Murney has an enormous, stirring voice and capably demonstrates the green girl's tough determination, defiance and underlying loneliness. Her first-act closer, "Defying Gravity," is a thrilling ode to resisting limitations -- and there seems to be no boundaries to Murney's vocal ability, hitting both the highs and the lows with sustained power and control.

Despite their initial disdain for each other and the usual girlish competition -- for rich playboy Fiyero (handsomely roguish Sebastian Arcelus), for headmistress Madame Morrible's (Alma Cuervo) attentions -- Galinda (later to become Glinda) and Elphaba eventually become inseparable. When Elphaba is invited to Oz to meet the great Wizard (P.J. Benjamin), she happily takes Galinda along.

That's when things start to go wrong. Turns out the Wizard is behind a plot to suppress the freedoms and voices of the animals -- like Elphaba's goat professor, Doctor Dillamond (K. Todd Freeman). With Madame Morrible's help, the Wizard tricks Elphaba into creating those winged monkeys and intends to use her powers to rule the kingdom.

Cuervo is deliciously fiendish as Morrible, but Benjamin's portrayal of the Wizard is more smooth-talking charmer than viillainous head of state.

When Elphaba refuses to help the Wizard, Morrible -- part evil cohort, part press secretary, all spin -- launches the smear campaign that turns Elphaba into the Wicked Witch. When would-be beau Fiyero is arrested, Elphaba makes a vow to wickedness as she learns that "no good deed goes unpunished."

With metaphors in place for racism and genocide, and gentle yet shrewd pokes at the current administration -- "the best way to bring folks together is to give them an enemy," says the Wizard -- the musical ultimately falls back on the romantic storyline and leaves unfinished many of the weightier issues.

You have to appreciate a musical that attempts to tackle political tyranny and the dangers of creating scapegoats (issues found in more focused abundance in Maguire's novel), but including all these matters tends to muddle the story of friendship at its core. Among several highlights, the duet "For Good" aptly describes the power of friendship to change a person, and is the show's emotional touchstone.

Yet there's no denying that "Wicked" is a wholly entertaining visual feast with strong music and lyrics by Stephen Schwartz.

So, while the bad news is that tickets are harder to get a hold of than a flying monkey, the good news is "Wicked" will almost certainly be back.