Ajit Varki, M.D., professor of medicine and cellular and molecular medicine at the University of California, San Diego (UCSD) School of Medicine, has accepted an invitation to be an honorary distinguished professor at the Indian Institute of Technology (IIT) Madras, India. 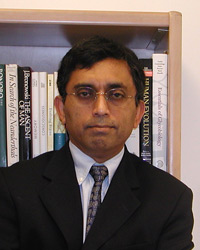 Varki joins German biochemist Hartmut Michel, Nobel Laureate and director of the Max Planck Institute in Frankfurt, and K. R. Rajagopal, forsyth chair and university distinguished professor of mechanical engineering at Texas A&M University, as the only scientists appointed to such professorships at the IIT.

The IIT Madras is one of India’s foremost institutes of higher technological education and basic and applied research. The 50-year old institute is part of the seven-campus IIT system across India, which has generated many leaders of the current technology boom across the globe. Located in Chennai, the capital of the southern state of Tamilnadu, the institute has 15 academic departments and nearly 100 laboratories, with advanced research centers in various disciplines of engineering and pure sciences. It has established a reputation as a premier center for teaching, research and industrial consultancy in India.

Varki will visit the institute periodically to interact with students and faculty. His own research interests are currently focused on a family of sugars called the sialic acids, and their roles in biology, evolution and disease – far outside of the realms of engineering, computing or technology, which are the current strengths of the IIT system. His appointment, brought about by the institute’s interest in developing a program in biotechnology, represents a new direction for the IIT

Varki is a physician-scientist who studied at the Christian Medical College in Vellore, India; the University of Nebraska; and Washington University in St. Louis. In addition to being a world authority in the field of glycobiology – the study of the structure and function of complex sugar molecules – he has formal training and certification in internal medicine, hematology and oncology. Varki is co-director of the Glycobiology Research and Training Center at UCSD and serves as coordinator for the multidisciplinary UCSD Project for Explaining the Origin of Humans. He is the recipient of a MERIT award from the NIH and is an elected fellow of the American Academy of Arts and Sciences.