Westfield centers in San Diego County to be expanded, upgraded

A groundbreaking was held in July for a 300,000-square-foot expansion of the Plaza Bonita Shopping Center, and that's just the beginning of the work Westfield has planned in San Diego County.

The expansions are part of a roughly $2 billion effort by Westfield, a Sydney, Australia-based holding company, to upgrade 15 of its 30 centers nationwide over the next several years. 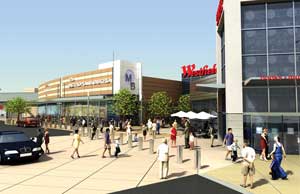 Plaza Bonita is a 25-year-old, 800,000-square-foot mall in need of an upgrade as well as an expansion. The old Montgomery Ward space is being demolished in part to make way for a 139,000-square-foot Target (NYSE: TGT) store. That site has been vacant for the past five years. Westfield has transformed former Montgomery Ward sites into Target stores in Mission Valley here and in San Jose.

The additions also will include an AMC Theatres multiplex, a 23,000-square-foot Border's Books, 40 new shop spaces, new restaurant spaces and a new food court. Along with a new parking structure, other amenities will include Westfield inventions such as "Playtown," a venue for toddlers, and the "Family Lounge" for adults.

Katy Dickey, Westfield spokeswoman, said construction on Bonita is slated for completion some time in 2008. She said Westfield handles both its architectural and general contracting services in-house.

Plaza Bonita will soon get more competition when the 860,000-square-foot Otay Ranch Town Center opens in October with 150 retail shops. The anchors there will include Macy's, Barnes & Noble, REI and Ann Taylor.

Some of the existing Plaza Bonita stores include Robinson's-May, which will convert into a Macy's in September, J.C. Penney, B Dalton Bookseller, The Foot Locker and Victoria's Secret.

At North County Fair, where an existing 1.2 million-square-foot enclosed mall is being augmented by 445,000 square feet, the plan will include a cinema complex (the number of screens is still being determined) restaurants, new anchors and more shop space where parking lots exist today. Parking structures will replace the lost surface spaces.

As far as a timetable is concerned, Dickey said projects like these take 18 to 24 months to develop once they have received final approvals. Such a project will require an environmental impact report, which could take two years to complete. Dickey said planning is very preliminary for a major expansion of Plaza Camino Real. Westfield's recent acquisition of the 150,000-square-foot Robinson's-May building will open up some opportunities.

The exact square footage is still being determined, but more than 400,000 square feet could be added to the mall, including everything from additional anchors to cinemas and shop and restaurant spaces. "We'll have new shops, fine dining, a bookstore and home goods offerings," Dickey said.

This mall too will see a major upgrade as part of the expansion.

Dickey said plans, although still nebulous, are also moving ahead to expand UTC. The Transcript reported in 2001 that this was to be a more than 700,000-square-foot expansion to what is currently a 1.03 million-square-foot mall.

That plan also once called for 500 upscale multifamily units.

"Things change," Dickey admitted without offering much further explanation, but suggested that a more modest proposal may be in order.

The cornerstone of that earlier project including the residences was a 60,000-square-foot multiplex theater. Mann Theatres was originally in the mall when it opened in the 1970s, but has been out of the center. UTC plans (the mall has about 145 existing stores) may be part of the proposal to build the light rail line up from Old Town to University City and La Jolla. This line has a proposed loop that would travel between UTC and UC-San Diego.

As for expanding its other malls here, Dickey said aside from changes thatalways occur periodically at individual stores, there are no significant expansion and or redevelopment plans at Parkway Plaza in El Cajon (where a Wal-Mart was installed about two years ago), at the Mission Valley Shopping Center or Horton Plaza.

The northeast corner of Horton, incidentally, is where Westfield has proposed to place an office tower. This is where a Robinsons-May and Planet Hollywood formerly existed and Sam Goody retains a space today.