Warnings about a decline in San Diego's residential real estate market have merit, but commercial and industrial real estate will likely have an average year in 2007, according to a panel of industry experts.

Home prices may be falling and numerous condo conversions have been reverted to rental space, but saying that the local real estate market is tanking is a broad overstatement, many of those involved in the industry say. In San Diego in particular, the overall real estate market should remain viable.

"A year ago pretty much everyone was predicting that this was going to be the year interest rates were going to go up, capital was going to slow down, but we have seen no slowdown in the amount of capital on investment properties," said Jay Alexander of Colliers International. "There still is a lot demand from investment capital here in San Diego."

Those on the lending end of the development industry saw bright spots in the 2007 landscape as well. "Loans are starting to make sense again," said Ann Block of Washington Mutual (NYSE: WM). "I can now get a loan to 70, 75 percent. We haven't seen that for the last two and a half years." Block said sellers are being more realistic, transactions are going through more renegotiations and banks have become more creative -- all leading to the change. 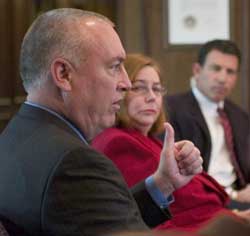 Tony Pauker of the Olson Co. said some media reports have exaggerated the market's downturn and people who read the reports are then scared to buy. "Representing the for-sale housing market, '06 was decidedly much less fun (than previous years)," he joked.

Pauker said he expects the market to pick up in the latter half of 2007.

Jim Taylor of Sperry Van Ness said he recalled a meeting of different real estate developers last year where 80 percent of multifamily homes pitched were some kind of condo conversion. In the last quarter, there were no condo plays. Sales on condos were down too, he said.

According to Taylor, however, the worst thing for the commercial real estate market is a stagnant marketplace. Even if the numbers are moving downward, it's better than not moving at all. "We're like elevator operators: we make money when there's a change," he said. "The market's been a little stagnant, so we're hoping it goes up or down soon."

Mark Read of CB Richard Ellis said it's unlikely the market will remain stagnant. Office building construction is still going fairly strong, he said. Read said he was excited about his office moving into the Diamond View Tower downtown, which overlooks Petco Park. Ultimately, Read predicted that as long as commercial real estate remains a viable commodity in San Diego, private property will not lag too far because people want to live as close as possible to where they work. Demographics can shift when commercial real estate begins expanding into suburban areas. One of the best markets right now, Read said, is Temecula.

"There's an incredible amount of new construction and absorption in Temecula. Even though it's growing so rapidly, the vacancies are still low," he said. "People will move to Temecula to afford a house and commute down to Rancho Bernardo, until they get a job in Temecula."

In the next year, as sales go down, renters in commercial and residential buildings could see their rents go up, all the experts predicted. Generally though, they did not foresee a massive real estate upheaval in the county.

Click here to view other articles in The Daily Transcript's "Who's Who in Real Estate" special report.