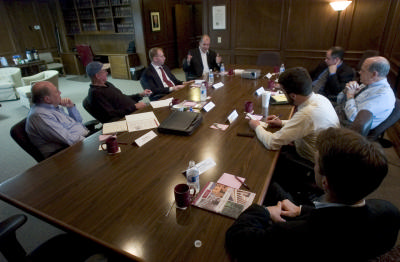 San Diego stands to benefit from the efforts of the U.S. Patent and Trademark Office, Congress and the courts to improve the quality of patents, according to a recent roundtable hosted by The Daily Transcript.

"We're not going to see a quantum change from Congress or the courts, but there is change," said Pedro Suarez, an intellectual property attorney in the San Diego office of Mintz Levin Cohn Ferris Glovsky and Popeo PC. "We have a lot invested in IP ... it's an important part of our economy. The change will be slow, but the change will happen and for the better.

"The patent office hears the calls from Congress and the public that we need better quality patents. I think everyone agrees we want higher quality patents, and they have taken some actions to improve the quality of patent system."

One of the issues the PTO is trying to solve is the call for more transparency in the identification of prior art -- the body of public knowledge that predates the patent application.

The patent office is testing a community patent review program in which any member of the public can identify prior art for patent examiners to consider in a Wikipedia type of environment.

"With pre-issuance, one of the biggest criticisms with the patent office is that they're not identifying all the relevant prior art or past works by people -- whether it's patents, articles, Web sites -- when they're examining patents," said San Diego's Carl Kukkonen, an intellectual property attorney for Mintz Levin.

Since prior art can be found in Web sites, student theses and profession publications, it's not always easy for examiners to be aware of every piece of relevant material.

"The examiners historically have overwhelmingly used other patents as prior art," said James Cleary, a patent law attorney in San Diego for Mintz Levin. "With San Diego being a university town, a lot of prior art could be in student theses and publications or things that professors are putting out there, and it may not be accessible to an examiner sitting in Washington, D.C."

The inherent problem opening the process up to the public, however, is that it's only as good as the participants, cautioned Phil Baker, a technology columnist for the Daily Transcript and a product development consultant.

"It has to be well-moderated and well-controlled," he said.

Another concern, Kukkonen added, is the public identifying irrelevant prior art, which could slow down the process by increasing the examiners' workload.

In another attempt to increase the quality of patents, the PTO instituted a program called "second set of eyes," in which an additional examiner looks at an application's claims.

The patent office also is cracking down on the number of patents it's issuing.

In 2005, approximately 75 percent of cases were allowed to issue a patent. Last year, that figure dropped to 54 percent.

"The patent office may have gone too far here," Suarez said, "because there are probably inventors out there that are having difficulty getting their applications issued, and they're probably deserving of a patent. But the patent office is really turning the screws in response to the cries from Congress and the public that there's too many poor quality patents."

Congress, meanwhile, has been wrestling with legislative changes for more than two years in its latest attempt to overhaul the nation's patent system.

One suggestion lawmakers have offered is to change from a "first to invent" system to a "first to file," which is the system used throughout the world.

Legislators also are contemplating the idea of opposition, which is another provision used in many other countries. It gives the public six to nine months once a patent is issued to challenge the validity of a patent application. It's another response to transparency, Kukkonen said, while getting the United States closer to harmonization.

Additionally, Congress is proposing a pilot program to educate, train and provide additional resources for courts in the area of patent law. Rep. Darrell Issa, R-Vista, is among the sponsors of the legislation, and San Diego could be part of the test program.

The congressional battle has been political and has pitted big pharmaceutical companies against big high-technology companies.

"Both do win if the patent office works better to get better patents," said William Decker, the assistant director of physical science licensing at the University of California, San Diego.

On the judicial side, the U.S. Supreme Court is leading the charge of patent change, Suarez said. It's taken on an increasing number of patent cases, acknowledging intellectual property's important place in the American economy.

The high court is making sure that patent law is consistent while the federal circuit court -- the appellate court system for patents -- also is working toward consistency, Suarez said.

Not all change is good, according to UCSD's Decker.

For San Diego's startup community, the need for intellectual property protection isn't that great early on, according to Rory Moore, the chief executive officer of CommNexus.

"From the startup stand point, IP protection is expensive," he said. "And it's really hard to justify a huge amount of money in the first round and the use of proceeds for IP protection. They (venture capitalists) want you to hire the right people, get a product banged out and get it in front of customers."