Emotiv delves deep into brain for next level in gaming technology

GDC 2007: Emotiv delves deep into the brain for next level in gaming technology 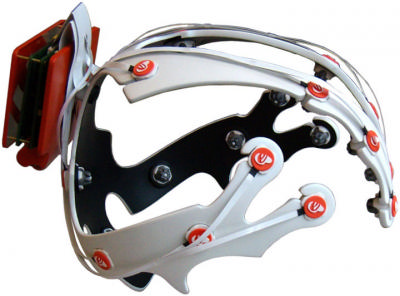 After three years of operating in stealth, Emotiv Systems emerged from secrecy during this year’s Game Developers Conference to unveil a revolutionary product that might very well change the way we interact with video games.

I was able to get a first-hand demonstration of Emotiv’s product during the conference -- it’s unlike anything I have ever seen.

Code-named Project Epoc, this device is similar to an electroencephalogram (EEG) used to record brain activity. While EEG technology is nothing new, Emotiv has managed to not only find an application for its use outside of a clinical setting, but also refine this technology to differentiate thoughts within the brain.

To achieve this complex level of detail, Emotiv’s technology looks beyond the outer cortex -- which is as unique to an individual as a fingerprint -- and probes deep into the region of the brain to analyze where the thought signal originated.

This type of analysis is also a huge leap beyond previous attempts at EEG systems that simply tried to attach actions to primitive brain states, such as relaxation or attention within their respective applications.

As you can imagine, this limited not only the amount of interactivity between user and application, but also the manner, which was usually counterintuitive to how our brains naturally perform actions, in which users activated these systems. For example, in some other applications, if a player wanted to move an object, the device would require users to either breathe heavily or place their brains into a somewhat agitated state in order to trigger that action within the game.

By comparison, if players wish to lift a rock using the Emotiv system, they need only think about the act of lifting the rock to make it happen on screen.

Origins of Emotiv During my closed-door demonstration, Nam Do, co-founder and CEO of Emotiv, gave me a brief overview of the company and the people behind bringing this innovative technology to life.

Headquartered in San Francisco with a research facility in Sydney, Australia, Emotiv Systems was founded in 2003 by four individuals. On the business side of the company, Do is joined by longtime business partner Tan Le, who serves as president. Prior to the formation of Emotiv, Le collaborated with Do to found SASme, a leading wireless company in Australia. Joining Do and Le on the technology end is renowned scientist Allan Snyder FRS, whose theory behind optical fiber won him the 2001 Marconi International Prize. Pioneer chip-designer Neil Weste rounds out the team.

Do explained that while this technology clearly has a wide range of applications in both the commercial and medical realm, the company is focusing its initial efforts on entertainment, and in particular video games.

When the decision was made to target the video game market, the company brought industry veteran Randy Breen on board to serve as chief product officer. This addition gave the company legitimacy from a gamers’ perspective; prior to joining Emotiv, Breen was the producer of the highly successful "Road Rash" series from Electronic Arts and later served as vice president and head of development at Lucas Arts.

Breen said his responsibility has been to get the project from research to product stage. He also said the device they were using for this presentation was not going to be the same one consumers would see once it went to market.

That being said, the current iteration of the device is still impressive in its own right as the electrode-studded wireless headset worn by the user is already capable of interfacing with a USB device roughly the same size as a standard thumb-drive.

How it works For the demonstration, Breen began by showing off the software detection suite developers use to incorporate the Emotiv device into their games.

First was the Expressiv suite, which is responsible for recognizing facial expressions and movements. During this portion, Breen instructed the engineer wearing the headset to run through a series of facial gestures. As the engineer smiled, blinked, frowned or moved his eyes, the Emotiv headset was able to detect those changes and transmit them back to his character on the screen -- all of which was done in real-time and without the aid of camera. Le said just “this facial recognition alone could have a huge affect on the social aspect of games,” since players wouldn’t have to stop what they were doing to simply type in an emote command.

Next, Breen showed off Emotiv’s Affectiv suite. This particular module tracks the emotional state of the player by using a series of graphs.

When Breen directed my attention toward the engineer wearing the headset, a graph rose to coincide with the user’s levels of excitement and calm. As Breen started to discuss different aspects of the system, the engineer’s graphs began to fall since he was no longer the center of attention. Picking up on this fact, Breen quickly said, “See how the graphs are falling? That’s because our focus has been drawn away from him.” Almost immediately the graphs rose and the engineer was visibly blushing by the refocus of attention to himself.

The Emotiv team went on to suggest a variety of uses for this type of recognition. For example, in a horror survival-type game like “Doom,” developers could use this data to know exactly when to trigger surprises in the game so they could make sure they got the maximum amount of shock value out of the player.

Lastly, and most impressive, was Emotiv’s Cognitiv suite. As stated before, by focusing on a particular act such as lifting a rock, players are able to translate those thoughts into actions within the game world.

Currently, Emotiv’s technology can distinguish between 12 different actions such as pushing, pulling, lifting, rotating, etc. During the demonstration, the engineer showed off just how easy this was to do.

Using a replica of Stonehenge, the engineer was able to lift the stones as well as hold them in place, although the latter took a bit more concentration. He also pushed the massive boulders, which instantly reminded me of a Jedi’s Force powers.

After completing the demonstration of the Emotiv software suite, the team showed off a working example of this technology using the new Harry Potter game.

For this part of the presentation, Breen used a game pad to control the character's movement while the engineer focused on casting spells using only the Emotiv headset.

After showing some basics, Breen handed me the controller so I could see first-hand how all the magic powers being used were being done by the engineer using the headset and not the game pad. Slowly I maneuvered the character down to an obstacle that could only be crossed by picking up a large boulder and smashing it into the obstruction. Working in tandem, the engineer picked up the boulder with the Emotiv headset while I used the game pad to propel it into the wall.

After this demonstration, I was sold.

A lucrative future? Hopefully, the industry will also be sold as more is known about Emotiv’s product. Due to the series of past failures by others using similar technology, however, some developers may be dissuaded from immediately coming on board. Still, given the rapid success of the Wii, the market may be poised for Emotiv to take the industry by storm.

After all, imagine a Star Wars-based video game that used the Wiimote to maneuver the character and light saber, while the Emotiv headset was used to activate force powers. Unfortunately for now, I’ll just have to wait to get my hands on one until the product is ready for launch in 2008.