The new Hard Rock Hotel downtown is in its final phase of construction, set to open early this fall with a kickoff celebration that may include a concert from the Black Eyed Peas, who have also designed their own suite in the hotel. The 312,000-sqaure-foot project will include a 12-story hotel, bars, restaurants, a concert venue and 40,000 square feet of indoor/outdoor meeting space.

Robert Todak, general manager of the Hard Rock Hotel, said construction is 75 percent complete, and they've only had to make "modest adjustments to the timeline, but we haven't had any insurmountable obstacles.

"All the windows are in, all the balconies are in; it's looking really good," he said. "The significant construction is pretty much complete; now it's really just the installation of the customized finishes and all the little details. The guest rooms are pretty far along, and so are the meeting spaces. And we are really working nonstop on the restaurants and bars." 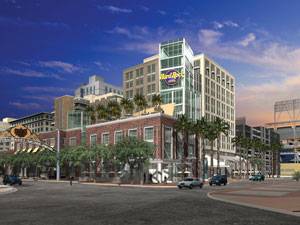 The 420-room Hard Rock condo-hotel development will celebrate its grand opening in December.

The hotel will include a lobby lounge and rooftop bar by the Gerber Group; famous sushi bar and Japanese restaurant Nobu; a coffee shop; a famous Los Angeles yogurt shop; full-service spa; rooftop pool with cabanas; a Hard Rock retail shop; a two-story parking garage and a concert venue called the Vault. Todak said everything is scheduled to open with the hotel in early fall except the Vault, which will open in time for New Year's Eve with a "big bang."

The project appears to be divided into four buildings from the exterior, with four distinct styles, although visitors can walk inside from one end of the site to the other without obstruction.

"There's four different treatments as far as the exterior: there's some brick, there's some metal, glass, it makes it very interesting. It really works incredibly well in the Gaslamp, and a lot of thought was put into play as far as how it can be worked into this historic environment and the architectural integrity of this area," Todak said.

One section of the building was originally the first train depot in San Diego, and Todak said it has been "constructed it to exactly what it looked like back then, at least as far as the exterior."

Located at the entrance to the Gaslamp Quarter, across the street from the Convention Center, and only one block from Petco Park, the Hard Rock Hotel offers 420 rooms with prime location and views.

"Once you get above the ninth floor, you've got a great vantage point in different directions," Todak said. "Where the Gaslamp Arch is, you've got rooms that overlook it; if you clear the convention center, you're able to look at the bay; and we've got plenty of rooms that have Petco Park views.

Tarsadia Hotels is the developer and owner of the Hard Rock Hotel, and construction was started in November 2005 by Turner Construction Co.. Local architect Graham Downes designed the interior of the hotel, with the exterior designed by Carrier Johnson. The Rockwell Group designed Nobu, with the Vault and coffee shop by Hatch Design, and the pool deck and Gerber bars by Architropolis.

Turner Construction was awarded the $85 million contract in September 2005. Although Tarsadia Hotels set no "green" standards for the construction, Todak said, "Once the hotel opens, from an operation standpoint, we have multiple initiatives that we'll be putting into place. One of the mottos of Hard Rock is 'Save the Planet,' and we will take that very seriously."

Turner Construction's project executive for the Hard Rock Hotel, Dave Holland, said, "Turner always has a recycling policy for any product or waste or trash as part of every project, so that piece is always part of a job we do, and has been here."

Other notable projects by Turner Construction in San Diego include the expansion of the Convention Center finished in 2000 and the $100 million IDEC Pharmaceuticals Corp. world headquarters.

"This is our landmark project for the San Diego office, and it's been challenging and exciting at the same time to work on such a hot ticket," Holland said. "Everybody's real excited for its opening, so it makes all of our project staff enthusiastic about getting this thing done, and getting it done on schedule."

As a condominium-hotel, all of the rooms have been sold to individual owners, who then have the option to join the hotel rental management program, which will allow the hotel to rent out their room while giving them a percentage of the revenue. Todak said he has not encountered any owners who don't want their rooms rented out.

The rooms sold for an average of a little less than $1,240 per square foot, and owners are allowed to occupy their rooms for up to 28 days a year, with no option for personalization.

"The package is pre-determined and is fully compliant with Hard Rock brand standards for a luxury urban hotel, so there's no opportunity to customize. And really, the owners appreciate that too because to be successful in this business, consistency and continuity are important," Todak said. "We want great service delivery and surprises of a delightful nature from service, not from somebody going in the room and finding somebody else's picture frame there."

Todak added that the hotel room ownership concept is popular in the East Coast and in travel destinations such as Florida, Colorado and Hawaii.

"As a developer it's a great situation because you are basically financing your development through the sales of units, and for the owner it's an opportunity to have a nice piece of real estate in an absolutely prime location in the heart of San Diego, and when you're not there you'll be sure to drive income out of that to offset the costs of your investment," Todak said. Owners will have a separate department devoted to giving them special services, such as top priority for events and reservations and discounts at other Hard Rock locations, he added.

One of the Rock Star Suites was designed by members of the pop band Black Eyed Peas, after Sean Dee, a friend of the band and VP of marketing for Hard Rock International, told them about the Hard Rock Hotel in San Diego. The suite is owned by the band's charity, the Peapod Foundation, and their share of the proceeds will go to providing support and opportunities for disadvantaged children. Todak said it will be the band's "home away from home," personally accessorized even with their bathrobes.

Todak said he is hoping for a concert by the Black Eyed Peas to help kick off the grand opening of the hotel in December, with other events mostly devoted to room owners.