Standing at 450 feet and rising up from the old San Diego Gas & Electric (SDG&E) downtown facility, Bosa Development's residential tower Electra represents not only the tallest such structure in San Diego, but a prime example of incorporating a historic structure into the design of a new development.

The 43-story building, which comprises 248 residences above three floors of underground parking, was recently topped out.

Prior to Bosa's development, the site originally housed two buildings constructed by John Spreckles in 1911. The buildings contained the boilers and turbines for what was then the new San Diego Electrical Railway Co., according to a Bosa release.

In 1921 SDG&E purchased the property and expanded the facility to provide for the city's increasing energy needs. 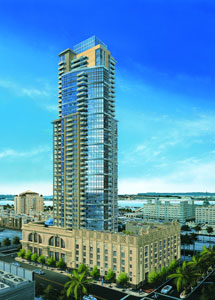 Bosa maintained the exterior of the historic SDG&E building while creating a new tower inside the shell of the existing structure.

In 1998 Marie Burke Lia, a San Diego attorney who specializes in historic properties, along with Kathy Crawford, a historian, completed a full report of the building that was presented to the city's historic resources board.

Later that year, the building was deemed historic and an effort to find an adaptive re-use of the structure began. According to Burke Lia, all approaches to rehabbing the existing building involved maintaining the exterior of the SDG&E building while creating a new tower inside the shell of the existing structure, which is a complex process Bosa chose to undertake when it purchased the site in 2003.

"It costs so much to preserve and reserve the shell that the amount of development had to be substantial," Burke Lia said.

According to Chris Dikeakos Architects Inc., the project presented an architectural challenge in that it was not built from the ground up like many of the other high-rise projects in downtown San Diego.

"The biggest construction challenge was demolishing the inside of the building while still maintaining its historical facades, some of which are 80 to 90 feet in height," the firm stated.

The architect also had to design the project from the inside out so that the new building being created interfaced with the existing structure. For example, an interior balcony space from the historical building was kept and has now become the meeting space for the new building.

"The unusual building process that has gone into preserving the site's history will truly make this high-rise a landmark in design excellence," said Nat Bosa, CEO and founder of the development company.

According to Bosa, all units were sold within the first three months of being placed on the market, with prices ranging from $375,000 to $2.4 million.

Completion for Electra is anticipated in December of this year.

"This is the biggest project of this type that I've either seen or heard of," Burke Lia said.

Another new development in San Diego that incorporates an existing historic building into the new structure is Icon, bound by J and K streets, and 10th and 11th avenues.

The completed project, which incorporates the old Carnation Building, consists of four residential towers ranging from five to 24 floors with 327 condominiums and 16,000 square feet of retail space.