Construction for the new 32-story Hilton Convention Center Hotel is about halfway complete, and rooms are set to be available starting in December 2008. The more than 1 million-square-foot site will include a public park, a pier for water taxis on an adjacent site, a parking garage, retail, restaurant and 100,00 square feet of meeting space.

Phelps Portman San Diego LLC is the developer of the project adjacent to the Convention Center, and construction was started in April 2006 by Hensel Phelps Construction. Hensel Phelps' project manager for the Hilton project, Tom Diersbock, is pleased with the progress so far.

"The steel erection is complete and we're working on the exterior curtain wall right now. Our concrete structure is up to level 22, and we should be done structurally all the way up by Thanksgiving," he said. "And right now we're starting interior framing and all the mechanical and electrical, too. We're about 50 percent complete with the job as a whole." 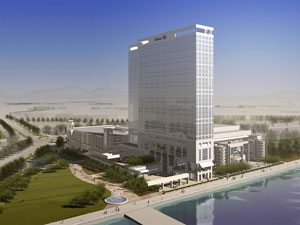 The Hilton Convention Center Hotel, scheduled for a December 2008 opening, will feature a waterfront park, a restaurant, parking garage, retail and meeting space.

A 66-year lease for the land was signed between owner One Park Boulevard LLC and the Port of San Diego in January 2006, and the port is in charge of parts of the project. It is developing the Mole Pier for water taxis on Fifth Avenue, constructed by Traylor Brothers Construction, set to be completed in about three months. The hotel sits on the former site of the Campbell Shipyard, so the port has also done remediation on the land to remove leftover shipyard contaminants from the soil.

The Hilton San Diego Convention Center was the initial name chosen for the hotel, but owner One Park Boulevard is now working to come up with a new name, Dierbock said, because there is no actual affiliation between the new Hilton and the Convention Center.

The hotel's 1,190 rooms will include two presidential suites, two executive suites and 26 other suites, with the rest as typical queen and king guest rooms. The rooms will average 400 square feet and were designed to have ideal views from either the Southeast or Northwest, although the hotel overlooks the higher side of Petco Park, so it would be difficult to see inside.

"The building is situated so the view corridor to the water was maintained, and the rooms on either side have really incredible views," said Keith Stewart, the developer's project manager. "Because the Convention Center is next door, we don't have another tower blocking the view next to us on either side, so the views are quite amazing."

A 2,000 space Ace parking garage on the site is already in use for the Convention Center and Petco Park, and once the hotel is complete, Stewart said more than 800 spaces will be leased by the Hilton Hotel and reserved for guests.

Another helpful addition to the hotel would be the proposed pedestrian bridge crossing the train tracks over Harbor Boulevard. It would connect the waterfront to Eighth Avenue, giving easier access to the Hilton and Petco Park for people who otherwise have to walk all the way down to the Convention Center and cut across at Fifth Avenue. Although the 466-foot suspension bridge has already been designed by T.Y. Lin International, its anticipated cost of almost $25 million is over budget. The city is planning to bid out the bridge next month in order to get sufficient funding.

"If the bridge is completed, then we'll have a direct tie to all the new developments in East Village, so the location is going to be absolutely great: directly adjacent to the Convention Center, right on the bay front, in a part of town that's growing the most, and with the best views of San Diego," Stewart said.

The hotel is similar in height to others surrounding it, but Stewart said many things set it apart from its neighbors.

"It's the only hotel along the waterfront in San Diego where, from the lobby at the second floor, you'll have great ocean views toward Coronado. In fact, there are great views throughout the property. When you are in the restaurant at the first floor you view the public park; at the second floor lobby bar you have spectacular bay views; in the guest rooms, which are on the upper floors, you feel like you're almost on the water," Stewart said. "I think that the experience is very unique in this hotel."

The 4.3-acre grass park will be used for hotel events, and Stewart said it is the only waterfront park in the area. Sasaki Associates Inc. is the landscape architect for the park, which is included in the $348 million development cost. The park, pier and hotel are all on track to be completed late next year, Stewart said.

"Construction's on schedule, the project's within budget, and we've been able to do some really nice things with the design of the facility," he said. "I think it's going to be one of the nicest large convention center hotel projects on the West Coast, and it's going to be a beautiful project when it's done."