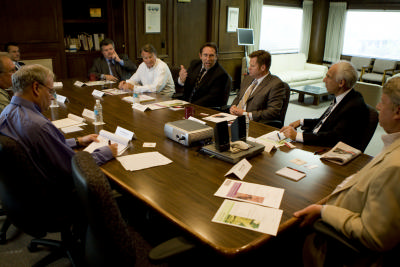 Times are slow now, but the real estate industry is already preparing for the boom that follows the fall.

With a few indications that the market is beginning to turn around, most participants at a roundtable discussion about the residential real estate industry hosted by The Daily Transcript on Friday were confident that the low point has come.

Just how long the market will stay at the bottom remains to be seen, but many predicted a turnaround in 12 to 18 months.

It's a time of tension in the industry, while players wait to see what will happen -- Robert Laing of Barratt American likened it to a child's game.

President and CEO of Greater San Diego Coldwell Banker Rick Hoffman said potential buyers are out looking at the numerous foreclosures and slowly buying up the inventory. He said he tells the same thing to struggling Realtors.

"I tell them they're just suffering the great real estate hangover of 2007 that carried into 2008."

Builders are optimistic that by mid-2009 and 2010, the inventory of foreclosed homes will be thinned out enough that buyers will look at new homes.

Ure Kretowicz, CEO of Cornerstone Communities, said his company plans to start building infrastructure and grading land now, so the models will be ready when the buyers come a year and a half from now.

"I see the market being fearful, and I think it's time to be greedy in the marketplace," he said.

Laing said Barratt American planned to do the same.

However, some believe the real problems were just halted. With the Fed stepping in and assisting distressed homes, Tom Archbold of Hallmark Communities said the consequences of all of the "funny money" given to unqualified buyers are still likely to be played out.

"We probably haven't seen the majority of the results yet," he said, noting that there are still mortgages out there that will be adjusted.

Those involved in the discussion blamed banks giving money recklessly to people who shouldn't have qualified for a loan.

"I think that is one of the main culprits for the situation we're in now," Ellis said. He said 100 percent financing was a disaster waiting to happen.

Easy money led to low accountability levels. Ellis believes 90 percent of people turning in their keys to the bank could afford the adjusted payments -- they just don't want to scrimp out on their lifestyle.

The homes that have foreclosed are bringing the median home price down a bit, but not enough to make homes affordable to the common person, said Paul Tryon, president of the Building Industry Association.

Affordability is a big issue because it brings in more buyers, leading to a correction in the market.

"We're three years into it and I don't know how it's going to correct itself from an affordability standpoint," said Russ Haley, vice-president of CityMark Development. He believes the slowdown started in 2005.

There are incentives on the market, and federal assistance programs like FHA and VA loans are helping. The participants all agreed that with low interest rates and falling prices, now is the time to buy -- and people are noticing. Hoffman said a foreclosure in San Diego County recently brought in 25 offers.

Buyers will have to deal with banks who are wary about giving away money, but Kretowicz said even that will ease up as banks realize they must do mortgages to stay in business. A buyer with a 3 percent down payment and 680 credit score could likely qualify for an FHA loan.

For homebuilders, the slump is providing motivation to start preparing for the next boom.

"We're actually seeing costs drop," Kretowicz said. Prices for national commodities like wood are dropping. However, the cost of aggregates, a competitive international market, is not.

There's also a problem with the waiting inventory, especially for urban developments -- developers can't sell at the cost it took to build them. "He's selling condos for the price it's going to cost him to build in the future," Kretowicz said of urban developers.

Those who blame the banks believe the financial industry has learned a lesson.

"I personally think we'll never see a problem like this again," Ellis said. "Really and truly, we're going back to how things used to be.

The building industry will also learn a lesson or two.

The slump, participants added, will affect whom the industry votes for in upcoming elections.