Appraisers, in exercising due diligence – particularly for donation appraisals – must investigate to the extent possible the provenance and legal title of cultural property.

On February 25 the new Director of the San Diego Museum of Art, Dr. Derrick R. Cartwright, spoke candidly to members of the Latin American Arts Committee on an important topic: cultural patrimony and the role played by museums in guarding against illegal traffic of cultural and stolen property.

The talk was particularly interesting in light of recent events surrounding an 18th century Mexican colonial painting, Expulsion from the Garden of Eden, purchased by SDMA in 2000.

During provenance research conducted by the San Diego Museum, it was discovered that the painting might have been stolen from a church in a small village in the State of Hidalgo, Mexico. Frequent thefts from small village churches, where security is poor and documentation is practically non existent, are cause for great concern. Important colonial religious art and liturgical silver objects have been aggressively targeted by thieves who are savvy that the thefts often go unreported beyond the local authorities, and they are difficult to prove due to lack of recorded inventories and photographic records.

The Museum’s Board of Trustees voted to return the Expulsion from the Garden of Eden to Mexico and Dr. Cartwright generously offered to have the painting restored before sending it back. The artwork had been torn from its frame by thieves and remnants of canvas remaining in place. If brought to the US for restoration purposes, the frame with its bits of canvas fragments, when matched up with the painting, would also establish concrete proof that it is indeed the stolen work of art. 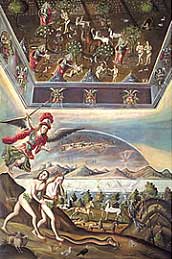 The Latin American Arts Committee hosted Director Cartwright’s talk in the spirit of informing collectors about the problems inherent in purchasing Latin American art and artifacts and educating them about international laws and treaties governing cultural property. Latin American Art historian Marta Garsd, who served as special advisor to the Argentine Supreme Court on art thefts and forgeries, followed Dr. Cartwright with an in-depth presentation on the same topic.

Dr. Cartwright presented an overview of the categories of Latin American art covered by the treaties with Mexico and a summary of the current status of international cooperation in the repatriation of cultural property by museums. Members learned about new proactive policies put in place at SDMA in order to avoid purchasing stolen or illegally acquired property, such as asking dealers and auction houses for warranties covering legal title. Cartwright explained how SDMA is currently blazing the trail on this issue by not only embracing the AAMD guidelines (summarized below) but going a step further in assuming responsibility to “make whole” the stolen property before its repatriation.

The Association of Art Museum Directors (AAMD) recommends taking proactive steps BEFORE acquiring a work of art, such as conducting extensive research on how and when an item was brought into the country, and how it was acquired by the seller. Before purchasing or otherwise acquiring property, documentation papers must be aggressively sought and available databases on stolen art researched (such as ArtlossRegistry.com). Ancient and archeological items must have been legally imported prior to 1970, the date of the UNESCO Convention on the Means of Prohibiting and Preventing the Illicit Import, Export and Transfer of Ownership of Cultural Property. Additionally in cases where, after conducting appropriate research, provenance is found to be incomplete they recommend NOT acquiring works that have been in the US for less than 10 years. They encourage publication of each acquisition immediately after and within the first two years of museum ownership.

Collectors and appraisers should all be urged to take the same precautions. Particularly in the Western United States, appraisers need to be aware of international conventions and laws pertaining to Latin American art, artifacts and cultural property. For example, it is important to know that Mexico considers ALL pre-conquest (Pre-Columbian) art and artifacts to be the property of the State – regardless of what country they reside in. Mexico does not recognize ownership of these items by any other entity. Additionally, Mexico considers objects from the Colonial periods (circa 1600 to 1900) as “Historical Patrimony” that cannot be exported. Mexico enacted its federal Law of Archaeological, Artistic and Historic Monuments and Zones in 1972, but was also a signatory to the UNESCO Convention of 1970 and the Hague Convention of 1954. 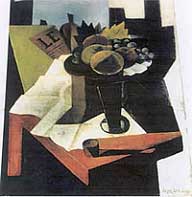 Mexico also has a special cultural patrimony category called “Artistic Monument” that applies to paintings, drawings, and sculpture by a small select group of Mexican artists such as Diego Rivera, Frida Kahlo, Jose Clemente Orozco and David Alfaro Siqueiros and others. Beginning in the 1950s, these artists were named national treasures by presidential decree. After an artist has been named to the list, their works of art residing in Mexico in either private or public hands are not allowed to leave the country. Works that left Mexico before inclusion on the register, however, are free from patrimonial restrictions.

To illustrate the dilemmas introduced by this law, Dr. Cartwright read from a recent Christie’s sale catalogue of major Latin American Art. A painting by Diego Rivera was being offered in the New York sale but the catalogue clearly states that the painting was currently in Mexico and was legally part of that country’s cultural patrimony. Buyers would have to take possession of the artwork in Mexico, and restrictions were in place against the exportation of such works. Other works by Rivera that were (physically) in the Christies New York sale were presumably in the U.S. legally and did not have such disclaimer statements in the catalogue. Auction companies, like appraisers, must exercise due diligence in determining that title is legal and transferable.

The 1970 UNESCO Convention concerns the rights of every state to protect and prevent exportation of their cultural patrimony. It was brought about after repeated appeals from third world countries such as Mexico and Peru for international cooperation in preventing the mass exodus of cultural property looted from their archaeological sites. It was the first comprehensive multinational effort to protect cultural property by imposing reciprocal obligations on signatory countries. Today there are over 100 countries that are party to the agreement, but ironically, most of the major art importing countries whose cooperation would result in the most significant protection, did not participate until much later. Canada and Italy were among the first in 1978. The United States was not an early signatory of the UNESCO Convention but did pass, in 1983, the Cultural Properties act which, in effect, binds it to the 1970 Convention retroactively. (The U.S. also has numerous bilateral trade agreements with specific countries concerning cultural property.) France accepted the Convention as late as 1997, Japan and Great Britain in 2002, and Switzerland in 2003. Germany, a major art importing country has yet to ratify the UNESCO Convention.

What is cultural property? The premise of the UNESCO Convention gives the right to each country to define their own cultural patrimony based on what it deems important (on religious or secular grounds) concerning archaeology, prehistory, history, literature, art or science. Article 1 of the Convention covers a vast range of material:

a. Rare collections and specimens of fauna, flora, minerals and anatomy, and objects of paleontological interest;

b. Property relating to history, including the history of science and technology and military and social history, to the life of national leaders, thinkers, scientists and artists and to events of national importance;

d. Elements of artistic or historical monuments or archaeological sites which have been dismembered;

e. Antiquities more than one hundred years old, such as inscriptions, coins and engraved seals;

i. Postage, revenue and similar stamps, singly or in collections;

k. Articles of furniture more than one hundred years old and old musical instruments. Reviewing only the regulations of Mexico, we have barely touched on the numerous hot button issues concerning illicit trading of cultural property. Appraisers should know that there are laws covering cultural patrimony from many different countries and they must seek out the information that applies to the item being appraised. In today’s global art market, international cooperation concerning illicit traffic and illegal title of art objects has wide ramifications on such diverse issues as the recovery of art stolen by Nazis from holocaust victims, the claims by Greece to the Elgin marbles in Britain, and the traffic of artifacts raided from museums in Baghdad – even souvenirs of war taken by soldiers from enemy combatants. Each country, as we have seen with Mexico, has its own laws governing items declared illegal to export. It may seem overwhelming at first, but on a case by case situation when you encounter questionable items, the information is easily obtainable on the internet. Due diligence on the part of the appraiser concerning the legality of art and artifacts is required by “best practice” and professional standards and by the law. Remember that the 1970 date is of major importance when considering all cultural patrimony.