Fostering growth of fledgling companies and helping larger ones take root is Lisa Bicker's strategy to bring San Diego to the forefront of the clean technology industry.

As the new president of CleanTECH San Diego, Bicker believes America's Finest City has the potential to become an international center for clean technology. Among the city's assets are its vast availability of sun and wind, international border and a can-do mentality, Bicker said.

"What we have here in San Diego is a culture of collaboration and a mentality of taking a good idea and turning it into an economic engine," Bicker said. CleanTECH San Diego is the brainchild of Mayor Jerry Sanders. After noticing the region was beginning to draw a contingency of clean technology companies, Sanders established the nonprofit trade association. The organization defines clean technology as green, renewable and alternative technology in the industries of energy, water, recycling, transportation, materials, manufacturing and agriculture. 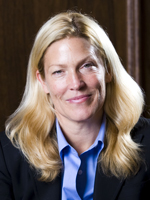 A lawyer with over 20 years experience in the renewable energy industry, Bicker joined the trade association in February. Bicker hails from the San Francisco Bay Area, where she served as president of the California Clean Energy Fund (CALCEF).

"I am very hopeful about organizations that combine the private and public sectors," Bicker said.

"When you combine so many interests, the blend is very powerful," Bicker said.

She plans to use that power in advocating for renewable energies on the city, state and national levels. One of the organization's primary focuses is the proposed state-funded research organization to focus solely on climate change, supported by Gov. Arnold Schwarzenegger. The creation of such an organization is only a matter of time, and Bicker wants to make sure it is headquartered in San Diego, she said.

The organization would be an asset to the region, drawing more companies. Such a move would create green jobs, despite the poor economy, Bicker said.

As CleanTECH's support base grows, the organization strives to find ways for its members to collaborate. The nonprofit will help startups with the commercialization process and link solar companies with other members interested in implementing the technology, Bicker said. The goal is to promote clean technology from a business standpoint.

Although CleanTECH is an organization created to advance the interests of the industry, Bicker hopes such technologies will ultimately transform San Diego's landscape and improve the quality of life for residents.

"The green industry is not just about feeling good, feeling like you're helping the environment." Bicker said. "The industry is growing well beyond that."