By ELIZABETH MALLOY and DOUG SHERWIN, The Daily Transcript
Wednesday, May 6, 2009

Ellen C. Revelle, the La Jolla philanthropist and publisher emerita of The Daily Transcript, died Wednesday morning. She was 98.

Described as a “community icon” in La Jolla, Ms. Revelle was involved in dozens of San Diego’s educational and artistic institutions, including the University of California, San Diego, the La Jolla Historical Society, the La Jolla Music Society, the Scripps Institution of Oceanography and the San Diego Opera.

“She was brought up, and she brought us up, to believe in stewardship,” her son, William Revelle, said. “To her, that was fundamental.”

Born Ellen Virginia Clark in the La Jolla guesthouse of her great-aunt Ellen Browning Scripps in 1910, Ms. Revelle grew up largely in Pasadena visiting La Jolla frequently with her family.

After graduating with the first class from Scripps College in Claremont, Calif., which had been founded by her great-aunt, she married Roger Revelle. He would go on to become one of the nation’s most prominent scientists and is credited with discovering the phenomenon of global warming.

“Ellen Revelle was treasured by the Scripps community, not only for her unswerving service and devotion to the college, but for her intellect, her curiosity and her great good humor,” said Frederick Weis, president of Scripps College. “She continued, throughout her life, to be a role model for our students.”

Through her marriage to Roger, Ellen traveled a great deal and lived around the United States and beyond. During World War II, she and her family lived in Washington, D.C. The family moved to Cambridge, Mass., from 1964 to 1978 when Roger headed up the Harvard Center for Population Studies.

In the 1930s, when the Revelles had two of their eventual four children, Roger was offered an opportunity to spend a year in Bergen, Norway. At a memoir writing class she took at UCSD Extension in recent years, Ellen wrote a short story about the experience, which she titled, “It Rains 32 Days a Month in Bergen.” She gave that story to the Wednesday Club, a local women’s group she was involved in, according to the group’s President Linda Fox.

“I always think of her as gracious, and always with a little bit of wit and a wonderful sense of humor,” said Christopher Beach, president and artistic director of the La Jolla Music Society, where Ms. Revelle frequently attended concerts. “They don’t make women like that anymore.” 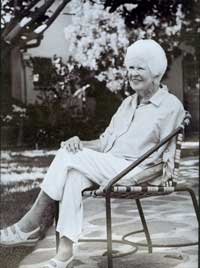 Renown oceanographer Walter Munk, who was heavily influenced by the Revelles, credited part of Roger's success to the unique partnership he shared with his wife.

“I don’t think he would have had his wonderful career without Ellen being there, supporting him all along the way,” said Munk, a research professor of geophysics emeritus at Scripps Institution of Oceanography. “They had a very good partnership.”

Along with her late husband, Ms. Revelle was involved in bringing a University of California campus to San Diego, and in growing the Scripps Institution of Oceanography, which is now part of the university.

“Ellen Revelle was a treasured member of the UC San Diego family,” Fox said. “Through her lifelong affiliation with our campus, Ellen helped Scripps and our community of scholars and researchers to grow and flourish.

“We will forever be grateful for Ellen Revelle’s kindness and support, and the impact she had on our campus and community.”

Dr. Tony Haymet, the director of the Scripps Institution, called Ms. Revelle “the First Lady of Scripps,” and said she was a huge help in convincing foreign scientists to come to the institution with her hospitality.

“Ellen was the welcomer and the fixer and the matriarch at Scripps,” Haymet said. “It’s a very sad day for Scripps.”

In March, Scripps celebrated what would have been Roger's 100th birthday. Former Vice President Al Gore attended the ceremony and collected an award for his work on climate change. Gore had been a student of Roger’s at Harvard, and over the years became close to Ellen.

In a statement to The Daily Transcript, Gore said: “A brilliant woman, passionate supporter of the arts and education, dedicated wife and mother, and good friend, Ellen will be truly missed. Her legacy of service to La Jolla and UCSD will long be remembered.”

“Ellen Revelle was a remarkable woman whose enormous contributions to San Diego will not soon be forgotten,” he said in a written statement. “She not only helped put San Diego on the map as an innovative leader in science and research, but her generous spirit benefited so many organizations and causes, from the theater to education. As owner of The Daily Transcript, she was always held in very high regard by her peers in the media and in the business community for her commitment to quality journalism.

“San Diego owes a debt of gratitude to Ellen Revelle for all she has done for our community and beyond.”

Ms. Revelle remained an active participant in many organizations through her late 90s, including the Revelle College at UCSD.

She regularly attended school banquets and annually held a spring tea on her front lawn for the school’s female graduating class. The school would bus approximately 150 women to her La Jolla home.

“There was a beauty to it that our students felt a part of the tradition and a connection to the founding days of the college,” said Daniel Wulbert, provost of Revelle College.

“She was an engaging person in an intellectual and delightful way. Students would clamor around her. She’ll be missed. She was a value to us.”

Wulbert remembers a particularly fiery introduction she delivered for Gore during an appearance at the school about two years ago. It prompted rousing cheers and laughter from the audience of 5,000.

“You knew that she had gotten older and yet, when you talked with her, you were surprised that you were talking to an active mind,” he said. “Students were always thrilled to sit with her. She was still a very sharp person.”

Though she met and even sometimes entertained dignitaries like Eleanor Roosevelt, John Steinbeck and Jonas Salk, her children said she acted in the same warm, gracious manner with everyone.

“She was very natural with people, regardless of whether they were important or not,” said her daughter Carolyn. “She just kind of chatted on a personal level.”

Her children said her philanthropy widely reflected her interests: music, theater and art. She also loved reading, writing and keeping up with current events. She swam almost every day in the summer in La Jolla Cove until her mid-90s, and she played “a cut-throat game of dominoes,” according to her family.

“She was just going all the time,” her daughter Carolyn said. “We were in awe.”

She even became interested in computers at a time when people many years younger than her were still skeptical of the Internet.

“Probably our best print copy editor, Ellen also embraced the Web and all its technology in a way almost unique to someone of her generation,” recalled Robert Loomis, publisher of The Daily Transcript. “I remember in 1996, at a board meeting, when she told me of her great hopes that e-mail would restore the once great art of letter writing as a means of communication.”

The Revelle family purchased The Daily Transcript in 1986.

“We loved her because she didn’t push people around,” he said. “She made gentle suggestions about making our region a better place to live, and those of us in the media caught on pretty fast. She was persuasive, she was gracious and, we all came to realize, always right.”

Morgan said Ellen, along with her husband, was helpful in San Diego’s emergence as a city from a “country coastal town.”

“I’d say there’s a small precious dozen or two of San Diegans who we can’t get along without, at least we don’t want to risk it, and she’s near the top of my list,” Morgan said. “I think the influence of this little group, of which she was a part, enlightened people all over the region.”

Several groups, like the La Jolla Music Society, said they basically owed their very existence to Ms. Revelle’s support over the years. She held a place of honor at several local artistic institutes.

“We were deeply saddened to learn about the death of Ellen Revelle,” said Ian Campbell, general and artistic director of the San Diego Opera. “Ellen was a 31-year subscriber and generous donor of the company and a cherished friend to all of us. She invested in excellence and wanted to ensure that the classical arts in San Diego were at a level the community deserved. We will dearly miss Ellen and her caring, generous heart.”

“Ellen Revelle helped found La Jolla Playhouse with her drive, passion for the arts, and her generosity,” said Playhouse Artistic Director Christopher Ashley. “She was also one of the most extraordinary people I have ever known, and she will be greatly missed by the entire Playhouse family.”

In 1993, two years after Roger died, Ms. Revelle married Rollin Eckis, a friend and former colleague of Roger’s, who was also the widower of one of Ellen’s childhood friends. The two were married until Eckis’ death in 1999. Though she changed her name to Ellen Revelle Eckis during their marriage, she went back to just Revelle after Eckis died.

John Bolthouse, executive director of the La Jolla Historical Society, said it was hard to put into words how much Ms. Revelle meant to the organization. The group operates out of a property the Revelle family donated, and he said the area was “embedded” within her.

“She was part of La Jolla history,” Bolthouse said. “It sounds hyperbolic to speak in such terms, but she’s one of the icons of the community.

Revelle is survived by her four children, Anne Shumway of Cambridge, Mass., Mary Paci of New York City, Carolyn Revelle of Sausalito, Calif., and William Revelle and his wife Eleanor Revelle of Evanston, Ill., as well as her two step daughters, Nancy Eckis and Ellen Schmitt. There are also 11 grandchildren and 18 great-grandchildren.

A memorial service is planned for 1 p.m. Sunday, May 10 at Sherwood Hall at the Museum of Contemporary Art San Diego in La Jolla. In lieu of flowers, gifts may be given in her honor to support the scholarship fund at Scripps College, Claremont, Calif., to the La Jolla Chamber Music Society, or to Scripps Institution of Oceanography.

I had the pleasure of taking care of Ms. Revelle for about 9 months shortly before her passing. She was such an awesome women. I loved working for her, and loved that she took me to plays while I cared for her. It was a pleasure to have met such an ambitious women. Thank you for your life. M.Mcpeak