By BRIE IATAROLA, Special to the Daily Transcript
Thursday, June 18, 2009

Don Jones understands the need to synchronize the relationship between humans and wireless technologies in the health and life sciences markets, and every step he takes to unite them is boosting his value in San Diego's business community.

Since 1987, Jones' career has revolved around health care-based ventures. For the past seven years, he has worked for Qualcomm Inc. (Nasdaq: QCOM), where he currently serves as vice president of business development for Health & Life Sciences.

One of his objectives is to facilitate the implementation and utilization of Qualcomm's wireless technologies, which he believes are steadily revolutionizing the delivery of consumer health, fitness and traditional health care. Such technologies include remote diagnostics and monitoring systems, particularly those for the elderly; in-body drug delivery systems and sensors; on-body SMART peel-and-stick "Band-Aids"; fitness management devices and applications; wireless-controlled drug delivery; wireless pills; and therapy management systems. 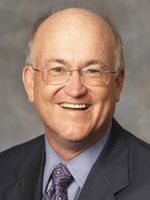 According to Jones, the traditional model available throughout the rest of the world requires "reams and reams of paper," an ample chunk of time, outdated equipment, as well as hope that the patient will experience arrhythmia under a doctor's surveillance. The problem with this approach, he said, is "you're in a hospital lying in bed hooked up to wires. You're not really stressed and you're lying in bed -- not going about your normal life.

"CardioNet's model is much more attractive to the patient and the doctor," he added, because the doctor receives information from a patient instantaneously and effectively. This real-time analysis allows for the immediate implant of a pacemaker or start of a new drug therapy.

Since the company's launch in 1999, Jones noted CardioNet has seen 250,000 patients, gone public and performed clinical trials that indicate its monitoring system is 300 percent more effective at capturing and diagnosing the arrhythmia.

"These are real success stories for the company, San Diego and the wireless health space," he said.

Determined to cultivate a lasting relationship with this industry -- which analysts predict will be worth at least $7 billion by 2012 -- the Jones founded the Wireless-Life Sciences Alliance approximately five years ago. The 50-year-old serves as director of the 501(c)6 not-for-profit trade organization that is independent from Qualcomm.

"I knew in order to help Qualcomm understand the opportunity, I had to introduce (the company) to the health care industry ... and the wireless community," Jones said. "There was a need to bring thought leaders together. Qualcomm, frankly, had no reputation in the industry, and one of my challenges was to figure out how to put both Qualcomm and San Diego's wireless community on the map as the go-to place (that provides) a compatible offering around a wireless diagnostic device. ... We needed people talking about those opportunities."

Discussion is precisely what Jones' alliance generated when he invited approximately 200 executives to attend a convergence summit. Company CEOs brainstormed how to build the infrastructure for a sound wireless health community. They also mulled over what it would mean to have a connected device from clinical and therapeutic perspectives, and how technologies could enhance patient/physician convenience. Rather than discuss the subject theoretically, Jones encouraged attendees to learn from the multitude of companies that have built profitable business models and consumer pay models around the use of wireless solutions.

"My goal was to have them wonder why they were attending and leave thinking they were behind," he said, "and I think we succeeded in that as well."

According to Jones, the alliance -- which now holds four annual conferences and is primarily focused on accelerating "the convergence of dynamic sectors" -- continues to grow dramatically as it adapts to the industry's needs. This year it attracted more than 700 attendees, ranging from CEOs and CFOs to private equity and venture capital groups. The goal for 2010 is to add technical conferences for engineers and branch out to major cities overseas.

"We think there's an opportunity in Europe, the East Coast and Asia," Jones said.

Although health and life sciences industry executives may struggle to accept change, Jones believes the alliance can help them clear any hurdles as they restructure their business models around new technologies.

"I would say there are literally hundreds of medical device and pharmaceutical companies that are working on incorporating wireless into their operations," he said. "A decade out, the question won't be whether wireless is needed."