Shell casings and steel skeletons of bombed-out cars litter coarse roads and garments flutter on clotheslines above walls tagged with Arabic graffiti. By all appearances the scene belongs in a war-torn region of Iraq or Afghanistan, but the cluster of buildings is actually a set used to train Navy SEALs and other special forces personnel.

The Middle Eastern town and another cluster of buildings dressed with the bravado of a South American village comprise the Military Operations on Urban Terrain (MOUT) Training Complex on San Clemente Island. The facility occupies four acres of the approximately 55-square-mile island.

The realism of the training facility prepares soldiers for hazards in regions of the world with landscapes very different from the United States, said Keith Robinson, special operator senior chief for the SEAL unit.

“The people who train here go into harm’s way,” Robinson said. “Our job here is to make sure they have the training they need to survive there.”

The training facility was built in phases, and one of the more recent additions included eight cinder-block buildings: a city hall, hotel, school, open-air market and prison constructed by San Diego-based contractor I.E. Pacific under a $13.75 million contract.

The cinder-block construction is ideal for minimizing damage from the ammunition and bombs that are used during training exercises, Robinson said. The buildings, which range in height from one to five stories, include replaceable doors and vents that allow for bombs to be detonated inside.

The Middle Eastern training village also includes an array of residential structures. The buildings were built several years ago by Strategic Operations, another San Diego-based firm. What appear to be Mediterranean-style apartments are actually shipping containers covered with stucco facades. Many of the buildings are furnished and equipped with secret walls and doors that conceal hiding places, where role players can hide out during exercises. 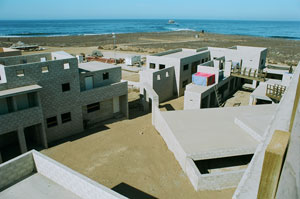 The training facility was built in phases, and one of the more recent additions included eight cinder-block buildings constructed by San Diego-based contractor I.E. Pacific under a $13.75 million contract. Photo: Michael Countis

Construction on the island was met with a variety of logistical challenges. The U.S. Navy ships in all basic supplies, including water. During construction, I.E. Pacific coordinated with the Navy to ship materials by barge and fly in crews.

“Something that cost $1 to build back in San Diego would cost $250 to build out here,” Robinson said.

I.E. Pacific chartered private jets to transport crews to the island for four-day shifts. Each trip on a small plane cost the contractor $700 round-trip, thus to transport a crew of 20 to 30 people, the I.E. Pacific paid approximately $2,000 each week, said project manager Matt Lockwood.

During the six months I.E. Pacific worked on the island, crews worked four 10-hour shifts each week and slept over in barracks used to house special forces personnel while training on the island. The contractor also coordinated the logistics of supplying food and other necessary items to workers.

Materials were shipped to the island primarily by military barge. I.E. Pacific was required to request space on the barge for materials two weeks in advance and have crews present to offload it once it arrived at the island.

The neighboring “South American” village, which is also used for training was recently transformed into a movie set by a Hollywood production company. The village comprises stores, cafés, a church, fruit stand, police station and residential cottages typical of South America and much of the Third World, Robinson said. Shell casings are sprinkled across the uneven dirt streets that are dotted with bicycles and burned-out cars.

Hollywood set builders furnished the interior of many of the buildings and included linens and an array of knickknacks that make the buildings feel lived in. The movie filmed on the island was a collaboration between Bandito Brothers, 20th Century Fox and Legendary Pictures. “I Am That Man” is the working title and the film is expected to be released by April of 2010, Robinson said.

The set helps SEAL trainees learn to cope with the threats created by such environments. The Navy often pipes in sounds such as music and conversations during training after dark to make the environment feel as real as possible.

“When you come in here at night, it is one eerie place,” Robinson said.

When building on San Clemente Island, the Navy must comply with U.S. Environmental Protection Agency regulations. The island is home to several endangered plants and animals.

Though the entire island is a live shooting range and a sizable portion is reserved for ships to practice detonating missiles, many biologists use the picturesque island to conduct research. The MOUT facilities are decorated with fake shrubbery to avoid cross-pollination of native plants.

“Our job is create as much realism as possible without harming the environment,” said Deputy Public Affairs Officer Jeremy Wood.

Send your comments to Monica.Unhold@sddt.com