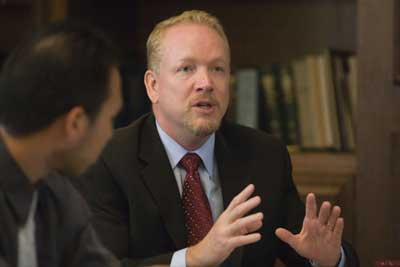 Energy efficiency retrofits have the potential to save homeowners more on their electricity bills for a smaller investment than more popular means, such as installing solar panels. Yet, such projects have not been widely implemented because consumers view them as less appealing, experts said April 6 during a Daily Transcript executive roundtable.

“Solar is sexy; everybody gets solar,” said Courtland Weisleder, founder of Greener Dawn.

Energy efficiency is more difficult to understand because it is less visible -- it can include new windows, insulation and a more efficient ventilation system

Educating homeowners about energy efficiency is difficult because the efficacy of measures depends on a homeowner’s pattern of use. The savings resulting from replacing old windows depends on how often a homeowner uses heating and cooling systems, said Brian Freer, chief sustainability officer for GreenHouse Builders.

“You ask your average homeowner, ‘What is sustainability?’ and ‘solar panels’ is pretty much what they’re going to say,” Freer said.

However, a combination of other products may be less costly and offer greater savings, Freer said. GreenHouse sells a variety of products that may not represent the best cost savings, “but it’s what we’re able to get the consumer to be interested in,” Freer said.

Homeowners are also reluctant to make invisible changes that may have the greatest impact. Rather than replacing windows, homeowners should install insulation.

“Twenty-five percent of your exterior is windows, 75 percent is wall,” Freer said.

Energy audits are a good tool to help homeowners determine which energy efficiency measures will create the largest savings, said Jacques Chirazi, the clean tech program manager for the city of San Diego.

Energy audits will be required before homeowners may opt into the Clean Generation Program, Chirazi said. Set to launch June 14, the program allows homeowners to enter into a special assessment district as a means to secure property tax-tied financing for solar panels and other improvements that increase energy efficiency.

The program will put such improvements well within reach of the average homeowner.

“What we’re trying to do is break those barriers of entry,” Chirazi said.

The recent boom in such government incentive programs may prove problematic for the developing clean technology industry, said Klaus Reichardt, founder and CEO of Waterless Co. Companies that offer products only viable with incentives may become dependent on government help.

“What renewable energy gets is a drop in the bucket compared to what the fossil fuel energy gets,” Hall said.

The legislation will attach a zero to 100 score to each building. Owners must display the score in the lobby of a building; similar to the way California Food Facility Ratings are displayed in restaurants.

“The commercial guys are all worried because you try to sell a building, it turns out to be a ‘40’; is that going to be worth as much as the 80 across the street?” Weisleder said. “That changes the game for commercial real estate.”

The concern is a legitimate one. Companies typically find customers will choose green products when the price is comparable to a traditional product, said Keith Schneringer, marketing manager for WAXIE Sanitary Supply.

With its line of cleaning products, WAXIE Sanitary Supply finds that customers will choose a more sustainable product when the price point is on par with the other products, Schneringer said.