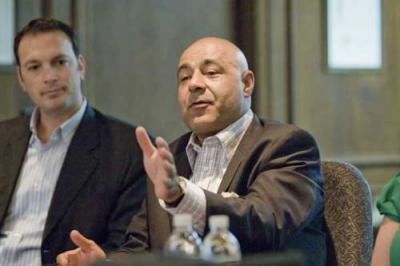 Hotel revenues and occupancies may have been hit by the recession and people are going out less, but optimism remains.

The state of the hospitality industry was addressed during a roundtable discussion at The Daily Transcript this week.

"It's been a challenging year but we're fairly optimistic," said David Cohn, Cohn Restaurant Group president and founder. "People are still going out for special occasions."

Cohn, who has restaurants all over the city with 14 different concepts, said if he has seen any weakness in his restaurants, it has been in the Gaslamp Quarter, which he concedes might have too much competition for its own good.

"There are many areas that are 'over- restauranted,'" Cohn said.

Plenty of hotels, meanwhile, including troubled assets such as the Hotel Se -- now in Chapter 11 bankruptcy -- and the W, in the process of being handed back to its lender, were also constructed at the peak of the market.

Both the Se and the W can no longer cover their debt service.

"The occupancy is coming back, but it's at the expense of rates," said Rusty Middleton, Andaz San Diego general manager.

"Everybody is going to do more with less," Nathan said.

John Gates, the Rancho Bernardo Inn general manager who admitted that the fine dining segment of his business has been hurt, said he has cut back his staff.

A down economy isn't the only force at work.

Jim Unger, a Hornblower Cruises & Events vice president, said another problem is what he calls the "AIG effect."

That's the bad publicity that results from corporate travel that is perceived as a junket.

"Companies are steering clear of these events ... As an industry we need to do a better job of making it clear that these meetings aren't viewed as over-the-top parties," Unger said.

Todd Shallan, Hotel Del Coronado general manager, said while his corporate business took a huge hit in 2009, and last year was one of its worst ever, it has been on the mend since.

"We started to notice our sales meetings pick up in February," Shallan said.

The revenue per available room may not be what it once was and restaurants may have had to reduce their prices and staffs, but Mohsen Khaleghi, Hyatt Regency Mission Bay Spa & Marina general manager, said the power of positive thinking will keep these businesses alive and thriving.

"We've got to stop talking doom and gloom. Occupancy is up, demand is great, rates are fluctuating but are coming back, and we've got to sell our destination," Khaleghi said.

"So much of this is psychological," Cohn agreed.

Cohn has had to be nimble. He said he was adjusting the prices on his new Oceanside restaurant menu within two weeks of opening.

The restaurant business has been said to be difficult in the best of times, but Cohn suggested even if many fail, most of those spaces will be re-filled in relatively short order.

"They're generally not vacant for every long," Cohn said. "I didn't get that sense in Las Vegas when I was there. It felt desperate."

Jim Oddo, Town & Country Resort & Convention Center COO, who said he too has a cautious sense of optimism, said a "a rising tide seems to be floating all boats."

Megan Capizzi, Seaport Village marketing manager, said her sales are up about 3 percent and her traffic is up about 30 percent over last year.

Capizzi isn't completely pleased, however; she said the loss of some day visitation cruise ships has cut into her business somewhat, but the vacancy at Seaport remains nil.

What are hospitality companies doing to stay competitive?

In the case of the Hotel Del Coronado, it has meant the expenditure of $40 million on renovation work.

"And in 2011 we do the Victorian rooms again," Shallan said.

This doesn't include the planned expansion of the hotel to include 144 condominium units.

While restaurant and hotel operators proceed with their plans, the fickle winds of the hospitality industry have continued to swirl around them.

"We expect to see a lots of hotels changing hands within the next couple of years," Shallan said.

And then there is the estimated $1.7 trillion worth of commercial mortgage-backed securities debt set to mature within the next four years -- much of which are backed by troubled hotels.

Nathan said if he sees a danger, it is in the area of tribal casinos in San Diego County that may be saddled with CMBS debt that may not be serviced, due to declining casino and casino-oriented hotel revenues.

"This is going to start to become more prevalent," Nathan said.