California, perpetuated by a youthful generation’s enthusiasm for cars, was at the center of the new car culture in the 1950s. During that time, thriving dealerships along National Avenue (now National City Boulevard) formed the National City Mile of Cars. Over the years it grew into one of the most successful new car dealer associations in the country. For the past 15 years, Weldon Donaldson has shaped the “Mile” brand, making sure it is represented in the best possible light through advertising and marketing.

Donaldson, 74, exudes warmth, friendliness and candor. Proud to be an American, pleased and proud to live in San Diego, he characterizes himself as a good guy, one who lives by the golden rule.

He grew up in a small town near El Paso, Texas, and met his wife of 52 years in seventh grade. He put himself through college selling radio advertising and got his degree in economics from what is now the University of Texas at El Paso. After serving as a missile officer in the U.S. Army from 1959 to 1961, he returned to advertising where he worked at the ABC affiliate in El Paso for nine years.

Father of three grown children and two granddaughters, all of whom reside in the area, Donaldson said he got lucky when he was offered a job at KFMB TV in 1970. He spent 25 years there as the sales manager before going into business for himself as a consultant. 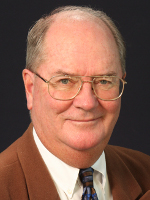 “It was during that time that the Mile of Cars Association asked if I’d take over their advertising, public relations and marketing,” Donaldson said.

The Mile of Cars is a business improvement project established by National City. The association is currently home to 17 new car franchises run by 15 owners who contribute financial resources based on taxable sales to pay for marketing and advertising.

As its executive director, Donaldson supervises the association’s advertising efforts, ad buys and creative content. He said the association runs about 7,200 TV commercials and 2,000 radio spots a year, in addition to occasional print advertising.

He also takes care of community relations and is vice chair of the National City Chamber of Commerce. He said the association strives to maintain a good relationship with the military, one of their largest customer bases.

“Our dealers maintain a policy of treating them fairly and making sure they get their money’s worth,” he said.

Like many other businesses, dealers on the Mile have struggled during the recession. The association continued advertising, which Donaldson believes is crucial to weathering tough economic times. Dealers have also pared down their inventories and looked for other ways to operate more efficiently.

Dealership sales figures are proprietary, but according to Donaldson, at its peak in 2007, the Mile sold 25,000 vehicles. That year taxable sales were close to $500 million. Last year vehicle sales had dropped to 19,000.

Like its county competitors, Carlsbad’s Car Country and Escondido’s Auto Park, the Mile has seen its share of closures. According to Donaldson, the Volvo dealership pulled up stakes before the recession. Since then, the Dodge dealership was sold to McCune, both Buick and GMC dealerships closed, and most recently, the Subaru dealer.

“I don’t think we’ve been hurt any worse than anyone else,” said Donaldson.

The association sells very few cars to National City residents, though most of its customers live south of Interstate 8. Donaldson said the biggest challenges lie in getting potential customers to drive to the Mile of Cars and getting dealers to price cars attractively.

In addition to his consulting work with the association, Donaldson is past president and current board member of the Holiday Bowl. He said one of his most important roles during retirement is serving on the board of trustees of the San Diego Zoo. And although he waxes nostalgic about afternoons he spent as an 11-year-old soda jerk making chocolate malts, banana splits and sundaes at the local drugstore, his enthusiasm for advertising -- a career he said has been very good to him -- is unwavering.

“It makes me feel good to help people,” Donaldson said. “I’ve been very fortunate in my career to be able to help people’s businesses a lot by counseling them on advertising and I enjoy it.”

Feb. 28, 2011 -- Transcript Top Influential Weldon Donaldson, executive director of National City Mile of Cars, talks about being "the only one left" in the region.